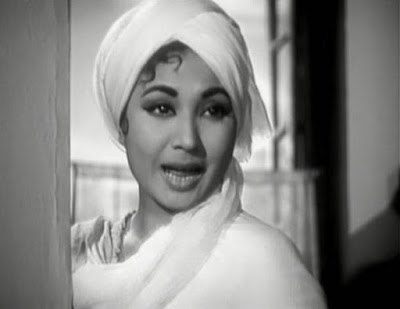 Today on 45th death Anniversary we remember Meena Kumari.She is regarded as one of the greatest actresses to have appeared on the screens of Hindi cinema,Meena Kumari (1 August 1932 – 31 March 1972)-The Tragedy Queen of Bollywood.
Meena Kumari was born with the birth name Mahjabeen into the family of Ali Bux and Iqbal Begum on 1 August 1932/33.Little mehjabeen embarked on her acting career at the age of six, she was immersed in work over next four years, as child artist mostly in Vijay Bhatt productions Leatherface (1939), Pooja (1940), Nai Roshni (1941), Bahen (1941), Kasauti (1941) and Garib (1942).Vijay Bhatt became her mentor and, on the sets of Ek Hi Bhool (1940), rechristened Mahjabeen as Baby Meena
She became heroine at the age of 14,Bachhon Ka Khel(1946) was his first film as heroine.Same year her another film  Duniya Ek Sarai (1946), Piya Ghar Aaja (1947) and Bichchade Balam (1948) performing with credit and winning recognition from all in the industry.
On 14 February 1952 Meena Kumari age 19 and Kamal Amrohi age 34 secretly married in a simple 'Nikah' Cermoney, in the presence of a Qadi and Kumari's younger sister Mahaleka(madhu). The marriage was kept secret from family and media.Though Kamal Amrohi was already married and had three childrens. 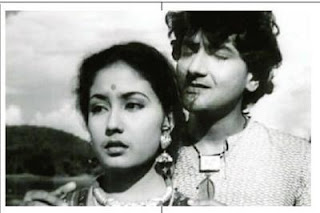 1952 was a milestone in the life of meena Kumari,she not only married that year but also she got stardom with the release of Baiju Bawra. Meena Kumari won the first ever Filmfare Best Actress Award for Baiju Bawra on 21 March 1954 at the Metro Theatre in Bombay.The film celebrated diamond jubilee. The film was a musical, set up in Mughal India of 16th Century, with classical Hindustani melodies set by Naushad Ali.
Some of her best known films were  Parineeta, Baadbaan,Sharada ,Sahara ,Chirag Kahan Roshni Kahan ,Sahib Biwi Aur Ghulam, Aarti, Main Chup Rahungi.,Dil Ek Mandir,Kaajal and Pakeezah 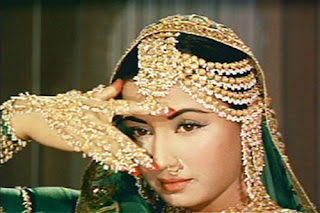 Meena Kumari  became addicted to alcohol. Her life and prosperous career were marred by heavy drinking, troubled relationships, an ensuing deteriorating health, and her death from liver cirrhosis in 1972.
She got burried at Shia Cemetry Mazgaon Mumbai.Her real name is carved in Urdu on the marble, her assumed name in English and Hindi is written in black paint. 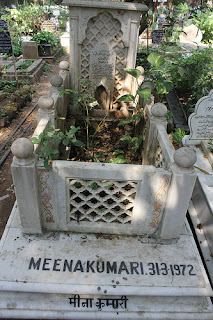 Some of the Hit Songs of Meena Kumari

Mausam Hai Aashikana  from Pakeezah
Posted by /bolywoodfiles.blogspot.com at 14:38:00 No comments:

A Musical Tribute To ANAND BAKSHI on his 15th Death Anniversary 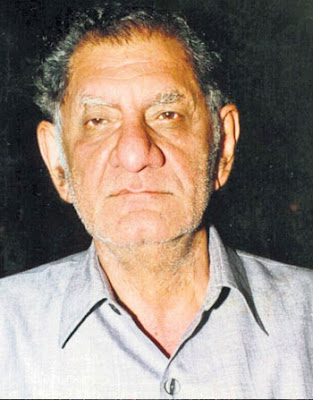 Anand Bakshi (born on 21st July 1920-Died on 30th March 2002) was a Lyricist of Bollywood Films.Anand Bakshi penned some of the most memorable songs that has ever been produced by the Hindi film industry.With over 600 films to his credit and having worked with the best Music Directors in the Hindi film industry,He made a hit Jodi with Lakshmikant Pyarelal and later with R D Burman,in this Blog I am discussing his association with R D Burman. 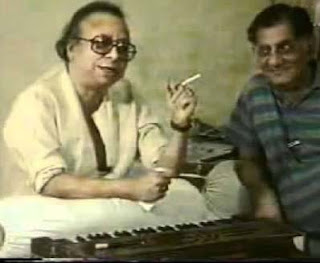 Anand Bakshi and R D Burman worked jointly in 84 films.The first time they worked jointly in 1965 film Teesra Kaun starring Feroz Khan and Kalpna .The song "Pyar Ka Fasana Bana Le Dil Deewana" sung by Lata and Mukesh became popular.But both of them clicked together with Kati Patang(1970) starring Rajesh Khanna and Asha Parekh.All the songs written by him were instant hit.After that came Hare Rama Hare Krishna(1971) and the song Dum Maro Dum became the song of the year.This year was very good for both,6 films were released that year,Amar Prem(1971) with the song Chingari Koi Bhadke became very popular.
In 1972, 4 films of them released,songs of Jawani Deewani,Seeta Aur Geeta and Apna Desh were highlight of that year. 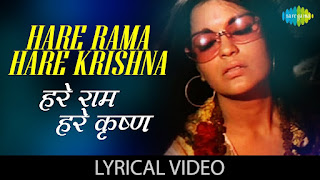 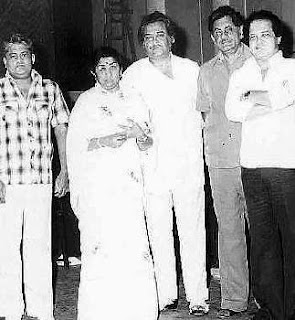 Though Anand Bakshi was writing songs for many Music Directors since 1956  but he had to wait till 1969 for an opportunity to work with SD Burman. It is well known that RD Burman played an important role in the music of Aradhana (1969) After that he went on to work with SD Burman in many other films including Anurag (1972), Jugnu (1973), Prem Nagar (1974) and Chupke Chupke (1975),

Posted by /bolywoodfiles.blogspot.com at 16:55:00 No comments:

50 years of An evening In Paris

An Evening In Paris was released on 1st Jan 1967.It was  produced and directed by Shakti Samanta with story by Sachin Bhowmick. It revolves in the French capital city of Paris. The movie stars Shammi Kapoor, Sharmila Tagore in a double role, Pran as the villain, and Rajindernath in the comic subplot.The foreign locations and its music were the highlight of this film.Beside these the appearance of Sharmila Tagore in a Bikini was also the talking point.it was a first time the Hindi Cinegoers saw a heroine in Bikini in Hindi Films. Wearing a bikini put her name in the Indian press as one of Bollywood's ten hottest actresses of all time,The film was a big hit. 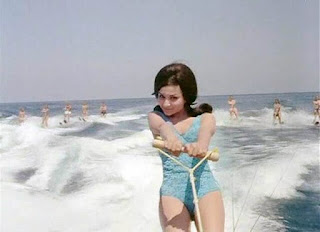 The film begins with a monologue on how a rich heiress who has been in love thrice, moves to Paris to find the true love which she feels she cannot find in India. On one of her outings, Deepa meets Shyam/Sam (Shammi Kapoor), who immediately falls in love with her and begins to follow her around. After some initial resistance, Deepa eventually gives in to his charms. 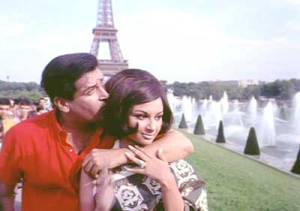 In Paris she meets Shyam (Pran) who is her father's secretary's son,Who needs money to clear his gambling debts,he plans to marry her.Since Deepa does not love him, she refuses telling him that she only loves Sam. 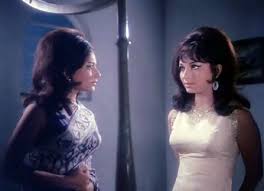 Shekher finds a girl Suzy who looks similar to Deepa and shows her Deepa with Sam, so that she can learn her mannerisms.Later he kidnaps Deepa then puts Suzy in her place at her home.
Deepa's father learns of Deepa's kidnapping and flies to Paris. He and Sam discover that Suzy is Deepa's lost twin sister, who had been kidnapped when she was very young and her real name is Roopa. Deepa's father is overjoyed that he has found his daughter, but Suzy refuses to accept herself as his daughter. 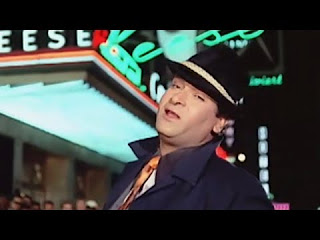 In the mean time Suzy also started loving Shyam,He tells her that he loves Deepa he needs her help to find Deepa.This angers Suzy at first but later she realises that she should not come between her sister and her love.
Near climax real Deepa (pretending to be Suzy) escapes from.the clutches of Shekher but Shekhar reaches the boat where Deepa is waiting for Sam and drives off with her. Sam also reaches just after Shekhar drives off. He jumps in the boat from a helicopter and beats Shekhar up. Sam throws him overboard where he floats over the waterfall. Deepa and Sam escape to a small rock in the middle of waterfall from where they are rescued by the helicopter.

Audiance really enjoyed the helicopter chase and the song aasman se aaya farishta.We’ve had a lot to look at, after all, and that’s really all Shammi and the filmmakers promised.

Posted by /bolywoodfiles.blogspot.com at 17:30:00 No comments:

Then came Shammi Kapoor's thriller, An Evening in Paris (1967). It was shot entirely abroad. Paris being the focal point, the movie also had some significant part shot in Switzerland

Dev Anand was next who explored Switzerland. In his directorial debut Prem Pujari (1970), Dev Anand followed the trend. He shot several scenes and a famous song inside Switzerland.

In 1970 Yash Chopra came to Switzerland for his honeymoon .He was so  mesmerised by the landscape, he turned to Switzerland regularly for his movies which he produced under his banner Yash Raj Films.First time it was in Silsila he picturised a song on Amitabh Bachchan with Rekha beside Amsterdam
Song from Silsila 1981

The 1989 blockbuster Chandni had made headlines because of Sri Devi’s costumes. But the scenic beauty of Switzerland in the scenes can not be missed. The iconic lake Alpenrausch was one of the few locations of the shoot

Hundreds of Indian movies have been shot to this date, but the 1995 hit Dilwale Dulhania Le Jayenge (produced by Yash Chopra) happens to be the today's generation most famous movie shot in Switzerland.Part of the song "Zara Sa Jhoom Loon Main" was shot in the main promenade of Gstaad, a tiny-yet-charming village in western Switzerland

Song from Biwi No 1

Lake Thun,in Switzerland is more popular with movie lovers, given the fact that the famous Humko Humise Chura Lo song from a Bollywood classic Mohabbatein was shot here.

2001 film Jodi No 1 starring Govinda was also shot here,Govinda danced to woo in Jodi No. 1 at Rougemont Castle  the song Meri Mehbooba was picturised here
Song from Jodi No. 1

Gstaad is renowned as the ‘romantic haven’ for globe trotters across the world; a town where many a sweet verses have been sung and re-lived for decades.After DDLJ ,in 2008 film Bachna ae Haseeno the same town was selected for the song Aahista Aahista that was  featured in  Bachna ae Haseeno, another romantic movie with heart throb Ranbir Kapoor and three leading Bollywood actresses
Song from Bachna ae Haseeno 2008

Posted by /bolywoodfiles.blogspot.com at 19:13:00 No comments: 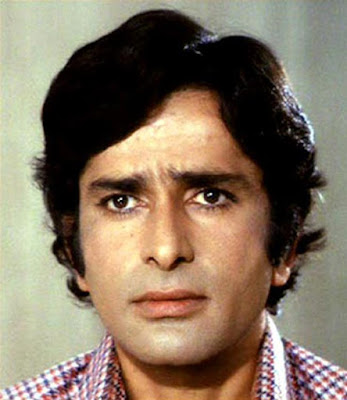 Born on 18 March 1938,Shashi Kapoor turns 79 today.He is the 3rd and the youngest son of Prithviraj Kapoor; the younger brother of Raj Kapoor and Shammi Kapoor. 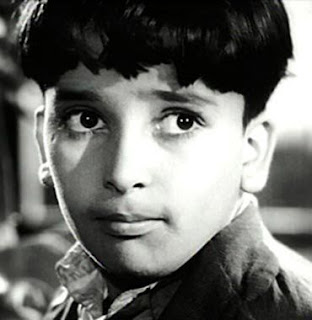 From the age of four, Shashi Kapoor acted in plays directed and produced by his father Prithviraj Kapoor.He first appeared in films in the 1948 film AAG where he played the younger version of the characters played by his eldest brother Raj Kapoor and then he appeared  in Sangram (1950), where he played younger version of Ashok Kumar. He worked in four Hindi films as a child artist from 1948 to 1954.
He made his debut as a leading man in the 1961 film Dharmputra and went on to appear in 116 Hindi films, including 61 films as the solo lead hero and 55 multi star-cast films, 21 films as supporting actor and special appearance in 7 films.He also acted in English language films, which include The Householder and Shakespeare-Wallah. 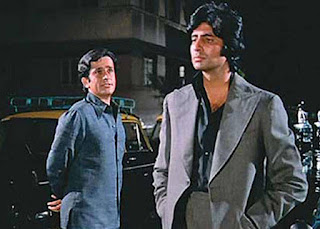 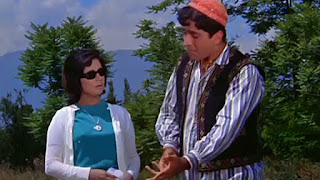 In the 60s he was paired with Nanda and both gave many Hit films, Jab Jab Phool Khile (1965) was prominent among them.Later he formed on screen pairs with Raakhee, Sharmila Tagore, Zeenat Aman from the late sixties to the mid eighties.
In 1978, he set up his production house, Film Valas, which produced critically acclaimed films such as Junoon (1978), Kalyug (1981), 36 Chowringhee Lane (1981), Vijeta (1982) and Utsav (1984).In 1991 he produced and directed a fantasy film titled Ajooba which had his frequent co-star Amitabh Bachchan and nephew Rishi Kapoor in the lead.
In 2015, he was awarded the 2014 Dadasaheb Phalke Award, making him the third member of his family to receive the highest award in Indian Cinema after Prithviraj Kapoor and Raj Kapoor.He got theFilmfare Best Supporting Actor Award in 1976 for Deewar.He also recieved  Filmfare Best Movie Award for Junoon 1980 and Kalyug 1982.He got National Film Award for Best Actor for New Delhi Times in 1986 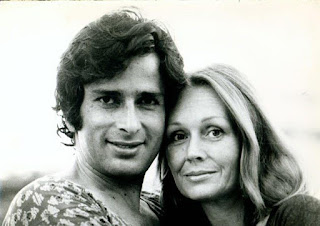 He met English actress Jennifer Kendal in Calcutta in 1956 while both were working for their respective theatre groups. Shashi was both assistant stage manager as well as an actor for his father's theatre group, Prithvi Theatre. Geoffrey Kendal's Shakespearean group was also present at the same time in Calcutta and Jennifer was Geoffrey's daughter. After their subsequent meeting, the couple fell in love and after facing initial opposition from the Kendals and support from sister-in-law Geeta Bali, they got married in July 1958. They had three children: Kunal Kapoor, Karan Kapoor and Sanjana Kapoor. Jennifer and Shashi established Prithvi Theatre on 5 November 1978 in Mumbai. Jennifer died of cancer in 1984 which shattered him.After that he was not active as an Actor.
For the last few years his health is not permitting him to appear in Public,He recieved Dada Saheb Phalke Award on Wheel Chair assisted by his daughter. 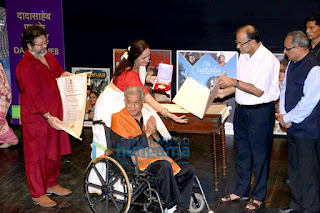 Some of Shashi kapoor's Hit Songs

Posted by /bolywoodfiles.blogspot.com at 22:02:00 No comments: