A Journey from Baby Mumtaz to Madhubala 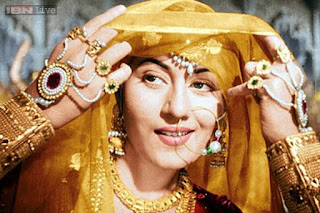 Madhubala (14th Feb 1933 – 23 February 1969 ) started acting at the age of seven and made her first film for Bombay Talkies, where she had to sing a song – ‘Mere chhote se man me, chhoti si duniya re’. She was called Baby Mumtaz. She worked as Baby Mumtaz in many films such as Pujari, Phoolwari, and Rajputani.
She was spotted by Kidar Sharma and paired her as heroine opposite Raj Kapoor in Neel Kamal(1947). She was barely 14 years old and he named her Madhubala.
A couple of years later, Kamal Amrohi cast her opposite Ashok Kumar in Mahal and a star was born. She became everyone’s darling and the industry crowned her ‘Venus of the Indian Screen’, She was now the preferred heroine of Dilip Kumar and Dev Anand. 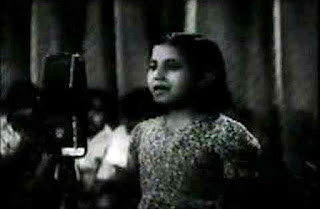 Her first film with Dilip Kumar was Tarana. They went on to do three more – Sangdil, Amar and Mughal-e-Azam. The latter was also her last film before she was bedridden.
With Dev Anand, she worked in 6 films. The first film they did together was" Nirala "released in 1950, the other films were  Aaram (1951), Naadan (1951), Kala Pani (1958), Jaali Note (1960), and Sharabi (1964)
During the career span of 22 years, she appeared in around 73 Hindi films. She worked with all the leading heroes of their time. Madhubala's co-stars Ashok Kumar, Raj Kapoor, Rehman, Pradeep Kumar, Shammi Kapoor, Dilip Kumar, Sunil Dutt, and Dev Anand were the most popular actors of that period. She also appeared with notable leading ladies such as Kamini Kaushal, Suraiya, Geeta Bali, Nalini Jaywant, Shyama and Nimmi. The directors she worked with, Mehboob Khan (Amar), Guru Dutt (Mr. & Mrs. '55), Kamal Amrohi (Mahal) and K. Asif (Mughal-e-Azam), were amongst the most prolific and respected. Madhubala also became a producer and produced films like Naata (1955) and Mahlon Ke Khwab (1960) and acted in both the films.
Madhubala gave a flamboyant performance in Guru Dutt's satire Mr. & Mrs. '55 (1955). The film revolves around Anita, a wealthy heiress, and a struggling cartoonist, Pritam (Guru Dutt). Mr. & Mrs. '55 has hit songs, "Jaane Kahan Mera Jigar Gaya Jee" (a duet sung by Geeta Dutt and Mohammed Rafi) and "Thandi Hawa Kali Ghata" (sung by Geeta Dutt). Mr. & Mrs. 55 was the fifth highest-grossing film of that year. She also acted in costume dramas such as Shirin-Farhad (1956), Raj-Hath (1956) (both with Pradeep Kumar).] Dhake Ki Malmal was a romantic musical comedy directed by J.K. Nanda and produced under the Nanda Film banners. The film starred Madhubala and Kishore Kumar together for the first time. Both of them later acted in several popular "musical comedies" such as Chalti Ka Naam Gaadi (1958), Jhumroo (1961) and Half Ticket (1962).
The love with Dilip Kumar is well known but they couldn't marry. Madhubala met Kishore Kumar during the shooting of Dhake Ki Malmal (1956). In 1960, Madhubala married him when she was 27 years old. When Madhubala was ill in the late 1950s with the congenital heart disease, Kishore Kumar proposed to her and she decided to marry him after realizing that Dilip Kumar was not going to marry her.
Madhubala had a ventricular septal defect (a hole in her heart) In 1969, she was set to make her directorial debut with the film Farz aur Ishq. However, the film was never made, as during pre-production, she died on 23 February 1969, shortly after her 36th birthday. The cause of death was determined to be the prolonged lung and heart illness

Posted by /bolywoodfiles.blogspot.com at 09:39:00 No comments: