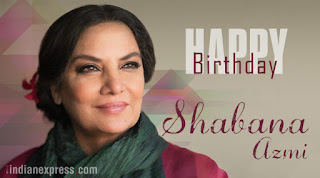 Shabana Azmi (born 18 September 1950) made her big-screen debut with Shyam Benegal’s first film Ankur in 1974. With this film started a trend of Art Cinema or Parallel Cinema in Bollywood. The film went on to become a major critical success, and Shabana Azmi won her first National Film Award for Best Actress for this film. The very next film of her was Dev Anand's Ishk Ishk Ishk in which she had a small role but in the next year in 1975 she appeared in Nishant which was again an Art film, her acting was appreciated in this film.
Since then she appeared in both commercial cinema as well as Art cinema. She has acted in more than one hundred Hindi films. Real-life portrayals continued in almost all of her movies. Shyam Benegal's Nishant (1975), Junoon (1978), Susman (1986), and Antarnaad (1992); Satyajit Ray's Shatranj Ke Khilari (The Chess Players); Mrinal Sen's Khandhar, Genesis, Ek Din Achanak; Saeed Mirza's Albert Pinto Ko Gussa Kyon Aata Hai; Sai Paranjpye's Sparsh and Disha; Gautam Ghose's Paar; Aparna Sen's Picnic and Sati; Mahesh Bhatt's Arth; and Vinay Shukla's Godmother are some of her notable films.
Shabana Azmi ruled Indian 'Parallel Cinema' for 30-years. She hit her peak during the ’80s, wowing the audience with memorable performances in Sparsh (1980), Arth (1982), Masoom (1983) and Mandi (1983), playing difficult characters with consummate ease.
She has been a committed social activist, active in supporting child survival and fighting AIDS and injustice in real life Azmi has voiced her opinion on a variety of issues. Initially, her activism drew skepticism and was dubbed by some as a publicity gimmick. However, she proved her critics wrong and used her celebrity status to emerge as a high-profile social activist.
Since 1989, she has been a member of the National Integration Council headed by the Prime Minister of India; a member of National AIDS Commission (of India); and was nominated (in 1997) as a member of the Rajya Sabha, the upper house of the Indian parliament. In 1998, the United Nations Population Fund appointed her as its Goodwill Ambassador for India.
In appreciation of Shabana Azmi's life and works, the President of India gave her a nominated (unelected) membership of the Rajya Sabha, the upper house of parliament.
She is the daughter of great poet Kaifi Azmi and married to Javed Akhtar who is also a great name in Bollywood.
Some of the songs from Shabana's Films
Song of Fakira 1976

Posted by /bolywoodfiles.blogspot.com at 11:34:00 No comments: 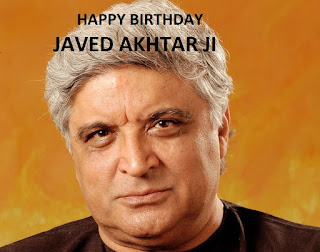 Javed along with Salim were the Super Star Jodi of Bollywood in the 70s. Rajesh Khanna is credited with giving Salim Khan and Javed Akhtar their first chance to become screenplay writers by offering them work in Haathi Mere Saathi.Before that both were employed by G P Sippy in their story department.He along with Salim the father of Salman Khan gave the film industry The Angry Young Man Amitabh Bachchan. His association with Salim Khan lasted until 1980. After this Akhtar wrote some scripts on his own, but mostly moved into writing lyrics for films, in which he achieved success.
He was born on 17th Jan 1945 as Jadoo Akhtar in Gwalior, (Madhya Pradesh) to Jan Nisar Akhtar, a Bollywood film songwriter and Urdu poet, and singer Safia Akhtar, a teacher and writer. Akhtar's early years were spent in Lucknow, Aligarh and Mumbai, mostly with relatives. He was a gifted debater in college, he won the Rotary Club Prize frequently.
He  arrived in Mumbai on 4 October 1964. In his early years living in Mumbai, he managed to write the dialogue for a minor film for Rs. 100. Occasionally, he used to work as an assistant. He got a job as a scriptwriter on Yakeen which flopped. Akhtar then joined with his friend Salim Khan to develop the story for Adhikar.
Their first big success was the script for Andaz, followed by Adhikar (1971), Haathi Mere Saathi and Seeta Aur Geeta (1972). They also had hits with Yaadon Ki Baaraat (1973), Zanjeer (1973), Haath Ki Safai (1974), Deewaar (1975), Sholay (1975), Chacha Bhatija (1977), Don (1978), Trishul (1978), Dostana (1980), Kranti (1981), Zamana (1985) and Mr. India (1987). They have worked together in 24 films including two Kannada films – Premada Kanike and Raja Nanna Raja. Of the 24 films they wrote, 20 were hits.
Javed is a Urdu poet before writing songs for films he was writing poetry.It was Yash Chopra who insiisted him to write songs for his film Silsila(1981).After that he gave us many memorable songs He won 5 National Awards for his songs and also 5 Filmfare Awards for lyrics. In 2013, he received the Sahitya Akademi Award in Urdu, India's second highest literary honour, for his poetry collection Lava.
He was also nominated a Rajya Sabha MP.from Nov 2009 to Nov 2015.
He married to Honey Irani, with whom he had two children, Farhan Akhtar and Zoya Akhtar, both film directors and actors. The father-and-son duo have worked together in films such as Dil Chahta Hai, Lakshya, Rock On!! and Zindagi Na Milegi Dobara with Zoya.He divorced Irani and later married Shabana Azmi, the daughter of eminent Urdu poet, Kaifi Azmi.
Some of his Award Winning Songs 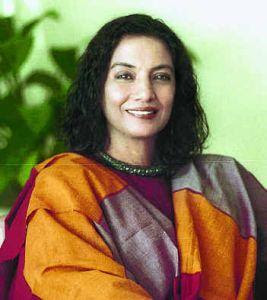 Shabana Azmi is the only actor to win the National Award for Best Actor five times. She won it for her first release, Ankur, in 1974. She went on to win the National Award for three consecutive years, from 1983 to 1985, for her notable work in the films Arth, Khandhar, and Paar.Today on her 67th Birthday(born on 18 September 1950) I wish her a Happy Birthday and discuss her 5 Memorable Roles.
The daughter of poet Kaifi Azmi and stage actress Shaukat Azmi, she is the alumna of Film and Television Institute of India of Pune. Azmi made her film debut in 1974 and soon became one of the leading actresses of Parallel Cinema.Her first release, however, was Shyam Benegal's directorial debut Ankur (1974).though she signed K A Abbas film Faasla and began work on Kanti Lal Rathod's Parinay as well.
She was a graduate in psychology from St. Xavier’s College, Mumbai, before her acting stint. She watched Jaya Bhaduri in a film and was so enthralled by the actor’s performance that she decided to enroll herself in the Film and Television Institute of India (FTTI), Pune. She topped the list of successful candidates of 1972.
She has acted in more than one hundred Hindi films, both in the mainstream as well as in Parallel Cinema. Several of her films have received attention in the international arena and Scandinavian countries, including at the Norwegian Film Institute, the Smithsonian Institution and the American Film Institute. She has appeared in a number of foreign films,
Five memorable roles 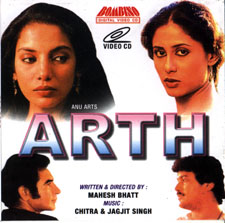 Mahesh Bhatt's `Arth' wher she plays the role of Puja whose husband falls in love with another woman and leaves her.that  role of her  I cherished the most
Khandahar 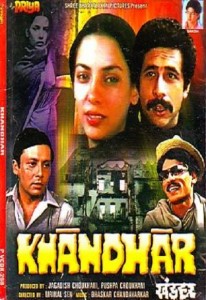 In this film she played the role of Jaimini For this role she was given National Award. 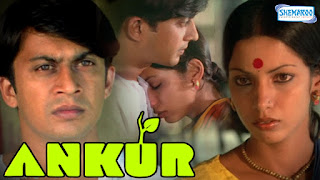 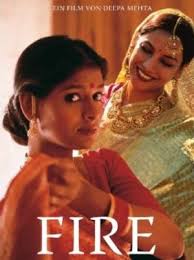 a Deepa Mehta's Film in which she portrayed Radha,It was one of the first mainstream Bollywood films to explicitly show homosexual relations.
Morning Raga 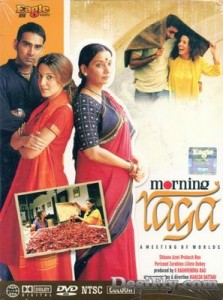 She played the role of  Swarnalata who is a classically trained Carnatic singer who lost her son and best friend, Vaishnavi in a bus accident. Shabana Azmi trained intensively in Carnatic music before she was allowed to sing during the film.

She has been a committed social activist, In 1989, along with Swami Agnivesh and Asghar Ali Engineer, she undertook a four-day march for communal harmony from New Delhi to Meerut. Since 1989, she has been a member of the National Integration Council headed by the Prime Minister of India; a member of National AIDS Commission (of India); and was nominated (in 1997) as a member of the Rajya Sabha, the upper house of the Indian parliament. In 1998, the United Nations Population Fund appointed her as its Goodwill Ambassador for India.
Posted by /bolywoodfiles.blogspot.com at 11:20:00 No comments: