INDEEVAR- The Most Underrated Lyricist 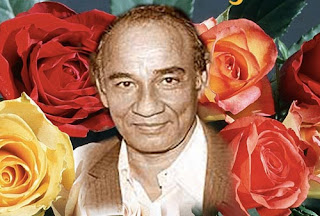 Indeevar who wrote more than 1000 songs for Bollywood Films was not given his due he deserved.He had a wide range,penning emotionally uplifting songs, Indeevar also wrote peppy numbers including Nazia Hassan’s sung “Aap Jaisa Koi” and Feroz Khan’s Qurbani song “Laila O Laila”.
Indeevar was born on 1st Jan in 1924 as Shyam Lal Babu Rai  and grew up to become a freedom fighter. He wrote under the pseudo name of Azad for which he was imprisoned by the British. He became a household name with the release of the song "Bade Armano Se Rakhha Hai Pehla Kadam"  from Malhar in 1949.

It was singer Mukesh who gave him the break as a lyricist from the film Malhar(1949) which was produced by him and composed by Roshan.He along with Music Director Kayanji Anandji gave many hit & memorable songs.

It was Indeevar with whose lyrics Laxmi-Pyare made their debut in ‘Parasmani’ I don’t have to quote the songs. They were so beautiful. In ‘Madari’ too the Lata song, ‘Pyar mera majboor pardesi piya’ was a big hit.. In ‘Dulha Dulhan’ Indeevar wrote that classic Mukesh number: ‘Jo pyar tu ne mujh ko diya hai’ and ‘Hum ne tum se pyar kiya hai jitna kaun kare ga itna’. 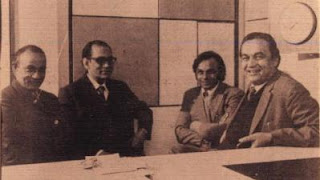 The songs of ‘Chotey Babu’, ‘Himalaya Ki God Mein’ and Saheli were also big hits. But Upkar came as a major hit in his career too. How can we forget, among other hits of the movie, that sad number by Manna Dey for Pran: ‘Kasme wade pyar wafa sab baaten hain baton se kya’
In ‘Poorab aur Pachchim’ too Indeevar created havoc with his lyrics, specially the song, ‘Koi jab tumhara hridaya tod de, ‘ 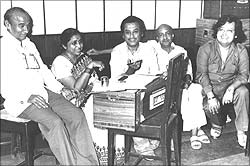 He wrote for almost all the music directors of his time except S D burman.With the arrival of the disco beat and the Bhappi Lahiri wave, Indeevar put poetry on the backburner and stood up to the task of delivering mindless lyrics. There was a preset combination for all these Southern-style 'pots-n-pans' hits: Jeetendra, Sridevi, Jaya Pradha, Bhappi Lahiri and Indeevar. All the way from Himmatwalas' (1983) ‘Nainon Mein Sapna’ to Tohfa's nonsensical title song, Indeevar willfully accepted and adapted to the changing trends in film music.
Towards the end of his career, he notched up a few hits with actor-turned-filmmaker Rakesh Roshan such as Karan Arjun (1995) and Koyla (1997). But even as he was trying to redeem himself as a poet, Indeevar passed away on February 27, 1999, leaving behind his words :
Song from Malhar 1951