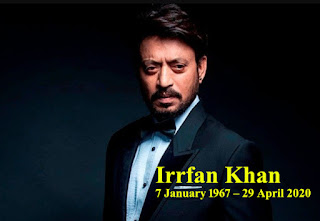 Starting his film career with a small one and a half minute role as a letter writer in the 1988 film Salaam Bombay, he emerged as the most intense actor of Bollywood. It took him 13 years to get recognition in films with the British film The Warrior (2001) and had his breakthrough with starring roles in the dramas Haasil (2003) and Maqbool (2004).
He won the Filmfare Award for Best Villain.in the film Haasil in 2004. His first Bollywood lead role came in 2005 with Rog. His performance was praised by critics;
In 2007, he appeared in the box office hits The Namesake and Life in a... Metro. His chemistry with Konkana Sen was one of the highlights of the latter; it also won him the Filmfare Best Supporting Actor Award.
He played a police inspector in the 2008 film Slumdog Millionaire, for which he and the cast of the movie won Screen Actors Guild Award for Outstanding Performance by a Cast in a Motion Picture.
In 2010, he worked on the third season of the HBO series In Treatment, enacting the part of Sunil, who is finding it difficult to come to terms with his wife's death and loneliness after moving to New York. He did Spiderman and Life of Pi in 2012. which became a critical and commercial success worldwide.
In the same year in 2012 his film Paan Singh Tomar released, he plated the title role for which he was given the National Film Award as Best Actor. In 2013, he starred in The Lunchbox, which won the Grand Rail d'Or at Cannes Film Festival and received a BAFTA nomination and became his highest-grossing Hindi film.
In 2015, he played the lead role in the film Piku alongside Deepika Padukone and Amitabh Bachchan. Khan co-starred in the 2015 film Jurassic World. In the same year, he also appeared in the acclaimed thriller Talvar in which his performance was praised.
In 2017, Khan appeared in two films, Hindi Medium and Qarib Qarib Singlle. The former was commercially and critically successful, while the latter was an average grosser. Khan's portrayal as Raj Batra in Hindi Medium earned him several accolades, one of which was the Filmfare Award for Best Actor.
In March 2018, he was told that he had a rare neuroendocrine tumor and spent several months in London undergoing treatment. It appeared to have recovered from cancer, he returned to India, and in 2019 started shooting his last film, “Angrezi Medium,” a sequel to his 2017 hit “Hindi Medium.” It was released last month,
He was admitted to Mumbai’s Kokilaben Dhirubhai Ambani Hospital on 28th April 2020, he died on 29th April.2020