Nimmi - Acted with the Golden Trio of Bollywood 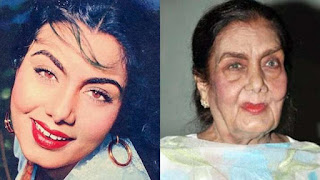 She made her debut in Raj Kapoor’s Barsaat and it was the legendary actor-director, who had given her the screen name of Nimmi. After the super success of Barsaat, she appeared in a string of hit movies in the 50s and early 60s.
She acted with the top yesteryear stars such as Dilip Kumar, Dev Anand, and Raj Kapoor. Some of her memorable movies included Sazaa(1951), Mehboob Khan’s Aan (1952), Daag (1952), Amar (1954), Uran Khatola (1955), Basant Bahar (1956) and Mere Mehboob (1963).
Her original name was Nawab Banoo, her mother was a courtesan, a singer and an actress, known as Wahidan. Her father, Abdul Hakim, worked as a military contractor in Meerut U.P.Nimmi was born on 18th Feb 1933 in Agra. Her mother died when she was only eleven years old. Nimmi was therefore sent to live in Abbottabad near Rawalpindi with her maternal grandmother. The partition of India happened in 1947, and Abbottabad fell in Pakistan. Nimmi's grandmother moved to Bombay.
The famous filmmaker Mehboob Khan who was known to her mother once invited the young Nimmi to watch the making of his current production Andaz at Central Studios where Raj Kapoor met her for the first time. Raj Kapoor was looking for the second lead actress for his film Barsaat opposite Premnath,he offered her that role. Nimmi accepted that role. She played the role of an innocent mountain shepherdess in love with a heartless city man. Barsaat, released in 1949, made movie history. It was a phenomenal critical and commercial success. Despite the presence of Nargis, Raj Kapoor, and Premnath, Nimmi had a very prominent and well-received role and was an instant hit with audiences.
In 1950, she appeared in 3 films but none of the films were successful, in 1951 her film Sazaa with Dev Anand and Deedar with Dilip Kumar released consolidated her position as the second lead role actress.
Besides Nargis with whom she co-starred in Barsaat and Deedar, Nimmi also appeared alongside many notable leading ladies including Madhubala (Amar), Suraiya (Shama), Geeta Bali (Usha Kiran), and Meena Kumari (Char Dil Char Rahen (1959). Nimmi was also a singer and sang her own songs in the film Bedardi (1951) in which she also acted. However, she never continued singing and recorded songs only for this film.
Mehboob Khan cast her opposite Dilip Kumar in Aan(1952). The film was made with an extremely large budget and was a great hit. It was one of the first Indian movies to have a worldwide release. The film had an extremely lavish London premiere which Nimmi attended.
After the great box-office success of Aan, Mehboob Khan asked her to appear in his next film Amar (1954). Nimmi played a poor, milkmaid seduced by a lawyer (Dilip Kumar). The film also starred Madhubala as Kumar's wronged fiancée. The film was not a commercial success, Nimmi's intense performance and the film were applauded by critics.
In Uran Khatola (1955), her last of five films with Dilip Kumar, she starred in one of the biggest box-office successes of her career. In 1956 too she had 2 hit films. Basant Bahar opposite Bharat Bhushan and Bhai Bhai opposite Ashok Kumar and Kishor Kumar. She received the critic's award for best actress for her role in Bhai Bhai
In the late 1950s, Nimmi worked with renowned directors Chetan Anand (Anjali ), K. A. Abbas (Char Dil Char Rahen) and Vijay Bhatt (Angulimala). Prepared to take risks, Nimmi took on controversial characterizations, such as the prostitute of Char Dil Char Raahen (1959). It was during this phase that Nimmi became very selective as she strove for better quality projects and roles.
She married in 1960 and decided to quit films but at this time K Asif signed her in Love & God even before completing his magnum opus Mughal-e-Azam.The film was shelved altogether when the director K. Asif died.It was later released on 6 June 1986 by that time Nimmi was retired for over 2 decades.
Nimmi died on 25th March 2020 in Bombay  She was 87 years old and had been in and out of the hospital for quite some time.

Posted by /bolywoodfiles.blogspot.com at 12:55:00 No comments: