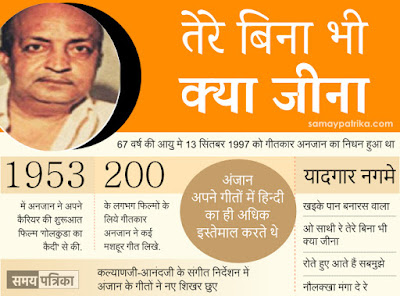 Remember the song Khaike Paan Banaraswala and Rote Hue Aate Hain Sab and many more such songs were written by Anjaan.His real name was Lalji Pandey .He was born on  October 28, 1930 and was a native of Varanasi. 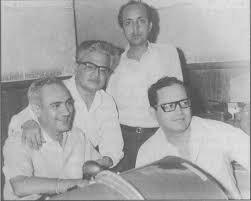 He debuted in 1953 in the movie "Prisoner Of Golconda" with the songs "Lehar Yeh Dole Koyal Bole" and "Shaheedon Amar Hai Tumhari Kahani".He was first noticed for his work with the Raaj Kumar film Godaan, based on the Premchand classic, with music by Ravi Shankar. This film got him a few good assignments in the mid - 60’s with big composers like O. P. Nayyar ("Aap Ke Haseen Rukh") in Guru Dutt’s Baharen Phir Bhi Aayengi and G. P. Sippy's Bandhan, which established him commercially with "Bina Badraa Ke Bijuriya Kaise Barse". This also saw the forging with fellow lyricist Indeevar and composers Kalyanji-Anandji.
In the 60’s, Anjaan also wrote several non - films albums composed by Shyam Sagar and sung by Mohammad Rafi, Manna Dey and Suman Kalyanpur. Rafi’s song "Main Kab Gaata" was a big hit then.

He emerged as a very prolific writer who amalgamated a lot of his commercial songs with lyricism and poetry. He was at his best in the Amitabh Bachchan films of Kalyanji Anandji, beginning with Do Anjaane ("Luk Chhip Luk Chhip Jao Na") in 1976.
Followed Hera Pheri ("Barson Purana Yeh Yaarana"), Khoon Pasina ("Title Song" and "Bani Rahe Jodi Raja Rani Ki"), Muqaddar Ka Sikandar ("Rote Hue Aate Hain Sab", "O Saathi Re", "Pyar Zindagi Hai", "Dil To Hai Dil"), Don with his biggest hit of the career "Khaike Paan Banaras Wala", ("Ee Hai Bambai Nagariya", "Jiska Mujhe Tha Intezaar"), Lawaaris ("Jiska Koi Nahin", "Kab Ke Bichhde")
Being a native of varanasi he had great love and attachment to Ganga.There were lot of songs written by him on Ganga such as "Maano To Main Ganga Maa Hoon Maano To Behta Paani" and "Ganga Mein Dooba" fromApneRang Hazar.
His health suffered a major setback in the early 90’s, though he delivered hits with Zindagi Ek Juaa, Dalaal, Ghayal and the 1990 chartbuster "Gori Hain Kalaiyan" (Aaj Ka Arjun) and his last hit Shola Aur Shabnam (1992). His other films in the 90’s included Vishnu Devaa, Parakrami, Insaniyat, Police Aur Mujrim, First Love Letter, Aandhiyaan, Phool Bane Angaarey and others.A few months before his death on 13 September 1997, his only book of poems, Ganga Tath Ka Banjara (A Gypsy from the Shores of the Ganges) was released at the hands of Amitabh Bachchan. His son Sameer is also a very successful Lyricist.

Posted by /bolywoodfiles.blogspot.com at 15:50:00 No comments: