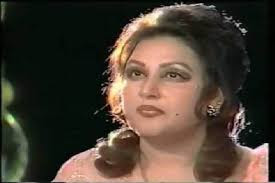 Remembering Noor Jehan today on her 92nd Birth Anniversary in my this Blog I bring some memorable moments of her life. She was renowned as one of the greatest and most influential singers of all time especially throughout South Asia and was given the honorific title of Malika-e-Tarannum (the queen of melody) in Pakistan. 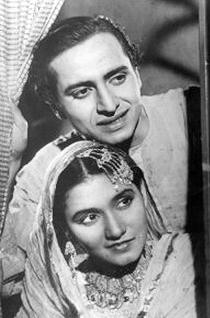 Noor Jehan was first cast as a heroine in Khandan (1942) opposite Pran as the hero.The songs of Khandan (1942) compsed by Ghulam Haider became instant hits and established her as the leading singer of films in India. Its success saw her immigrating to Bombay where she shared melodies with the singing star Shanta Apte in Duhai (1943). After that she gave 3 hits in a row.She became the darling of the masses. 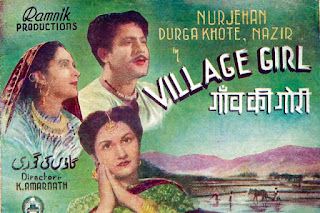 The year 1945 was a turning point for Noor Jehan. The year brought Noor Jehan her first superhit in Bombay, Zeenat (1945). It was her inimitable rendition of "Bulbulo Mat Ro Yahan" that gained her the title Malka-e-Tarranum, Queen of Melody. In Master Vinayak's Badi Maa (1945) she played lead with "Baby Lata Mangeshkar" and "Baby Asha Mangeshkar" in supporting roles.
In 1946 Noor Jehan acted in the enduring classic Anmol Ghadi (1946) The superhit songs like 'Awaz De Kahan Hai', 'Jawan Hai Mohabbat', 'Mere Bachpan Ke Saathi', 'Aaja Meri Barbad Mohabbat' and 'Kya Mil Gaya Bhagwan' composed by Naushad to make her the undisputed queen of films. 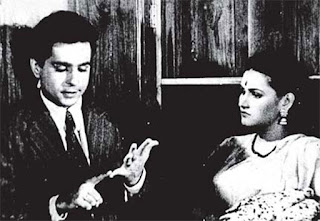 In Jugnu (1947) she starred with Dilip Kumar, then a rising star. The duet 'Yahan Badla Wafa Ka Bewafai Ke Siva Kya Hai' catapulted the then struggling Mohammed Rafi, who also made a special guest appearance in the song 'Woh Apne Yaad Dilane Ko'. 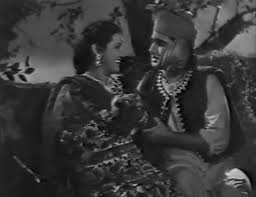 Noor Jehan's last film in India was Mirza Sahiban (1947) which starred Prithviraj Kapoor's (Father of Raj, Shashi and Shammi Kapoor, Grandfather of Rishi and Randhir Kapoor, Great-Grandfather of Karisma Kapoor) brother Trilok Kapoor. Many of the songs were hits like 'Aaja Tujhe Afsana Judaai Ka Sunaye' and the duet with G M Durrani 'Haath Seene Pe Jo Rakh Do To Qarar Aaye'.
During partition in 1947, Noor Jehan decided to migrate to Lahore in the newly created Pakistan.After the holocaust of partition as things settled down, the film industry in Pakistan picked up the pieces and made a beginning with whatever was available. Three years after settling in Pakistan, Noor Jehan starred in her first film in Pakistan, Chanwey (1951) opposite Santosh, which was also her first Punjabi film as a heroine. Shaukat Hussain and Noor Jehan directed this film together making Noor Jehan Pakistan's first lady director. The film was a runaway hit. Most of the songs rendered by Noor Jehan in the film became instant hits, not only in Pakistan but also in India, songs like 'Tere Mukhde Tey Kala Kala Til Ve' composed by Feroze Nizami. 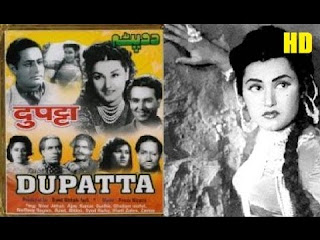 Noor Jehan's second film in Pakistan was Dupetta (1952) which turned out to be an even bigger success than Chanwey (1951). Such was the popularity of the musical score that no song based programme on Radio Pakistan, All India Radio or the newly introduced Hindi Service of Radio Ceylon, seemed complete without one or two of the film's numbers, which included songs such as 'Chandni Raatein', 'Tum Zindagi Ko Gham Ka' and 'Sanwariya Tohe Koi Pukare'. Dupetta (1952) was also actress Yasmin's first Pakistani movie. Yasmin later became Shaukat Hussain Rizvi's second wife.
Jehan bade farewell to film acting in 1963 after a career of 33 years (1930–1963),she  made 14 films in Pakistan, ten in Urdu and four in Punjabi as a film actress.
After quitting acting she took up playback singing. She made her debut exclusively as a playback singer in 1960 with the film Salma. Her first initial playback singing for a Pakistani film was for the 1951 film Chann Wey, for which she was the film director herself. She received many awards, including the Pride of Performance in 1965 by the Pakistani Government. She sang a large number of duets with Ahmed Rushdi, Mehdi Hassan, Masood Rana, Nusrat Fateh Ali Khan and Mujeeb Aalam.
Jehan suffered from chest pains in 1986 on a tour of North America and was diagnosed with angina pectoris after which she underwent bypass surgery. In 2000, Jehan was hospitalised in Karachi and suffered a heart attack. On 23 December 2000 She died as a result of heart failure. Her funeral took place at Jamia Masjid Sultan, Karachi

Posted by /bolywoodfiles.blogspot.com at 12:22:00 No comments: