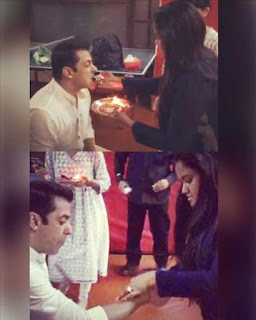 Celebrating a filmi Rakhi provides much entertainment to the participants as well as the observers. This is a unique way of expressing your love for your sibling on this very auspicious occasion.There were and are many heroines who do not have their brothers so they have made Rakhi Brothers for celeberate this festival

Actress Nimmi used to tie Rakhi to Raj Kapoor,she was Mohboli behen of Raj Kapoor,Katrina Kaif ties Rakhi to Arjun Kapoor,similarly Deepika Padukone ties Rakhi on the wrists of her bodyguard, Jalal, and made him her ‘Rakhi brother’.Aishwarya Rai Bachchan ties on the hand of Sonu Sood.Both were in the role of brother sister in Jodha Akbar.
Celebrities are usually seen celebrating Rakhi in the most adorable way! Be it , Amir Khan, Hrithik Roshan or Priyanka Chopra, everyone wishes their siblings and fans on the day of the festivity.Amitabh bachchan is a regular wisher on Twitter on this Ocasion . Celebrities are seen posting pictures of their childhood or recent ones on Instagram with their siblings.Here are some of these Pics 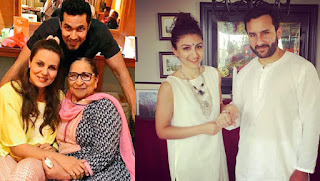 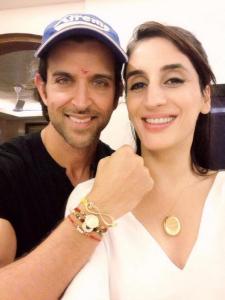 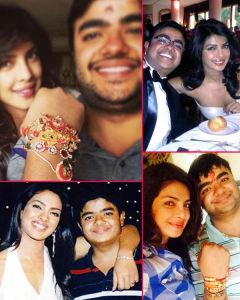 Posted by /bolywoodfiles.blogspot.com at 13:08:00 No comments: Johnny Walker (11 Nov 1920 – 29 July 2003)
He was born as Badruddin Jamaluddin Kazi in Indore,the son of a mill worker. Looking after his 15-member family was tough; five of the family died young. Johnny Walker tried his hand at almost everything, including working in the Bombay Electric Supply Transport buses as a conductor. He was posted at the Dadar bus depot but worked on several routes.

Comedians like Noor Mohammad and Charlie were his idols. Johnnysaab had always wanted to be a comedian; he believed it was his God-given duty to make people laugh.
He did his first bit role in the early 1950s and had enacted similar snippets in about 20 films but the real break was given by Guru Dutt in Baazi(1951),his new screen name Johnny Walker was given by Guru Dutt.Thereafter he was doing all the films of Guru Dutt.Films like Taxi Driver(1954) CID,Pyaasa,Madhumati,Naya Daur and Mere Mehboob made him a star.He was sought by the best banners and the best directors and was equal to the task of acting with the best of the stars.
He was offered many films(around 12) as a hero such as JOHNNY WALKER ,Mr Cartoon, These, of course, had comic themes but were embellished with wonderful music and did well at the box office. 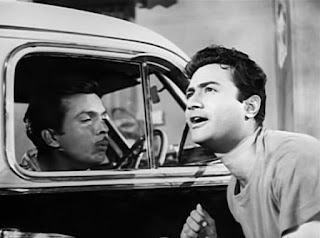 His Golden Period was 50s and 60s when he gave memorable and great performances.
He was a natural comedian, his comedy was never crude or vulgar. But, 1970 onwards, comedy began to change. Some of the comedians indulged in lewd gestures and relied on double-entendre.Johnny Walker never tried that type of comedy,In an interview he said that though he acted more than 300 films and the Censor Board never cut even one line of his character. 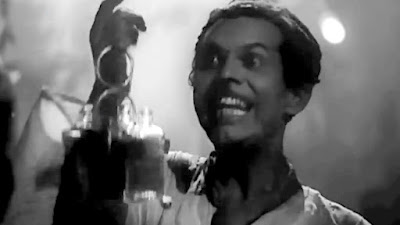 He was the comedian for whom famous music directors like S D Burman and O P Nayyar tuned some of their most memorable hits. Remember Tael maalish, champee or Yeh hain Bombay meri jaan? His drawing power at the box office was such that Distributors insisted the Producers and Directors to have atleast one song to be done with him.His song sequences in Doordarshan'sChitrahaar or cable television are highly appreciated.

Posted by /bolywoodfiles.blogspot.com at 10:30:00 No comments: 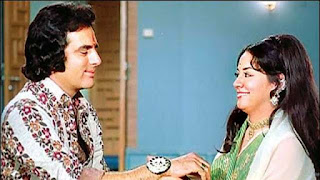 There are songs for every occasion in Bollywood.Rakhi is no exception.Rakhi is a symbol of relationship that celebrates the bond of affection.Sisters tie Rakhi on their brother's wrist and pray for his well being and brothers promise to to take care of them.
The first song for this occasion is from Chhoti Behan

Here is that song. It is sung by Asha Bhonsle and it is lip synced by Vyjyanti Mala who is shown tying rakhi on the wrist of Ashok Kumar. Naya Kanoon” (1965) was the movie with a different story line.

This brother-sister song was a very popular song during its time. This song gets played in the movie when the brother and sister are young and subsequently the song gets sung again by the grown up brother and sister The sister is not tying Rakhi here but the centements are there

This song is from “Resham ki dori “(1974). It is sung by Suman Kalyanpur, and what a superbly sung song it is ! The lyrics are by Indeewar. Shankar Jaikishan composed the music.

Posted by /bolywoodfiles.blogspot.com at 08:57:00 No comments: