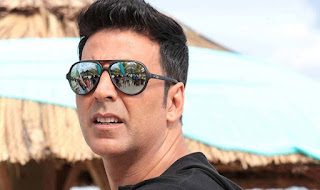 Starting his career in Hindi Films as a background dancer,Akshay Kumar is Today a Leading Actor of Bollywood.He was born on 9th September 1967 at Amritsar  to Hari Om Bhatia and Aruna Bhatia.. He lived and grew up in Delhi's Chandni Chowk and later he moved to Mumbai where he lived in Koliwada,

Song from Deedar 1992
He first appeared in the uncredited role of a martial arts instructor in the 1987 Mahesh Bhatt-directed and Kumar Gaurav starrer, Aaj.The role was insignificant so he went unnoticed.He then did some modelling assignments later on got his first break in movies as a hero in  a film Deedar (1992).Before this his 2nd signed movie Saugandh (1991) got released.He came to limelight in 1992 from the  Abbas Mustan-directed suspense thriller, Khiladi,

1994 was a very important year for Akshay,this year  he appeared in 11 feature films.Out of these 11 movies his 2 films  Main Khiladi Tu Anari and Rajiv Rai-directed Mohra which were among the highest-grossing films of the year.Later that year, he starred in Yash Chopra-produced romance, Yeh Dillagi opposite Kajol. His role in the film earned Kumar his first nomination for Best Actor at the Filmfare Awards

The following year, Kumar played dual role in Umesh Mehra-directed action thriller, Sabse Bada Khiladi, which was a commercial success.After that he became the Khiladi of bollywood.His 4th film of Khiladi series , Khiladiyon Ka Khiladi opposite Rekha and Raveena Tandon. was again a commercial success. In 1999, Kumar played opposite Twinkle Khanna in International Khiladi. The film turned out to be an average grosser at the box office.He later married to Twinkle Khanna in 2001
In 2000, Kumar starred in the Priyadarshan-directed comedy Hera Pheri alongside Paresh Rawal and Sunil Shetty. The film which was a remake of Malayalam film Ramji Rao Speaking,became a commercial success and proved to be a turning point in Kumar's career.He also starred in the Dharmesh Darshan-directed romantic dramaDhadkan later that same year. The film performed moderately at the box office but Kumar was praised for his acting.

Dil Ne Yeh Kaha Hai Dil Se
After 1994 the year 2007 proved to be Akshay Kumar's most successful year during his career in the industry, and as described by box office analysts, "probably the best ever recorded by an actor, with four outright hits and no flops.His first release, Vipul Amrutlal Shah-directed Namastey London, was critically and commercially successful,His next two releases, Sajid Khan-directed Heyy Babyy and Priyadarshan's Bhool Bhulaiyaa, were box office successes as well.His last release of the year, the Anees Bazmee-directed Welcome, did extremely well at the box office, receiving a blockbuster status and simultaneously becoming his fifth successive hit

Song from Rowdy Rathore
Later on he starred in Housefull series all the three movies of this series were hit.
2012 was also an year which gave Akshay Kumar two massive hits  Rowdy Rathore and Houseful 2.and 2 hits Oh My God and Khiladi 786.
Every year he is giving 2/3 hit movies This year(september 2016) till now he has given 2 hits Airlift and Rustam.He is now become the most successful Actor with Salman khan.