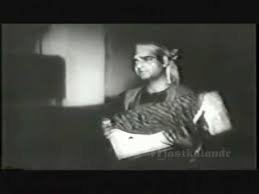 We all have heard this famous song of K L Sehgal.After close to nearly 80 years of it being released (for the 1938 movie, Street Singer), this still remains a favorite of the discerning listener of vintage Indian film music. This is being one of my favorites of K l Sehgal songs.
A thought came in my mind why not write a blog on this Immortal song.Very few  would know that this Bhairavi thumri, was composed by Wajid Ali Shah,when he was expelled to Calcutta, he wrote the parting song Babul Mora,picturing the mind of a heart broken man. He expressed his pain of parting in the lyrics of ‘Babul mora naihar chhuto jaye’, It has been one of the favorite thumris of many a singers over generations—from Ustad Faiyaz Khan—the most well-known singer of Agra Gharana and arguably one of the best voices on record—to Alisha Chinoy.
The most famous version of Wajid Ali Khan’s Babul Mora was sung by Kundan Lal Saigal in the movie Street Singer in 1938. The music was composed by Rai Chand Boral, who is considered as a father figure among  cine-music composers.
The list of luminaries who sang ‘Babul Mora’ includes-  Bhim Sen Joshi, Kesarbai Kerkar, Siddheshwari Devi, Rasoolan Bai, Khadim  Hussain Khan, Mushatq Hussain Khan, Girija Devi, Kishori Amonkar, Jagmohan, Padma Talwalkar, Shanti Vaidyanathan Sharma, Mahender Chopra (son-in-law of K.L.Saigal) and none other than Ghazal queen Begum Akhtar.
Thumri arose in popularity during the 19th century in the Lucknow court of Nawab Wajid Ali Shah. At that time it used to be a sung by courtesans accompanied by dance. It is said that Thumri is a short piece of semi-classical rendition usually sung at the conclusion of a classical music concert.
The Saigal version is set in Raag Bhairavi – Bhairavi had traditionally been performed in the early morning hours.  However, due to the fact that performances lasted all night, it has now become common to consider Bhairavi to be the finale.
To my readers I have taken the videos of various version of this immortal song sung by the great singers of their time In fact the latest version with modern instruments by Rajesh Panwar at New Jersey in 2015.

Posted by /bolywoodfiles.blogspot.com at 14:38:00 No comments: Links to this post