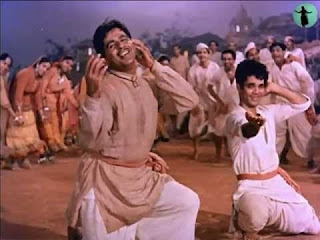 In 1934 Hindi film songs began to be recorded on gramophones and later, played on radio channels, These songs can be classified in three catagories Solo,Duet or Chorus.A chorus song is basically a song sung by more than 2 singers, A Full Chorus is sung by the main singers along with many singers.The first Chorus was in the 1936 movie  ‘Kaarwaan e Hayaat’.It was sung by KL Saigal, Pahadi Sanyal and Molina.The first Full Chorus was introduced by Anil Biswas in 1943 film Kismet,the song was Aaj Himalay Ki Choti Se – Door Hato Ai Duniya Walo,After the success of this song Chorus songs became the part of Bollywood films.
There are many Chorus songs which became popular All of them can not included in this Blog,I will try to include few most popular songs in 2 parts.
Part-1

This is primarily the first chorus song, within which we can surmise certain individual voices (of KL Saigal, Pahadi Sanyal and Molina) as they sing some individual lines, while the chorus of other singers continues.The music is credited to Mihir Bhattacharjee.
Song from ‘Kaarwaan e Hayaat 1936

Here is the  song from “Prem Nagar”(1940). This song is a group song with identifiable lead voice of Bimla Rani and Ramanand, D N Madhok is the lyricist. Music is composed by Naushad, who was making his debut as a music director with this song.
Song-Mat Bolo Bahar Ki Batiyan (Prem Nagar)(1940) Lyrics-D N Madhok, MD-Naushad

Posted by /bolywoodfiles.blogspot.com at 09:48:00 No comments: