LATA MANGESHKAR-The Voice for every major leading lady of Bollywood 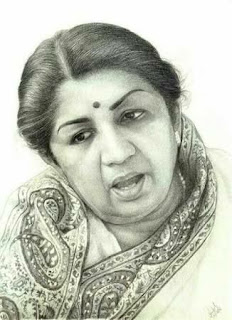 As a teenager she struggled to help support her family and to establish herself as a playback singer in the Hindi film industry of the 1940s, at a time when the profession was dominated by such divas as Shamshad Begum and Noor Jehan.
She represented every generation of Hindi cinema from Nargis and Waheeda Rehman to Madhuri Dixit and Kajol.
Mangeshkar was trained from age five by her father Dinanath Mangeshkar, a disciple of the Gwaliorgharana (a community of performers who share a distinctive musical style), and she was also tutored by maestros such as Aman Ali Khan Sahib and Amanat Khan.
Her first song as a playback singer in hindi films was in 1947 - Aapki Sewa Mein (paa laagu kar jori...)but this song did not give lata recognition as a singer,her first major break was in 1948-Majboor (Dil Mera Toda) given by Music Composer Ghulam Haider.After she recorded the hit “Uthaye ja unke sitam” in Andaz (1949), her destiny was sealed,the year 1949 was the turning point of a great career.The year saw the rise of Lata Mangeshkar The song Aayega Aane Wala from Mahal and the songs of Barsat came the same year.After that she never looked back.She became the voice of all the Major Heroines.In an interview when asked who according to you  enacted your songs really well onscreen?.She said that Actresses like Sadhana, Meena Kumari, Nargis, Madhubala and Kajol, took the effort to understand the song and act accordingly. Jaya Bachchan observed me well and got my mannerisms right - starting with how I stand, how I sing and how I drape my sari. In Abhimaan (1973), she even chose to wear white saris like me. It was commendable.
From the 1940s to the 1970s, Mangeshkar sang duets with Asha Bhosle, Suraiya, Usha Mangeshkar, Mohammed Rafi, Kishore Kumar, Mukesh, Manna Dey, Hemant Kumar, and Mahendra Kapoor. In 1964, she sang "Chanda Re Hoga" with P.B. Sreenivas from Main Bhi Ladki Hoon. she continued to sing with Shabbir Kumar, Shailendra Singh, Nitin Mukesh (Mukesh's son), Manhar Udhas, Amit Kumar (Kishore Kumar's son), Mohammed Aziz, Vinod Rathod, and S.P. Balasubrahmanyam.Udit Narayan,Kumar Sanu and Sonu Nigam
In the 2000s, Mangeshkar's duets were mainly with Udit Narayan and Sonu Nigam. 2005-06 were the years of her last well-known songs: "Kaise Piya Se" from Bewafa and "Shayad Yehi To Pyaar Hai" from Lucky: No Time For Love, with Adnan Sami and " Lukka Chhupi" in Rang De Basanti (2006 film) with A.R.Rahman. She sang "Ek Tu Hi Bharosa" from Pukar. Other notable songs of this decade were from Veer-Zaara, sung with Udit Narayan, Sonu Nigam, Jagjit Singh, Roop Kumar Rathod, and Gurdas Mann. One of her latest songs was "Jeena Hai Kya" from Dunno Y2 (2014).
Lata Mangeshkar has won several awards and honours, including Bharat Ratna (India's Highest Civilian Award), Padma Bhushan (1969),Padma Vibhushan (1999), Dadasaheb Phalke Award (1989)
SONGS VIDEOS  FOR SADHNA 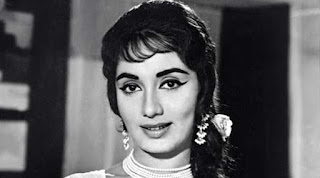 On the 76th Birth Anniversary Of Sadhana,the heart-throb of the nation in 1960s,we look back at the craze of this great actress.She belonged to an era when Hindi cinema was transitioning from the slow ’50s  to the more playful, chaotic ’60s.Starting her career as heroine in Bollywood through 1960's romantic film Love in Simla. Her fringe haircut became popular during the 1960s and came to be known as "Sadhana cut".Sadhana is also credited for bringing into fashion tight chudidar-kurta. She went with this concept of gracefully changing the traditional loose salwar kameez to her director Yash Chopra for 1965's film Waqt.Initially Yash Chopra was not agreed for this change but Sadhana with the help of her fashion designer Bhanu Athaiya showed him a sample, which he liked. The trend lasted well in the 1970s and can be seen to be adopted by many actresses.
After Love In Shimla her 2nd film Parakh was released.in this film she played the simple village girl,she had to stick her fringe back in order to match the simple village girl she played here.Even without that she looked beautiful.Then came Hum Dono in 1962 The film stars Dev Anand in a double role, and also has Nanda his co-heroine.The film was a big hit that established Sadhana as a leading actress.In the same year Ek Musafir Ek Hasina and Asli Naqli released, both were successful.at the Box Office.In 1963, Sadhana played her first role in a technicolour film Mere Mehboob directed by H. S. Rawail. The film was the "blockbuster" of 1963.She now became the most sought after heroine of Bollywood.
In 1964, she played a double role in the first of the suspense-thriller trilogy, Woh Kaun Thi? This white-sari-clad performance opposite Manoj Kumar earned her first Filmfare nomination as Best Actress.The film was a box office "Hit". Raj Khosla cast her in two more successful mystery films, Mera Saaya (1966) and Anita (1967) thus making her famous as the "Mystery girl". Mera Saaya, a box office "Super Hit".
Sadhana had  health issues due to her thyroid, which she got treated in Boston.She was doing limited films,earlier also she did 2 or 3 films in a year.Her most of the films fared well in Box Office and few of them were Mega Hits such as Mere Mehboob,Waqt,Arzoo and Ek Phool Do Maali.
Raj Khosla was the director who worked with her in many movies.three of their films Woh Kaun Thi, Mera Saaya and Anita presented her a beautiful woman who haunts the hero,who does with her beauty. Sadhana had a unique quality that she blooms and blossoms,she sparkled in her songs.Think of brilliant smile that opens in Tujhe Jeevan Ki Dor Se Baandh Liya Hai or Tera Mera Pyar Amar from Asli Naqli,the softness of Jahan Mein Aisa of Hum Dono or the magnetic pull of the call Lag Jaa Gale of Woh Kaun Thi.
Sadhana died on 25 December 2015 in Hinduja Hospital, Mumbai
Here are 10 Famous Songs Picturised on Sadhana 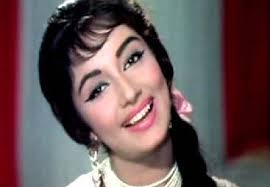 Sadhana(2 September 1941[1] – 25 December 2015), was an Indian actress who was one of the top actresses in the 1960s and the early-1970s, a period regarded as Bollywood's "Golden Era".She was famous for her Sadhna Cut Hair.The style that was copied by girls in India and is still known by the same name.
Sadhana aspired to be an actress since childhood. Her father helped her enter films. In 1955 she played a chorus girl in the song "Mur Mur Ke Na Dekh Mur Mur Ke" in Raj Kapoor's Shree 420 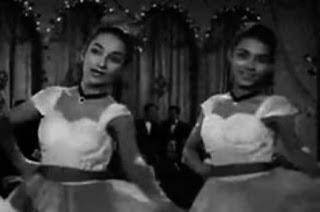 She made her debute in bollywood with Love in Shimla opposite Joy Mukharjee,R K Nayyar who later on married her was the director of this film. The film was declared a hit at the box office and was listed in the top 10 films of 1960.Before this she appeared in a Sindhi Film.

Song from Love In Shimla
Alongside Love in Simla, Sadhana was signed by acclaimed director Bimal Roy for his satirical film on Indian democracy, Parakh. She portrayed a simple village girl in this multi-award-winning film.

Song from Parakh
1961's other hit Hum Dono, she played the love interest of Dev Anand. The duet "Abhi Na Jaao Chhodkar" from the film Hum Dono is regarded as "the most romantic song".After this film she became the darling of Indian Cine goers.

In 1962, she was again paired with Dev Anand in Asli-Naqli by director Hrishikesh Mukherjee. The same year saw director-screenwriter Raj Khosla cast her opposite Joy in Ek Musafir Ek Hasina. Khosla would again work with Sadhana to make a suspense thriller trilogy.

Song from Mere Mehboob
In 1963, Sadhana played her first role in a technicolour film Mere Mehboob directed by H. S. Rawail. The film was the "blockbuster" of 1963 and ranked in the top 5 films of the 1960s.

Songs from Woh Kaun Thi
In 1964, she played a double role in the first of the suspense-thriller trilogy, Woh Kaun Thi? ,Directed by Raj Khosla,This white-sari-clad performance opposite Manoj Kumar earned her first Filmfare nomination as Best Actress.Later on Raj Khosla  cast her in two more successful mystery films, Mera Saaya (1966) and Anita(1967) thus making her famous as the "Mystery girl".

Song from Mera Saaya
Mera Saaya, a box office "Super Hit" courtroom drama film again saw her playing a double role, now opposite Sunil Dutt. The song "Jhumka Gira Re" sung by Asha Bhosle and composed by Madan Mohan saw Sadhana perform dance steps choreographed by Saroj Khan. Khan was then an assistant to dance director B. Sohanlal. The song became so popular that excited audience in cinema halls used to throw coins at the screen, and is one of the most requested songs on radio.

Song from Mera Saaya
In 1965 Yash Chopra's Waqt released, She stood out in Bollywood’s first ever ensemble cast by bringing along the fashion of tight churidar-kurtas.The trend lasted well in the 1970s and can be seen to be adopted by many actresses The film proved to be 1965's "blockbuster hit",Sadhana got her second Filmfare nomination as Best Actress for the role of Meena

Song from Aarzoo 1965
1965 was a very good year for Sadhna, this year another Blockbuster film Aarzoo was released.She was once again paired with Rajendra Kumar.Her other notable works in the 1960s include performances in Rajkumar (1964), Dulha Dulhan (1964), Gaban (1966) and Budtameez (1966)
After 1965 another golden year 1969 came in her life .She gave 2 Super Hits that year,Intaquam and Ek Phool Do Mali ,In Intaquam she played the role of a woman who revengefully allures the son of her own boss who cheated her to be put behind the bars for a crime she did not commit

Song from Intequam
In 1974 her directorial venture Geeta Mera Naam released. Produced by her husband, the film had herself playing the lead actress along with Sunil Dutt and Feroz Khan.This was her last hit movie after that she did very few movies.
Despite the fact that many of Sadhna's films fared very well at the box office, she appeared in very few movies (nearly 50).She was also not been awarded the best Heroine Award.For her contribution to film, she was awarded the Lifetime Achievement Award by the IIFA in 2002
Sadhana died on 25 December 2015 in Hinduja Hospital, Mumbai after being hospitalised with high fever. Although the illness she briefly suffered from was officially undisclosed, a family friend confirmed Sadhana had cancer.

It would only be fair if we remember her for her contribution to Hindi cinema, her devotion to films and the woman she was. Here are some beautiful track which will  be remembered  forever.

Song from Ek Phool Do Maali

Posted by /bolywoodfiles.blogspot.com at 08:25:00 No comments: