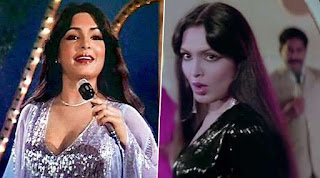 Parveen Babi (4 April 1949 – 20 January 2005), like Zeenat Aman, redefined the image of the Indian film heroine. She started her career as a model and entered into the films with the 1973 film "Charitra" Her first major hit was Majboor (1974), opposite Amitabh Bachchan. Her pairing with Amitabh Bachchan was very successful, she did 8 films with him. Her more memorable roles include "Anita" in Deewaar (1975), "Jenny" in Amar Akbar Anthony (1977), and "Sunita" in Shaan (1980).
One point of time she was the highest-paid actress. Because of her western looks, she was given roles which were glamorous and represented standards of a film star quality and established her status as one of the "Top Heroines of Bollywood" or the "Commercially successful Heroine"
In her acting career, which spanned almost ten years, she has acted in more than fifty films, of which ten were considered to be best. These films were also blockbusters of those times. Her co-stars include Amitabh Bachchan, Shashi Kapoor, Feroz Khan, Dharmendra, Rajesh Khanna, Vinod Khanna and Rishi Kapoor who were all leading stars of the 1970s and 1980s. Some of the songs picturized on her become hugely popular, and this includes "Jawaani Jaaneman" and "Raat Baaqi Baat Baaqi" in Namak Halaal, "Pyaar Karne Waale" in Shaan and "Maara Thumka" in Kranti,
At the peak of her career, she left the film industry for a spiritual journey with U. G. Krishnamurti She returned to India after a gap of 6 years.It is said that she was a patient of  paranoid schizophrenia, a mental illness,
In an interview in 1998, she said: "I was born a Muslim and later, I converted to Christianity. But I have never done things I didn't believe. Even when I was a Muslim, I didn't understand why it made me a more spiritual entity, She converted to Christianity during the late 1990s and also started eating pork.
In the 90s, she took up keen interests in music, piano, painting, architecture, literature, writing, cultural and archaeological study, politics, photography, sculpture and human rights issues.
She was found dead on 22 January 2005 after her residential society secretary alerted the police that she had not collected milk and newspapers from her doorstep for three days.

Posted by /bolywoodfiles.blogspot.com at 14:16:00 No comments: