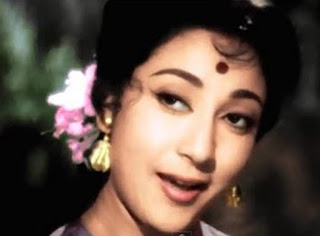 Mala Sinha (Born on 11th Nov 1936) was the highest-paid actress from 1958-65 with Vyjanthimala, Recall the song 'Aapki nazaron ne samjha, pyaar ke kaabil mujhe..'from Anpadh which was Lip-synced by Mala Sinha became so popular, made her the darling of millions of people of film lovers. She became one of the superstars who ruled the celluloid from the era of the 50s to 70s, the actress never defied from taking up roles which her contemporaries feared to touch back then.
As per Mala Sinha Pyaasa 1957 was the turning point of her career. After Pyaasa, her major successe was Phir Subah Hogi (1958) She then appeared in Dhool Ka Phool 1959 where she played the role of an unwed mother, which made her a star.
It was Geeta Bali who introduced her to Kidar Sharma who cast her as a heroine in his Rangeen Ratein. Her first released Hindi film was Badshah opposite, Pradeep Kumar, She was the heroine of many successful films from 1958 to the early '60s such as Parvarish (1958), Ujala, Main Nashe Main Hoon, Duniya Na Mane, Love Marriage (1959), Bewaqoof (1960), Maya (1961), Hariyali Aur Rasta, Dil Tera Deewana(1962), Anpadh and Bombay Ka Chor (1962).
She was regularly paired with Pradeep Kumar but later she paired with Biswajeet.  She worked with many newcomers of her era including Manoj Kumar, Dharmendra, Rajesh Khanna, Sunil Dutt, Sanjay Khan, Jeetendra and Amitabh Bachchan.Her character's power was as much as the heroes and most of the time her roles were more powerful than the hero. In most of her films from the 1960s,
Her pairings opposite Raaj Kumar, Rajendra Kumar, Biswajit and Manoj Kumar in woman-oriented films were appreciated by audiences, with her work opposite Biswajit being the most popular. With Raaj Kumar, she gave box office hits like Phool Bane Angaare, Maryada and Karmayogi and opposite Manoj Kumar, gave commercial successes like Hariyali Aur Rasta, Apne Huye Paraye and Himalaya Ki God Mein. The hits with Rajendra Kumar were  Dhool Ka Phool, Devar Bhabhi, Patang, Geet and Lalkar.
With Biswajit, her popular movies include Aasra, Night in London, Do Kaliyaan, Tamanna, Nai Roshni and critically acclaimed films Pyar Ka Sapna, Paisa Ya Pyaar, Jaal and Phir Kab Milogi. She did ten films with Biswajit.
In 1966, Mala Sinha went to Nepal to act in a Nepali film called Maitighar when the Nepali film industry was still in its infancy. This was the only Nepali film she did in her career. The hero was an estate owner called Chidambar Prasad Lohani with whom she married in 1966.
Some of her best-remembered performances were in  Bahurani (1963), Gumrah, Gehra Daag, Apne Huye Paraye, Nayi Roshni and Jahan Ara.

Posted by /bolywoodfiles.blogspot.com at 11:55:00 No comments: