The Evolution of Bollywood Dance 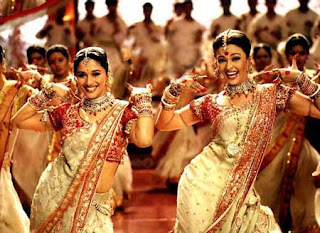 Songs and Dance are integral part of Indian films.No Bollywood film would be complete without many songs and dances.The style of dancing in earlier Bollywood films was based on Indian Classical Dance or Folk Dances from various parts of India. These dances included the classical art forms of Kathak and Bharata Natyam. But today, Bollywood has developed its own corpus of material.Bollywood Style of Dancing is now a craze in UK,USA and Europe.
Earlier films from south India tended to show a lot of influence from Bharat Natyam and Kuchipudi while Hindi films tended to show strong influences of Kathak or the "mujara" dances that were associated with the tawaifs.
The very first movie fully Choreographed was Kalpana (1948) produced and directed by the renowned dancer Uday Shankar. In the same year another film released was S S Vasan's Chanrakanta choreographed by Tarun Chopra,the disciple of Uday Shankar ji.With the success of both these films the era of dance began in Hindi Cinema.Before that a film Roti (1942) became hit because of Sitara Devi's Dance.

There were some great dancers in that era.  Indian Cinema was blessed with great dancers like Geetanjali, Sandhya, Vyajayantimala,Padmini,Ragini & Mahipal who with their outstanding energy and performance mesmerized the audiences and took dance to the next level. In 1951 Raj Kapoor gave the industry a lavish song-and-dance dream sequence.Filmed evocatively in black and white, ‘showman’ Kapoor gets his muse Nargis to ‘welcome her wanderer home’, on the backdrop of an over-the-top set featuring a grand stairway, lots of mist, a giant dancing Shiva and a crowd of background female dancers. Nargis rose to the challenge and proved her versatility with her dancing feet.

In the late 50's & 60's group dances began to evolve in Bollywood films & choreographers started managing larger groups of dancers, with influences from folk dances. One may also find songs about holidays, (e.g., Holi), Mother India, the moon, or other topics; but these are far less common.Another style of dancing evolved in 60s was heroes and heroines were singing romantic songs running and dancing around trees.Some of these moves were really rather hard to class as dancing.  The spastic deliveries of songs by Shammi Kapoor came to mind.  Still, from these random spastic jerks and jumping around, identifiable moves began to develop. In that period V Shantaram made few great Song & Dance Movies like Jhanak Jhanak Payal Baje,Dr Vidya and Navrang.

Dance from Dr Vidya
In the 50s a new style of dance was introduced by Bhagwan dada which became very popular.A film Albela in 1951 had many songs and dance in a new style.These steps are still liked by the audience.Amitabh Bachchan copied those steps in many of hit films in 70s and 80s

The new entry in Bollywood dance was cabarets and western dances.The cabaret scene is probably the most significant artistic and commercial example of the Bollywood dance.  It may be considered to be the first truly 'Bollywood" form.

Song from Howrah Bridge 1958
Undoubtedly the reining queen of the cabaret dance was Helen.  She was born Helen Jairag Richardson, of mixed Anglo-Indian-Burmese descent.  She started dancing and acting in the 1950s, and by the 1960s was the undisputed queen of the item girls.  However by the 1970s, item numbers were going to the younger girls.
In the 80s Cabaret was replaced by Disco, which was a worldwide phenomenon at the time.
By this time classical dance vanished from Hindi films only in Period films Mujra were shown.With the emergence of Mithun Chakraborti disco was the main attraction during that period.After that in 90s came an era which introduced Bollywood Free Style of dancing which was well represented by dancers like Govinda who developed their own signature style of dance.
Now since the inception of MTV , Bollywood dancing has been heavily influenced by Western dance styles, and incorporates elements from the West. In many cases, the musical numbers are released as separate music videos, and the soundtracks are released prior to the film, in order to further advertise the upcoming feature films. In modern Bollywood films, the musical numbers are often based on the Hip-Hop style of dance as well as other variations of Hip-Hop dance.The dance movements have become more bold & extroverted to capture the audience’s attention.

For the last few years Remo D'souza the famous Choreographer is making films based on Dances.He made India's first 3D dance movie, ABCD - AnyBody Can Dance, with contestants from season 1 and season 2 of Dance India Dance (Dharmesh Yelande, Punit Pathak, Salman Yusuff Khan, Bhavna, Prince and others),Prabhu Deva and Lauren Gottlieb. After that ABCD 2, was released in June 2015. It starred Varun Dhawan, Shraddha Kapoor, and Prabhu Deva in lead roles, with Lauren Gottlieb, Punit Pathak, Raghav Juyal, and Dharmesh Yelande in supporting roles.
The Evolution of Bollywood Dance is a process that is entirely Indian and yet cross-cultural at the same time.
Some of the Iconic Dances of Bollywood

This song changed the Indian music industry era & created a milestone platform important thing Lata Mangeshkar is the Golden voice gifted by the God....and the immortal Nagin dance by Vyajayantimala.﻿


The great Dance by Gopi Kishan and Sandhya

The best and liveliest example of Bharatanatyam on a film.

WHAT A DANCE SONG, WHAT A CHOREOGRAPHY AND OF COURSE THE MUSIC OF SALIL Da.

Song from Phagun ,1958,
One of the amazing song & dance produced ever, Sandhya performs so beautifully, one of the greatest dancer of Bollywood.She will always be remembered for her great personality and amazing looks.
Song from Navrang 1959

The milestone Dance of Hindi film industry is this song ,Lata Mangeshkar's voice and Madhubala s dance are just complimenting each other n a real justice to this song﻿

Helen is pure perfection. Every move, every gesture is on point.Helen"s thumkas, steps & insertions are nicely blended & took up the task of choreography perfectly.

Wonderful dance by Asha Parekh - so talented , Look at the great talent of this woman ' Asha Paresh ' and maneuvering of her body in the way her Guru Gopi
Krishna taught.

SERPENT DANCE BY Waheeda Rehman in GUIDE (1965).A real treat to watch

This dance is from Amrapali , a 1966 historical Hindi film directed by Lekh Tandon, starring Vyjayanthimala and Sunil Dutt as leads. Music of the film was by Shankar-Jaikishan. Vyjayanthimala is truly one wonder woman.Personality,figure,her position,style,communication
skills, her dance graceful,

Long dance sequence with minimum clipping...only Vijayanthimala can do it.﻿.5 stars to this song and dance sequence. Lata is just brilliant .Wow.﻿

A great dance compitition between 3 legends  Vyajayantimala,Helen and Shammi Kapoor

How can we miss this great song and dance by Helen in Carvan 1971,this film has many dances.
Song from Carvan 1971

With this film Disco Dancer this form of dancing became popular.This songs gives you full energy... Your body get automatically start responding to every beats

Madhuridixit is one of the greatest dancer in India and no doubt people appreciated her performance in this song.She became hit after this dance.
Song from Tejab 1988

This is the Magic of Madhuri and Saroj khan.Madhuri Dixit is unmatchable in Bollywood,she gave many song and Dance hits.

With the emergence of Govinda his style of Dancing became popular.He along with Karishma kapoor gave many Hit songs,this is one of those songs.
Hero No1 1997

With Dil to Paagal Hai Shimak Davar changed the way dance was perceived in Indian films,he is the first to bring contemporary jazz and western forms of dance to India. He is known as the guru of contemporary dance in India.

Today's generation can't even imagine the craze of this song when it was released.With this film emerged a new form of dancing.

Posted by /bolywoodfiles.blogspot.com at 14:50:00 No comments: