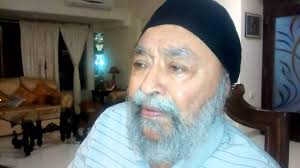 Mohinder Singh Sarna (aka S. Mohinder) was born in a small town called Sillanwali in 1925.His training in classical music was from Sikh religious musician Bhai Samund Singh.
Frequent transfers of his father kept the family on the move. Since Mohinder’s education suffered, his father enrolled him in Khalsa High School during the 1940s in the village Kairon in Amritsar.

In 1947, the rest of his family moved to East Punjab in India. The love for classical music brought S. Mohinder to Benares, the Mecca of Indian Classical Music. After some years of grooming S. Mohinder, moved to Bombay(now Mumbai), the centre of the film industry. He got the first chance as music director from Arun Kumar's SEHRA in 1948 ,he himself sang one song in that movie "Aei Dil Uda Ke Le Chal"
A very rare song by S Mohinder From SEHRA (1948)
.He sang another song which was a duet with Prem Lata in the movie Jeewan Saathi (1949),the song was" O Dear My Dear". S. Mohinder took a regular job of music director in “Filmistan Studio”, which was churning out movies like a mint producing coins. S. Mohinder composed music for “Filmistan” for half a decade. It was a great experience.
His first successful film was Nili(1950),starring Dev Anand and Suraiya, which was musical hit but a film disaster.In this movie Suraiya sang 7 songs out of 9.One popular song is being posted below(only Audio)

His noticeable Films inclue "NAATA"(1952) in which the song"Dhadka Reh Reh Ke Dil Baawra" was very popular,the song had the voice of Lata,Rafi,Shamshaad Begum and Balbir. In 1956 his another film Caarvan was released which had some good songs,Aa Ja tujhe Mohabbat Awaaz De Rahi Hai by talat mahmood and another Kis Rah Ka Rahi Hai Tu by Lata and G M Durrani
In 1967 Shirin Farihad released, The song Guzra Hua Zamana Aata Nahin Dobaara became the immortal song of S Mohinder.This movie may be remembered by its songs.

Aye Dilruba Hemant Kumar Asha Bhonsle Film Shirin Farhad (1956)Madhubala, a leading actress in the film, was so impressed with the music of “Sheereen Farhad” that, while coming home after a hectic shooting session, she herself visited the residence of S. Mohinder, to thank him for the special music he had created. This film had nine songs, all were great hits. Big playback names like Talat Mehmood, Hemant Kumar and Mohammad Rafi gave their voices to the songs.

Song from Pardesi DholaHis music for his first Punjabi film “Pardesi Dhola” was a hit. After that he mainly devoted his attention on composing music for Punjabi films only.. His music for “Chambe Di Kali” also became a hit. Inderjit Hassanpuri, a friend of S. Mohinder, made a Punjabi film “Daaj” in which S. Mohinder composed very emotional tunes. Later on during the late seventies S. Mohinder composed music for some non-film Punjabi albums too and the singers included the best in the Punjabi music business, Surinder Kaur and Asa Singh Mastana. These private albums were also instant hits.
\In 1969. Ram Maheshwari and Panna Lal Maheshwari, originally from Amritsar, decided to make a movie in Punjabi based on Sikh religious sentiments. The film was titled“Nanak Naam Jahaz Hai”. S. Mohinder got the contract to compose the music.  As we all know film “Nanak Naam Jahaz Hai” has been an all time hit Punjabi movie. Its music was also as big a success.He was given The National Award For Best Music Director 1970 for this film by Govt Of India.
S. Mohinder composed the music for most of these Sikh religious movies. “Dukh Bhanjan Tera Naam”featuring Shaminder Singh as the hero was the next film, it was also quite successful. Then came two more namely “Man Jeete Jug Jeet” and “Paapi Tare Anek”. Both were successful at the box office. All these movies were made during the decade of seventies. S. Mohinder also composed some of his most memorable music for these moviesS. Mohinder left India for the USA in 1982, when he was at the peak of his career as a music composer. The last film featuring his music was named “Maula Jatt”, with Dara Singh in the male lead role

Posted by /bolywoodfiles.blogspot.com at 15:47:00 No comments: