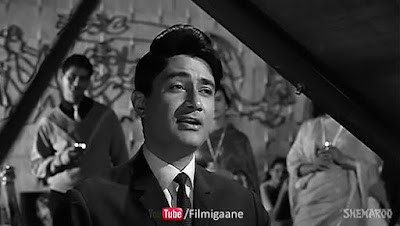 IN Bollywood Movies PIANO was an important Instrument to create a song situation specially in Golden Era of Bollywood.Most leading Actors would be seen playing Piano and singing a song.Nowadays this situation is missing in our movies.It used to be a clever ploy of the film director to introduce a song even when the situation didn't demand it.Sometimes a song starts with a piano and lateron switch to dance or some other scenes.

In my knowledge the first Piano Song was picturised as a piano song. P Jairaj is playing the piano and this song is sung by Renuka Devi. Her father V H Desai looks on and later the villain Rama Sukul too comes in and watches her sing with disapproval.The song is from “Bhaabhi” (1938).Singer-Renuka Devi, Lyrics-J S Kashyap, MD-Saraswati Devi

Here is a timeless classic  song. “Jawaan hai muhabbat haseen hai zamaanaa” is sung by Noorjehaan and it is picturised on herself. The unforgettable lyrics were written by Tanveer Naqvi and music was composed by Naushad.for the film Anmol Ghadi 1946

Andaj 1949 movie is a movie in whic 4 Piano songs were picturised,all these songs were popular i am posting here this song "Ham aaj kahin dil kho baithe" Dilip Kumar sits at the piano at night and sings this song. And Nargis arrives with her pet dog and watches Dilip Kumar sing the song, clutching her dog like a pillow.The song is sung by Mukesh. Majrooh Sultanpuri is the lyricist and Naushad composed the music.

This song is a piano song, where Dilip Kumar sits at the piano This song is from “Baabul” (1950). The song was sung by Talat Mahmood and Shamshad Begum

Here is one such song from “Anhonee” (1952). This is a song sung by Talat Mehmood and picturised on Raj Kapoor. It is a rare combination of singer and actor, but the song itself is quite well known and it is in fact a Talat Mehmood classic.

This song is sung by Lata and picturised on Nargis. This song is written by Hasrat Jaipuri and music is composed by Shankar Jaikishan.The Film ia Aawara 1951
Jabse balam ghar aaye

Here is a piano song from the movieMiss Merry 1957. It is a piano song in the sense that Gemini Ganeshan sits at the piano and he is supposed to play it, though one can not recognise the sound of piano but the music of tabla, flute and other instruments that one can hear.

Here is a romantic piano song sung by Asha Bhonsle and picturised on Nargis and Balraj Sahni.The film is Lajwanti 1958, Majrooh Sultanpuri was the lyricist and S D Burman composed the music.

Here is a Lata-Madan Mohan classic from a 1958 movie called “Jailor”. Lyricist is Rajinder Krishan and the song was picturised on Geeta Bali who sings this song on a piano.

It is a piano song. Though the picturisation does not show the piano being played again after the beginning of the song.Shailendra as the lyricist and Shankar Jaikishan as music directors have created a masterpiece which has been sung so beautifully by Lata. The film is Anari 1959

This song is from the movie Shola Aur Shabnam 1961. It is a piano song Dharmendra is playing Piano but the director has shown Dharmendra's face in dark reason being he was not giving the expression

This song was written by Sahir and composed by Ravi and sung by Mahendra Kapoor for the film Gumrah 1963.In this movie Mala Sinha, the heroine, is called upon to make some serious sacrifices. she loves Sunil Dutt, but she is forced to marry a widower viz Ashok Kumar.This song was sung on piano by Sunil Dutt.

Mukesh is the singer and Shankar Jaikishan composed the music. The picturisation shows Raj Kapoor singing this song seated on a grand piano. Rajendra Kumar is on the verge of taking the sip from his glass when he hears the accusing works “dost dost na raha” The movie is Sangam 1964

What a remarkable song it is. Kishore Kumar sings it with gusto. One can feel the energy that he brings into the song. And the song is picturised nicely as a party song where Dev saab sings at a piano and sings this song,The movie is Teen Devian 1965

Waqt released in 1965 had 2 Piano songs .Sadhna plays piano on both the songs,here i am posting the song in which she is seen playing Piano in the middle of the song.

This song from Anupama (1966) was picturised on Surekha,she  sings this song on a piano wating for  Tarun Bose. Tarun Bose, ever so impeccably dressed in suit/ boot/ tie arrives unannounced and enjoys the singing for a minute and a half before revealing himself to her.

In this song Shammi Kapoor is playing Piano,it is a sad song  This song had become a big rage during its time. Rafi’s voice, followed by Shankar Jaikishan’s music that has led to this humdinger of a song.

The song is “aaj ki raat mere dil ki salaami le le” sung by Rafi and picturised on Dilip Kumar.Shakeel Badayuni was the lyricist while Naushad composed the music for this song from “Ram aur Shyam”. Waheeda Rahman plays the female lead who is supposed to look embarrassed and guilty throughout the song.

This is a song that is sung in the movie by Manoj Kumar sitting in a piano. Apart from being a piano song, this is also a party song.This song also has Mumtaz, and she definitely lights up the screen with her presence.The movie is Patthar Ke Sanam

Here is a piano song from this movie which was sung by Lata and picturised on Simi Garewal.The movie is Saathi 1968.

Here is a well known song from “Aadmi aur insaan”. Here Asha Bhonsle sings the lyrics of Sahir Ludhianvi.This song was picturised as a party song on Mumtaz seen in a Helenesque outfit, with Dharmendra and Feroz Khan looking on. It is sung by Asha Bhonsle. Sahir Ludhianvi is the lyricist. Music is composed by Ravi.

Here is this song from “Laal Patthar” (1971) which was quite popular in its days. It is sung by Kishore Kumar.The song is picturised as a piano song on Vinod Mehra, with Raj Kumar, Rakhi and Hema Malini also visible.

This is a very nice song to listen to, and it was very popular during its days.In this song, real life father and son (Kishore Kumar and Amit Kumar) sing for reel life brothers. Asha Bhonsle sings for Rakhi. Gulshan Baawra wrote the song. R D Burman composed the music.The film was Kasme Vaade 1978.Amitabh Bachhan plays Piano.

Posted by /bolywoodfiles.blogspot.com at 08:57:00 No comments: