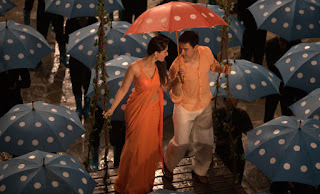 Monsoon in India plays very Important Role.The monsoon season is a blessing for the farmers across the country as well as for agriculture  During the monsoon the fields, crops, trees and plants come alive. The whole of nature comes to life in a 'sea of green' during the monsoons. No single event is more important to India than the coming of the monsoon  It is depicted in all of our literature and songs. It is the inspiration for half of our poetry and ragas  Indian Film Industry can not be left behind,lot of songs and scenes are created by our Dream merchants..Monsoon in Hindi Cinema spells magic, romance, intensity, drama or poetry. Its interpretation varies from context to context resulting in assorted vistas and multiple dimensions of the same. This incredible variety makes it one of the most breathtaking props of storytelling or to showcase the larger-than-life component of cinema.
Rains play quite an important role in movies. They help create scenes expressing a variety of emotions; from romance to pure mischief! Rains represent many things to people in the subcontinent.

The rains are synonymous to romance and form the perfect backdrop for any love-related situation, from sweet confessions of love to the sensuous coming together of two soul mates. And this is not a new found trend, but a ritual that has been practised over the years and never failed audiences and filmmakers alike. Pick up any popular love song and you will see the rains play a crucial role in intensifying the moments of romance and adding to the sizzling chemistry
The Monsoon season in India lasts for 3-4 months in India, Saawan and Bhaadon the Hindi months come during this period,there are plenty of songs based on ‘Sawan’ itself  and that one can even overlook the Baarish/Barsaat/Kaali Ghataa/Megh/Badal or Badariya  songs if one has to make a compilation and that’s what I am going on to in this post. The idea is also to relate to and connect to most of the songs that I will be mentioning over here,I am starting from 1940s onward.

Bandhan”(1940) was directed by N R Acharya for Bombay Talkies, Bombay. The movie had Leela Chitnis, Ashok Kumar, v H Desai, P F Pithawala, Shahnawaz, Suresh, Arun Kumar Mukherji etc in it.
This is a topical song as it is about the arrival of Saawan. Only Audio of this song is available. Leela Chitnis is the singer. Pradeep is the lyricist. This song is composed by Saraswati Devi.

In 1941 a Film "MALA"came with a song"Kahe Barse Jaaye Badariya"here the lyricist wants the rain to stop so that she can meet her lover..This song is sung by Amirbai Karnataki music by Naushad

There’s no rain here, but there’s the anticipation of rain and the hoped-for meeting with a beloved that the rain brings with it. The song from Barsaat(1949)

It is one of the most well known rain songs of all time which shows Raj Kapoor and Nargis in rain, with just one umbrella between them. Raj Kapoor tries to give the umbrella to Nargis, and she gives it back to him, and in the end both of them find themselves under the same umbrella, though it does not help them getting drenched.Here is this iconic song from “Shree 420” (1955).

Here is a song on the same theme from the movie “Do Aankhen Baarah Haath” (1956).Wonderful lyrics written by Bharat Vyas, a rousing, thunderous and a racy composition by Vasant Desai. And the best of all, it is the voices of Manna Dey and Lata.  Listen to the words carefully, each antaraa is so beautifully worded that it touches the heart.

It is a romantic song. At the same time, it is a rain song as well. And, it is a song whose picturisation makes it an incredibly sensuous song as well.This song is from Kaala Bazaar(1960)

This is a rain song par excellence. Everything about this song is outstanding. Shailendra’s lyrics are the real star of this song, I feel and then the music of Salil Chaudhary and the voice of Lata create a heady cocktail. And the song is picturised nicely on Sadhana,

It is one kind of a fun rain song The rain begins and everyone including men, woman and even a fowl is seen running for cover,but their running for cover is not as desperate as that of “proper” people. They try to get under an umbrella, in case they are not carrying one of their own. Raj Kapoor songs are not complete without a few ladies dancing in it. And the song shows a lady seen dancing in rain, with not an umbrella or raincoat with her, and enjoying the rain.

Torrential rains. Car breaks down. Pretty driver steps out. Flirtatious mechanic breaks into a song. There's much to enjoy, on screen and off it, courtesy Madhubala's damp diva and Kishore Kumar's animated bantering in this playful track from Chalti Ka Naam Gaadi.

This song may be less known, but all the attributes of a Talat Mahmood classic can be very much noticed in this song. That way, it is a forgotten gem that needs to be brought up to the notice of Bollywood music lovers. This song is  from “Reshmi Roomaal” (1961) where Talat Mahmood sings for Manoj Kumar. Raja Mehdi Ali Khan wrote the lyrics and the music director was a lesser known name viz Babul.

Jab chaaye kabhi saawan ki ghataa(Reshmi Roomaal) (1961) Singer-Talat Mehmood, Lyrics-Raja Mehdi Ali Khan, MD-Babul
This song is windy and wild, and very sexy; and I wish with *all my heart* I were the heroine in this monsoon cavorting with Shammi.

The song “sawan ke maheene mein” has been sung by Rafi wonderfully well. What is more, it has two versions, viz slower ( sad) and faster (happy) version.
song from Sharabi (1963)

“Sawan ka maheena” really caught the imagination of the public, so much so that this song became the most popular song of the year 1967.Sung by Mukesh and Lata,this song was written by Anand Bakshi and the music direction was by Laxmikant Pyarelal.

The title song of the movie, sung by Rafi, Lata and chorus, picturized on Dharmendra, Asha Parekh and others. It's another gem from the team of Laxmi-Pyare and Anand Bakshi.

A very good romantic song picturized on Rajesh Khanna and Zeenat Aman getting drenched in the heavy rains. Sung by Kishore and Lata, penned by Anand Bakshi and composed by R.D. Burman

A great romantic song, surprisingly in a memorable comedy of Hindi cinema, sung by Lata picturized on Sharmila Tagore (singing for Dharmendra). Written by Anand Bakshi. Composed by S.D. Burman.

Song from Do Raaste

This song is picturised on Dharmendra and Asha Parekh. Anand Bakshi was the lyricist and its litling music was composed by Laxmikant Pyarelal.

The lyrics are great – the guy is asking the rain to come down harder so that his girl friend cant go. A Mukesh song written by Sawan Kumar Tak,music by Usha Khanna

Zeenat Aman dancing in a rain-drenched sari and singing, Haaye haaye yeh majboori, even if she was paired with Manoj Kumar.The music by Lakshmikant Pyarelal, the lyrics by verma malik, Lata’s teasing voice, and Zeenat’s sultry looks and dancing, they all combined to make this song a hit

A joyful Kishore-Asha duet with surprisingly pleasant jovial acting by late Smita Patil with Amitabh Bachchan. It's been written by Anjaan and composed by Bappi Lahari

It's a timeless emotional song with the backdrop of rain, hence should be a part of this list only.sung by Suresh Wadkar and emotionally performed by Vinod Khanna on the screen. The highly emotional, pain-soaked words have been written by Anand Bakshi and the melancholy-filled melodious composition has been done by Shiv-Hari

A melodious duet by Kavita Krishnamurthy and Kumar Sanu, picturized on Manisha Koirala and Anil Kapoor, penned by Javed Akhtar and composed by R.D. Burman.

Sung by Babul Supriyo and Alka Yagnik, music by Jatin Lalit,Karan and Rhea express their feelings for each other in the song as the rain pours
Hum Tum” from Hum Tum (2004)

Posted by /bolywoodfiles.blogspot.com at 08:15:00 No comments: