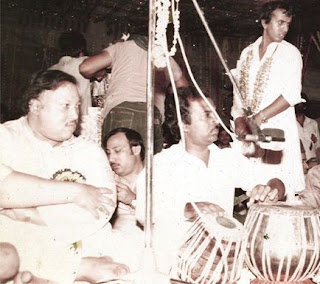 Nusrat Fateh Ali Khan known as The King of Kings of Qawwali performed at the wedding of Rishi Kapoor and Neetu Singh. It was possibly his first performance in India. It was Raj Kapoor who heard him casually somewhere and liked his singing. He kept him in mind that whenever he will get a chance he would invite Nusrat Fateh Ali Khan to India.
Born(13 October 1948 – 16 August 1997) in Faisalabad, Khan had his first public performance at the age of 16. He was the fifth child and first son of Fateh Ali Khan, a musicologist, vocalist, instrumentalist, and qawwal. The tradition of qawwali in the family had passed down through successive generations for almost 600 years. In 1964, Khan's father died, leaving his musical education under the supervision of his paternal uncles, Mubarak Ali Khan and Salamat Ali Khan.
In 1971, after the death of his uncle Mubarak Ali Khan, Khan became the official leader of the family Qawwali party and the party became known as Nusrat Fateh Ali Khan, Mujahid Mubarak Ali Khan & Party. Khan's first public performance as the leader of the Qawwali party was at a studio recording broadcast as part of an annual music festival organized by Radio Pakistan, known as Jashn-e-Baharan.
His first major hit in Pakistan was the song Haq Ali Ali, which was performed in a traditional style and with traditional instrumentation. The song featured the restrained use of Khan's Sargam improvisations. He also contributed songs to and performed in, several Pakistani films. In the summer of 1985, Khan performed at the World of Music, Arts and Dance (WOMAD) festival in London.Khan's album Intoxicated Spirit was nominated for a Grammy Award for Best Traditional Folk Album in 1997. That same year, his album Night Song was also nominated for a Grammy Award for Best World Music Album.
Shortly before his death, he composed music for three Bollywood films, which includes the film Aur Pyaar Ho Gaya, in which he also sang for "Koi Jaane Koi Na Jaane" on-screen with the lead pair, and "Zindagi Jhoom Kar"; He also composed music for Kartoos, where he sang for "Ishq Da Rutba", and "Bahaa Na Aansoo", alongside Udit Narayan. He died very shortly prior to the movie's release. His final music composition for Bollywood was for the movie, Kachche Dhaage, where he sang in "Iss Shaan-E-Karam Ka Kya Kehna". The movie was released in 1999, two years after his death. The two singing sisters of Bollywood, Asha Bhosle and Lata Mangeshkar sang for the songs he composed in his brief stint in Bollywood. He sang "Saya Bhi Saath Jab Chhod Jaye" for Sunny Deol's movie Dillagi. The song was released in 1999, two years after Khan's death. He also sang "Dulhe Ka Sehra" from the Bollywood movie Dhadkan which was released in 2000.
He is widely considered to be the most important qawwal in history. In 1987, he received the President of Pakistan's Award for Pride of Performance for his contribution to Pakistani music. 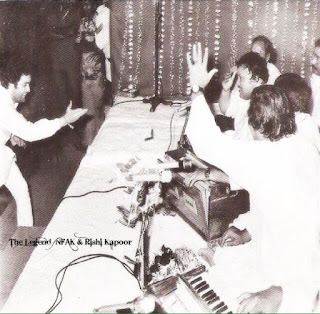 The credit of introducing this great singer to India goes to the great Showman of India Raj Kapoor. who invited him for the sangeet ceremony of his son Rishi Kapoor. He sang all night. The guests were stunned by his performance! The gaana bajaana [musical celebrations] went on for days.
The invitation was, in fact, extended to Nusrat by famous Pakistani actor Mohammad Ali. On receiving the invitation Khan was thrilled, more so for the chance to visit Ajmer Sharif Dargah, the famous shrine of Sufi Saint Moinuddin Chishti, in Rajasthan.
The wedding party boasted of a number of artists and musicians from that era. Surprisingly he decided to treat the guests to Indian classical vocals rather than his trademark qawwali. It is said that his performance created a flutter, with senior musicians climbing to the stage to personally congratulate the then 31-year old.
After this programme, he became darling of many of Music lovers in India. Nusrat went on to sing live and perform at a number of concerts across India in the years to come, but it was only with 1994's Bandit Queen that he first composed music for an Indian film. His first recorded Bollywood song came about in 1996, thanks to Aur Pyar Ho Gaya, starring Aishwarya Rai and Bobby Deol.