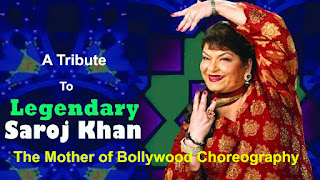 Saroj Khan (22 November 1948 - July 3, 2020),  started her career as a child artist at the age of three with the film Nazarana as child Shyama. She worked as a background group dancer in many dance songs in the late 50s.
She got her break as an independent choreographer, with Geeta Mera Naam (1974).before that she was assistant to dance director  B. Sohanlal.  Her first breakthrough came with Subhash Ghai's Hero (1983), but it was Sridevi's Nagin dance in Nagina (1986) where she was noticed for her talent, followed up by Mr. India. Next, she worked with Madhuri Dixit in 'Ek Do Teen' number, Tezaab (1989), and later in Khalnayak, where she choreographed the Choli Ke Peeche' number.
Sridevi and Madhuri Dixit were her favs. dancers in Bollywood. Sridevi danced to her steps in Mr. India's Hawa Hawai and Chandini's 'Mere Hathon Mein'.Madhuri Dixit starting with the hit Ek Do Teen in Tezaab (1988), Tamma Tamma Loge in Thanedaar (1990), and Dhak Dhak Karne Laga in Beta (1992).
With a career span of over forty years, she choreographed more than 2000 songs Many of her choreographed songs have been iconic. Saroj Khan was the recipient of the most National Film Awards for Best Choreography with three wins. She was the first recipient of the filmfare Best Choreography Award. Filmfare instituted this award after watching the excellent choreography and audience response to Khan's song "Ek Do Teen" from Tezaab. Saroj Khan went on to have a hat-trick at the Filmfare awards winning consistently for 3 years from 1989 to 1991. She also holds the record for winning the most Filmfare Best Choreographer Awards, winning 8 times.
She was admitted to Guru Nanak Hospital at Bandra, Mumbai on June 17, 2020. She was admitted with breathing complaints, and died of cardiac arrest at 1:52 am early on Friday, July 3, 2020.
Some of her Iconic Choreography

Posted by /bolywoodfiles.blogspot.com at 08:50:00 No comments:

Ek DO Teen- The Song that Shot Madhuri Dixit to Fame 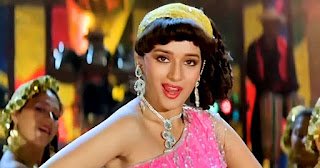 "Ek Do Teen" featured in 1988 film Tezaab which proved to be Madhuri’s first claim to fame. The song was choreographed by Saroj Khan, sung by Alka Yagnik and composed by Laxmikant Pyarelal.
Before the release of the film, the song became a super hit, Looking to its popularity a male version of this song was included in the film after the release of the film. The song was driving people crazy. Ek Do. Teen...they hum from the shower to the office. From the office to the bedroom. And everywhere else in between. The film was released on 11th Nov 1988 and all the cinema halls all over India witnessed a huge crowd. It ran in theatres for more than 50 weeks, becoming a golden jubilee, and it was the highest blockbuster at the box office for the year 1988 The film's soundtrack album sold more than 8 million units, becoming the second best-selling Bollywood music album of 1988.
The iconic hook step by Madhuri Dixit in this song was the creation of the choreography genius Saroj Khan. She was the first recipient of the Filmfare Best Choreography Award. Filmfare instituted this award after watching the excellent choreography and audience response to Khan's song "Ek Do Teen" from Tezaab.
This song and dance were unique in itself, till that time in Indian cinema it had never happened that dance is being performed on stage, but the audience isn’t sitting, they are standing the way the crowd stands on Pop concerts in the west. The director of the film N Chandra wanted Saroj to have such an atmosphere that the crowd going wild and tearing their clothes with excitement.
For this song, Madhuri Dixit had to rehearse for15 days  This song was finally shot in front of a real crowd of 1000 people, everybody connected with this song was very proud that an iconic dance is in making.
In a recent tweet, Madhuri Dixit remembered the dance number and said, “The hook step became so popular at that time. I was shocked to know that people used to demand the song to be replayed in the theatres before the movie could continue & fling money on the screens. Everyone had started calling me Mohini.
This song was inspired by the opening bars of an old popular song "Chanda mama door ke" composed by the famous yesteryears music composer Ravi for the film Vachan.
It is almost 32 years completed of this song and its popularity is still there among the young generation. This song was recreated in the 2018 film Baghi 2.Now Jacqueline, dressed similarly in a pink and yellow skirt danced to the new version of the song.
Very recently Tiktok Users started a #EkDoTeenChallenge. Madhuri Dixit also joined TikTok to celebrate the momentous occasion with her fans, taking up the challenge herself to groove on her popular track with the community of over 200 million users. The #EkDoTeenChallenge clocked a phenomenal over 140 million views in just two days! 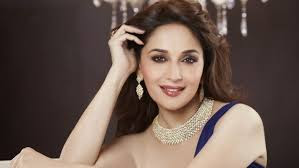 Madhuri Dixit is one of those few actresses who is aging so gracefully that with every passing year, she only ends up looking even more beautiful. She has given us some iconic songs like , Ek Do Teen, Tamma Tamma Loge,Choli Ke Peeche Kya hai, Kay Sera Sera that are definitely going to stay with us forever. she is blessed by the Gods of dance and in the industry that heavily relies on its culture of song and dance, she became a goddess.
She was born on 15th May 1967,she was a born dancer,started dancing at the age of 3.She  went on to practice the art of Kathak and later on to become a trained professional Kathak dancer.Pandit Birju Maharaj, a Kathak dancer, who choreographed Dixit in the film Devdas for the song "Kaahe Chhed", calls her "the best Bollywood dancer due to her versatility.
She made her acting debut in Rajshri Productions' movie Abodh in 1984 but got real success with Tejab released in 1988.The dance song Ek Do Teen made her famous throughout India.With the success of this film she became the favourite of the masses.n 1989 Subhash Ghai's drama Ram Lakhan was released, in which she was paired once again with Anil Kapoor. This film also became a super-hit,Thereafter Dixit got success in Rajiv Rai's multi-starrer action thriller Tridev, Now she was among the top 3 heroines of Bollywood.
In the early nineties she gave many hit films like Dil opposite Aamir Khan, Saajan opposite Salman Khan and Sanjay Dutt, Beta opposite Anil Kapoor,Dixit's performance of Saraswati earned her critical acclaim.the highlight of the film was undoubtedly Dhak Dhak Karne Laga – probably the sexiest and most popular dance of Madhuri's career.
In 1993, Dixit starred in the controversial super-hit Khalnayak opposite Sanjay Dutt and Jackie Shroff. The audiences ran in droves to witness the Madhuri Dixit magic. In every scene, she holds you captive with her stunning beauty, demanding screen presence, expressive acting and excellent dancing skills. Saroj Khan’s dance choreography is entertaining to watch, particularly in "Choli Ke Peeche Kya Hai".
Then came  Hum Aapke Hain Koun.in 1994 opposite Salman Khan. The film became one of the biggest hits in the history of Hindi cinema.1995 saw Dixit star in the hit Raja opposite Sanjay Kapoor.Her next release was David Dhawan's Yaraana opposite Rishi Kapoor, in which she played a dancer on the run from her abusive lover.She starred in Yash Chopra's musical romance Dil To Pagal Hai (1997), opposite Shahrukh Khan and Karisma Kapoor. Her role of a woman faced with a moral dilemma in a love triangle fetched her the fourth Filmfare Best Actress Award.
Her one of the memorable films was  Devdas, co-starring Shahrukh Khan and Aishwarya Rai. She portrayed Chandramukhi, a courtesan who is in love with the title character.It turned out to be her last film for a while as she shifted to Denver with her family.
In 2006, Dixit returned to India with her family, and acted in cinematographer Anil Mehta's dance film Aaja Nachle (2007) after that she appeared in  Dedh Ishqiya (2014).She also appears as Judge in many dance competitions show on TV.
In this blog I have selected the Iconic Dance numbers of Madhuri Dixit.

Posted by /bolywoodfiles.blogspot.com at 10:01:00 No comments: