Remembering ROSHAN the Music Director on his 99th Birth Anniversary 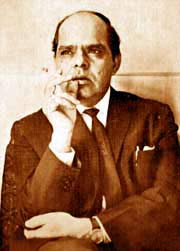 Roshan was born in Gujranwala now in Pakistan.In 1948, He came to Mumbai to find work as a Hindi film music director and became Assistant of Music Composer Khawaja Khurshid Anwar in film Singaar. He struggled until meeting Kidar Sharma, who gave him the job of composing for his film Neki aur Badi (1949). While this film was a flop, Roshan emerged as a player on the Hindi film music scene with the film Baawre Nain, released the following year..

Baawre Nain established Roshan as Music director at par with other famous music directors of that era.The movie had 9 songs and almost ll the songs were hit.The song"Khyaalon Mein Kisike Is Tarah" became immortal song.This song was sung by Geeta Dutt ( then she was Geeta Roy) and Mukesh, both newcomers as playback singers. The voice of Geeta Dutt sounds so refreshing and different from what we are used to. Mukesh, just breaking out of K L Sahgal’s influence.


Roshan was undoubtedly helped by the lyricists, debutant Indeevar and Kaif-Irfani- who penned sheer poetry, including “Dil Tujhe diya tha Rakhne ko, Tune Dil ko Jala ke Rakh Kiya” and “Tara Toote Duniya Dekhe”. Lata Mangeshkar and Mukesh, needless to mention, made them immortal in their voice.
He was not always commercially successful. He gave Indeewar and Anand Bakshi their first breaks in the industry as lyricists; these two would later become two of the most sought-after songwriters in Mumbai from the late 1960s onwards.


In 1952 his another gem of a movie"Naubahaar" starring Ashok Kumar and Nalini Jaywant released,again its music became very popular,Another immortal song “Ae ri main to prem deewaani” is a traditional Meera Bhajan which is adapted as a lyrics by Satyendra Athaiyya. It is sung by Lata and it is picturised on Nalini Jaiwant and Ashok Kumar.Most of the songs were sung by Lata Mangeshkar, one by Rajkumari and one by Talat Mahmood. Whether it was the vivacious “Unke bulawe pe dole mera dil” or the tenderness of “Dekho ji mera jiya churaye liye jaaye” or the devotion and pathos of “Ai ri main to prem diwani” (which Lata has included in her best ten list) or the restlessness and anguish of “Woh paas nahin majboor hai dil, hum aas lagaye baithe hain”, Lata has shone like a dazzling star.
In the 50s Roshan gave many musical hits likr Shesham and Anhonee,the song "Main Dil Hoon Ek Armaan Bhara" is a classic from Talat Mahmood This is a song sung by Talat Mehmood and picturised on Raj Kapoor. It is a rare combination of singer and actor, but the song itself is quite well known


Roshan in my opinion was a very under-rated music director who got his due recognition very late. He created some of the most outstanding scores. His biggest strength was mixing of Folk Music with classical music, this approach made him different from other music directors. In1963 Filmfare Best Music Director Award for Taj Mahal.


Roshan had been suffering from chronic heart trouble for over 20 years. He died of a heart attack in Mumbai, Maharashtra, India, on 16 November 1967 aged 50, leaving behind a wife, two sons and two daughters. Besides immediate family, Roshan left great admirers of extended family—Nagrath and Khokha family

Posted by /bolywoodfiles.blogspot.com at 10:41:00 No comments: