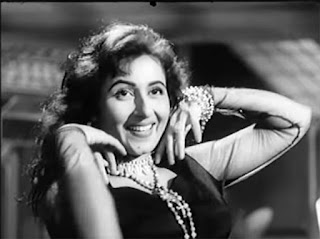 It is said that music brings heart together ,Bollywood is one place where you can get major inspiration in almost everything.Seducing the Hero by the heroine or a vamp is always been there in hindi films start from 1940s till now.There are many songs for such situation.Here are 20 such Bollywood Songs

This song is a seduction song which is sung by Geeta Dutt.Majrooh Sultanpuri is the lyricist. Music is composed by O P Nayyarfor the film Baaz 1953
Song from Baaz 1953

The song is from “C I D” and picturised on Waheeda Rehman. Shamshad Begum is the singer who sings this seductive song in 1950s style. Music is given by O P Nayyar
Song from C I D 1956

This song is sung by Geeta Dutt. It is picturised on Helen who is seen lip syncing this song in a bid to seduce Dev Anand.The film was Love marriage 1959,Shailendra is the lyricist. Music is composed by Shankar Jaikishan.
Song from  Love marriage 1959

This seduction song from “Do Kaliyan”1968 sung by Asha Bhonsle, Lyrics-Sahir Ludhianvi, MD-Ravi
Song from Do Kaliyaan 1968

This song is sung by Asha Bhonsle. It is picturised as a suduction song on Farida Jalal and Dev Anand for Mahal 1969, Lyrics-Anand Bakshi, MD-Kalyanji Anandji
Song from Mahal 1969,

Posted by /bolywoodfiles.blogspot.com at 10:32:00 No comments: