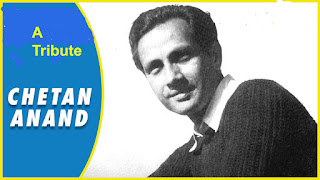 Chetan Anand (3 January 1915 – 6 July 1997), while he was teaching History, wrote a film script on king Ashoka, which he went on to show to director Phani Majumdar in Bombay.  Phani Majumdar cast him as a hero in his Hindi film, Rajkumar, released in 1944. The film flopped and so his career. He soon took to film direction The first film he directed was Neecha Nagar. Though the film won the Golden Palm Award at the first Cannes Film Festival in 1946 but couldn't be released.No distributor was ready to distribute the film, the cinema halls were asking for heavy rentals.  This being Chetan's first directorial venture went unseen depressed him. He did not get any work offer after that.
After the release of  Ziddi Dev Anand was going great as an actor, a plan came to his mind. Without discussing with Chetan he went ahead to gather money to start a banner where Chetan could direct films.
After he was assured by one of his producers to give him the required money, he approached Chetan and said: " Fly the Flag". He asked him to name the banner where both of them will work together.
He pulled out bundles of notes and showed it to Chetan and said start a film with me as Hero and Suraiya as Heroine. That was the day when he saw a smile on the face of his brother after one and a half years
The fist film Afsar was started in 1949. The film was based on Nikolai Gogol's play The Government Inspector. This play.was played earlier many times by Balraj Sahni and Dev himself in Bombay.

.Unfortunately, the print of this film is not available. The film was an average success.  After this, the next film was Baazi released in 1951. This was directed by Guru Dutt as promised by Dev Anand to Guru Dutt on their struggling days. The film was a hit that established Navketan.  It became a training ground and school for many famous directors, producers, composers, and technicians. 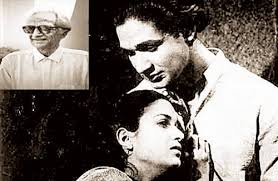 The next film he directed was Navketan's Aandhiyan released in 1952 was again not a successful. So he refused to do the Navketan's next film Humsafar, in this film he plays the role of Vivek who is a good guy. This film also failed. 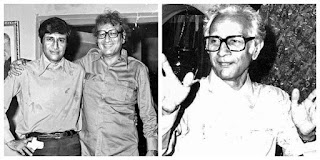 The next film he directed was Taxi Driver released in 1954, it was a smash hit film, the first time he experienced success in Bollywood. After Baazi and Taxi Driver, the Navketan was a big banner. The next film of this banner was Funtoosh released in 1956, he directed this film but the film was not a runaway success. During the making of this film, some differences between the two brothers surfaced. He decided to do outside banner films. He directed Anjali (1957), Arpan(1957)and Kinare Kinare (1963) He acted in all the three films. He started his own company with Haqeeqat (1964) banner called Himalaya films. This banner produced films like Heer Ranjha, Hanste Zakhm, Hindustan Ki Kasam, and Saheb Bahadur. He also directed Navketan's Jaaneman after a gap of more than 20 years.
In the 1960s, well after being estranged from his wife, Anand fell in love with Priya Rajvansh, who had made her debut as a heroine of his film Haqeeqat. The two fell in love during the making of this film and their relationship lasted all their lives.
He died on 6 July 1997, at the age of 76 in Mumbai

Posted by /bolywoodfiles.blogspot.com at 11:05:00 No comments: 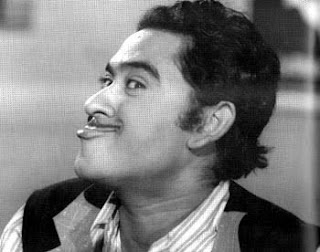 Kishore Kumar started his cinema career as a chorus singer at Bombay Talkies, where his brother Ashok Kumar worked. Kumar's first film appearance was in Shikari (1946), in which his brother, Ashok played the lead role.He played the role of a Police Inspector in his 2nd film Shehnai in 1947.
In 1949, he settled in Mumbai. Kishore,  Kumar played the lead in the Bombay Talkies film Andolan (1951), directed by Phani Majumdar. Although he got some acting assignments with the help of his brother, he was more interested in becoming a singer.
Between 1946 and 1955, Kumar appeared in 22 films of which 16 were flops and since he was disinterested in taking up acting as a career, he would find ways to be in the bad books of the director or producer, so that they throw him from their films. It was only after the success of films such as Ladki, Naukari, Miss Malaysia, Char Paise and Baap Re Baap that Kumar developed interest in acting seriously, which resulted in him having successful films as the lead actor between 1955 and 1966.Some of his other successful films as an actor are Paisa Hi Paisa (1956), New Delhi (1956), Naya Andaz (1956), Bhagam Bhaag (1956), Bhai Bhai (1956), Aasha(1957), Chalti Ka Naam Gaadi (1958), Dilli Ka Thug (1958), Jaalsaaz (1959), Bombay Ka Chor (1962), Chacha Zindabad (1959), Man-Mauji(1962), Jhumroo (1961), Half Ticket (1962), Mr. X in Bombay (1964), Shreeman Funtoosh (1965), Ek Raaz (1963), Ganga Ki Lahren (1964), Hum Sab Ustaad Hai (1965), Haal E Dil, Pyar Kiye Jaa (1966) and Padosan (1968).
A devout fan of K.L.Saigal, Kishore Kumar deeply respected Rabindranath Tagore and was an ardent admirer of Hollywood actor-singer Danny Kaye. He hung the portraits of all these three personalities at his Gaurikunj residence and would bow respectfully before them everyday as a rule. Interestingly, the singer considered the trees in his garden his closest friends and even had names for them!
Kishore Kumar also produced 14 films, and wrote the story for these films. Six of these films were not completed. [1] He is also credited with writing the screenplays of five films, two of which remained incomplete. He also directed 12 films, four of which were abandoned.  Kishore Kumar acted in 88 Hindi films.
Here are some songs picturised on Kishore Kumar