The Sweet Melody With Flute is Missing today in Bollywood Songs 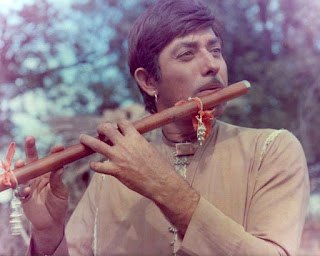 The beautiful sounds of flute gave us many evergreen and sweet melodies.The music composers of Golden Era used their creativity, inspiration and their expertise in arrangements to make attractive use of flute.Stalwarts like Naushad, S D Burman and Roshan seemed to have a preference for flute and used it extensively in some of their songs.S D Burman used flute in many of his songs to provide a breezy and light touch to complement the vocals composed in his unique style. But, it is his sad number Jaayen to Jaayen kahaan (Taxi Driver) that has extensive use of flute. Talat’s voice and the flute combine to create unforgettable pathos.
Remember the songs Gaye jaa geet milan ke (Mela) and Tu mera chaand main teri chaandni (Dillagi) What a beautiful and extensive use of the flute by Naushad
When we talk of a flute one name comes in our mind is that of Pandit Hari Prasad Chaurasia He was involved in many of  the great melodies created in 60s. He played flute in many songs of the great Music directors of that time.
In this Blog I have selected 15 such songs having sweet melodies with flute.