Prakash Mehra- The Man who Created the Recipe of Masala Films 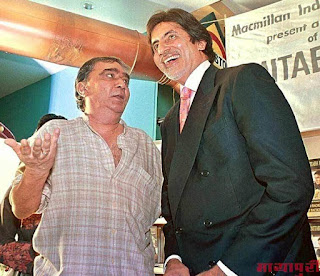 In the 70s Prakash Mehra and Manmohan Desai gave birth to the 'formula' film. His films  revolving around a predictable plot, but touching on the social and political situation of the time. Being a smart Bollywood director, Mehra knew that a successful mainstream movie should be like a tasty Thaali, blending a host of ingredients.
Between 1973 and 1990, Prakash Mehra worked with Amitabh Bachchan on 8 films. These movies were not just blockbusters. They remain bookmarks of our cinematic memory. Anyone who grew up watching Hindi movies in the 1970s and 80s, movies like Zanjeer, Muqaddar Ka Sikander, Khoon Pasina, Hera Pheri (1976 film),Laawaris, Namak Halaal and Sharabi would surely agree to that.
Prakash Mehra (13 July 1939 – 17 May 2009) started in the late 1950s as a production controller. In 1968, he directed Shashi Kapoor who played a double role in Haseena Maan Jayegi. . In 1973, he produced and directed Zanjeer,from here began the journey of the  super Hit Producer and Director Prakash Mehra..

Mehra made his finest movies with Bachchan. But he also made some interesting films with other actors too. Such as dacoit dramas: Mela (Sanjay, Feroz Khan and Mumtaz) and Samadhi (Dharmendra, Jaya Bhaduri and Asha Parekh). The latter had the track, Bangle ke peeche teri beri ke neeche, which GenNow can identify with for its remixed version.
And who can forget Haath Ki Safai (Randhir Kapoor, Vinod Khanna and Hema Malini, 1974) with the superhit song, Peene walon ko peene ka bahana chahiye.  All these films fared reasonably well at the cash counters.
By the late 1980s, just like his main actor, Mehra seemed to have lost his touch. But while Bachchan reinvented himself and emerged in a new avatar, the producer-director never bounced back.
Mehra will be remembered. Not merely as the man who gave Big B his first big box-office hit. His better films always had something extra, something special.
Songs from Prakash Mehra films
Song from Haseena Maan Jayegi (1968)

Posted by /bolywoodfiles.blogspot.com at 13:10:00 No comments: