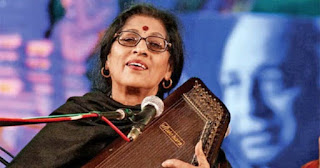 Kishori Tai, as people call her fondly was born on 10th April 1932. Her father died when she was 7 years old, raised and taught music primarily by her mother, the classical vocalist Mogubai Kurdikar.
Young Kishori began to receive vocal lessons in Hindustani classical music from Anjanibai Malpekar of the Bhendibazaar Gharana and later received training from tutors of several other Gharanas.
In addition to her career as a classical vocalist, she was known for her performances of lighter classical pieces, with a wide repertoire of Thumris and Bhajans, She became interested in film music and sang playback for the 1964 movie Geet Gaya Patharon Ne but after singing in this film she stayed away from the film music because she found it compromising on the Swaras over the lyrics.
Her mother was strictly against her singing in films is reported to have told Amonkar that she would be forbidden from touching her mother's Tanpura if she would continue to work in the film industry.,
At the age of 25 she almost lost her voice, she tried all type of treatment, It took two years for her to regain her voice. After that, she started to light classical music with a wide repertoire of Thumris and Bhajans, as well as some performances for film soundtracks.
Amonkar did return to playback singing 26 years later, for Govind Nihalani’s Drishti (1990). She agreed to sing for Drishti because she was allowed to compose the tunes. Amonkar sang Ek Hi Sang, written by Vasant Dev and composed in Raag Bhopali. It has notes similar to Jyoti Kalash Chalke (Bhabhi Ki Chudiyan, 1961), based on Raag Deshkar. Another song Meha Jhar Jhar Barsat Re is composed in the style of Raag Malhar,Drishti features a number of alaap tracks recorded in Amonkar’s voice and used in the background.
Many who studied her music says she has liked singing light classical music in the beginning and that style influenced later in all her classical singing as well. She applied her own interpretations and made striding changes to the Jaipur Gharana branch. Jaipur Gharana, which is known as a style that demanded strict following of its technical details was lacking a lot in its interpretation of the raga bhavas when Kishori started singing publically. Kishori brought emotions into the notes by staying strong with the basic techniques. She was an artist who used those notes to express many feelings and emotions that arose out of her ‘Manodharma’.
She is credited for re-interpreting many ragas in her own ways. Her vocal quality was unmatched with not a single blemish in any of her performances we all heard so far. These aspects of her singing are considered as her biggest contribution to Hindustani music. She as a musician was very methodical in her riyaz and environment where she could sing.
Kishori Amonkar never wanted to go abroad and she insisted that if anybody wants to listen to her they have to come to India. She was an introvert to the extent that she can’t even stand stage lights on her face while she performed; she says that her concerts are for her listeners to listen and not watch her singing.
She never played to the gallery. She used to say that she sings for herself. I want to get involved and focus on the abstract. I have to forget my body then. For that, I need my audience’s help, not their interruptions. People have to understand that music isn’t entertainment.
There are many stories about her refusing to sing in a program due to the misbehavior of the audience. Once Amonkar refused to sing further. When an industrialist’s wife once ordered a paan during her performance, Amonkar screamed, “Am I a kothewali to you?” From editors and politicians to industrialists and famous artistes, many have faced Amonkar’s wrath during concerts.
Amonkar received several of India's national awards and civilian honors, including the Padma Bhushan, in 1987, and Padma Vibhushan in 2002. She was awarded the Sangeet Natak Akademi Award for 1985 and the Sangeet Natak Akademi Fellowship for 2009
She died on 3 April 2017 in her sleep, a week before her 85th birthday, at her residence in Mumbai.

Posted by /bolywoodfiles.blogspot.com at 12:38:00 No comments: