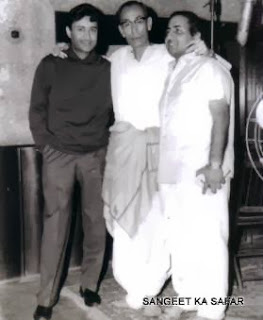 Sachin Dev Burman had a great affinity for  Dev Anand; so much so that the former used to say that his middle name Dev was for his favourite star, Dev Anand. Similarly, Dada had a great liking for Rafi. They together gave incredible music to the industry.”As far as the trio together is concerned, some of their memorable songs are from Nau Do Gyarah(1957), Kala Pani (1958),   Bambai Ka Babu, Kala Bazar (1960), Tere Ghar Ke Samne (1963), Guide, Teen Deviyan (1965) and Jewel Thief 1967
Many would recall that Rafi started singing for SD Burman much earlier (1947 movie Do Bhai, for example, with the song: Duniya Mein Mere Aaj Andhera hi Andhera),  for Dev Anand Rafi sang in CID 1955  Aankho Hi Aankhon Mein Ishara ho Gaya. but when this combination came together it created history.
The first time Burman Da gave Mohammad Rafi a chance to give a voice to Dev Anand was Nau Do Gyarah, 1957 (written by Majrooh Sultanpuri), Aaja Panchhi Akela Hai, Soja Nindiya ki Bela Hai. How effortlessly now Rafi becomes the romantic voice of Dev Anand, as if declaring to earlier voices of Talat and Hemant that he had arrived.
Remember the songs from Kala Pani " Hum Bekhudi Mein " and "Achha ji main haari chalo maan jao na" ,  the great hits of this trio after that many hilt song were created. Here are a few of these great songs.

Famous Trio of Brothers or sisters in Bollywood 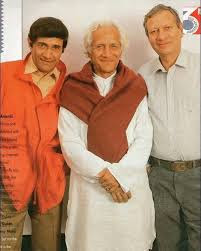 Sibling’s actors in Bollywood is not uncommon but when it comes to three brothers and all of them actors, is rare. There have been instances where three brothers from the same parents have worked in different departments of film making.The first of such Brother,s Trio comes in our mind is Raj Kapoor,Shammi and Shashi Kapoor.The other famous Brother Trio was Dev Anand,Vijay Anand and Chetan Anand.At present Salman,Arbaaj and Suhail Khan are doing great in Bollywood.In this blog I have selected 10 of such Trio of Bollywood. 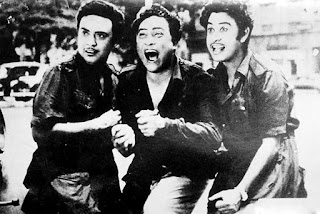 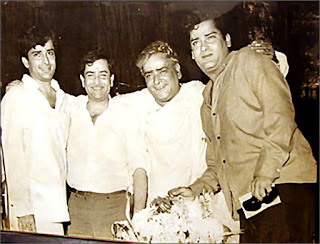 The trio who ruled the box-office in different eras. Raj tasted immense success as an actor, producer and director. Whereas Shammi became the dancing stars of the 60’s and youngest Shashi was one of the biggest stars of the 70’s.Surprisingly all the three brothers jointly never worked together in any film but the combination of 2 brothers worked in many films. Raj Kapoor and Shammi Kapoor have worked jointly in 3 films. The first film they did was Char Dil Char Rahen (1959) after that they appeared in Naseeb (1981) and  in Prem Rog Shammi Kapoor acted while Raj Kapoor Directed the Film.Raj Kapoor and Shashi Kapoor have worked jointly in 2 movies.In Vakil Babu 1982 both acted while in Satyam Shivam Sundaram Shashi acted and directed by Raj Kapoor.Shammi Kapoor and Shashi Kapoor have worked jointly in 5 movies.
Song from Char Dil Char Rahen 1959 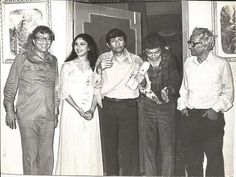 After ‘Kapoor’s it was the ‘Anand’ brothers who gained prominence in Bollywood. Chetan, the eldest of the three made his directorial debut with 'Neecha Nagar' which became India’s first film to win an award at Cannes. He was more into direction than acting. Dev became the evergreen hero of Indian cinema who dominated the silver screen from the 50’s to the 80’s and delivered some of the biggest hits. Vijay, gained fame more as a director than an actor with classics like 'Teesri Manzil', 'Guide', ‘Jewel Thief’, Tere Mere Sapne and ‘Johnny Mera Naam’. The Anand brothers shared screen space only once in ‘Kala Bazaar’.Chetan Anand and Dev Anand have worked jointly in 8 movies.They acted together in 2 films,Kinare Kinare and Kala Bazar.Vijay Anand and Dev Anand have worked jointly in 6 movies.Both of them acted in Kala Bazar and Tere Mere Sapne He was also appeared in small scene in a song of Tere Ghar Ke Samne.
Scene from Kala Bazaar 1960 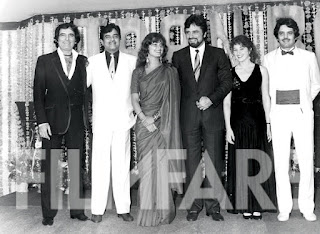 The stylish actor-director Feroz Khan was the most loved and popular among his brothers. He directed films like ‘Apradh’, ‘Dharmatma’, ‘Qurbani’ and ‘Janbaaz’ and acted in numerous cowboy flicks. Sanjay was also famous to a large extent by doing some memorable films like ‘Dosti’, ‘Dus Lakh’, ‘Ek Phool Do Maali’, ‘Dhund’ and ‘Abdullah’. The youngest, Akbar couldn’t really make it big, he ended up acting in a handful of films and directing ‘Haadsa’ and 'Taj Mahal: An Eternal Love Story', which didn't do well at the box office.All the three never worked together. Feroz Khan and Sanjay Khan have worked jointly in 3 movies.Upaasna (1971),Mela 1971 and Nagin (1976) were the films in which both acted together. Feroz Khan and Akbar Khan have worked jointly in 1 movies.The most popular movies of Feroz Khan and Akbar Khan are Anjaan Raahein
Scene from Upaasna 1971 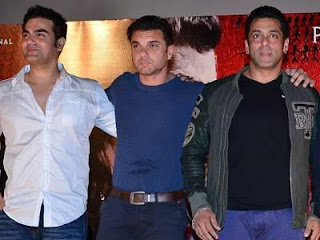 Salman leads the pack who continues to break box-office records till date. Sohail and Arbaaz haven’t made it that big compared to Salman but both have been successful filmmakers.The trio of Khan Brothers first came in 1998 film Pyar Kiya To Darna Kya .Sohail directed Salman and Arbaaz in this film.In 2013 the trio acted together in  a film Amar Akbar anthony Remake Directed by David Dhawan
Scene from Pyar Kiya To Darna Kya (1998) 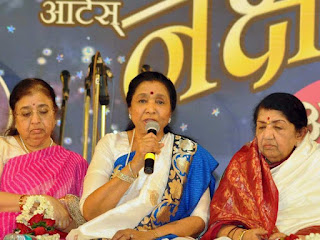 The Mangeshkar family is a prominent Indian family, headed by Deenanath Mangeshkar. Many members of the family have been successful singers/music composers in the Hindi film industry.Lata Mangeshkar is one of the best-known and most respected playback singers in India.Asha Bhosle  is equally famous and a versatile singer.Usha Mangeshkar is the youngest sister among Lata Mangeshkar, Asha Bhosle and Meena Khadikar, and elder to her music-director brother Hridaynath Mangeshkar. She came into the spotlight as a playback singer after singing some devotional songs for the low-budget movie Jai Santoshi Maa (1975), which became an all-time blockbuster.The three sisters sang few songs together, 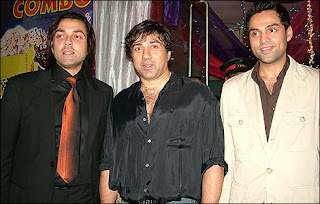 It’s always family first for the Deols and actor Abhay Deol is no exception to this norm.Sunny and bobby are sons of Dharmendra and Abhay is Dharmendra's nephew.The trio never appeared in a movie together Bobby Deol and Sunny Deol have worked jointly in 12 movies.The most popular movies of Bobby Deol and Sunny Deol are Yamla Pagla Deewana, Heroes, Apne, 23rd March 1931 Shaheed, Dillagi, Aur Pyar Ho Gaya ...., 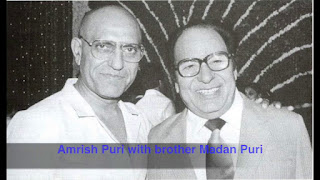 Madan Puri - a known villain in the 60’s and 70’s but gradually moved to character roles.The  Eldest brother Chaman was mostly seen playing father to many actors and actresses in the 50’s and 60’s. But it was Amrish who became the most popular and is remembered as one of the greatest villains of Indian cinema.Chaman Lal Puri was the eldest of the three brothers,he came first in films,he being the first cousin of the singer K. L. Saigal, with whose help he started to make a mark in Bollywood. Chaman Puri appeared in the films `Afsana` (1951), `Patang` (1960), `Phool Bane Angarey` (1963), `Bahu Beti` (1965), `Mamta` (1966), `Bombay 405 Miles` (1980) and `Aulad` (1987).Amrish Puri and Madan Puri have worked jointly in 10 movies.The most popular movies of Amrish Puri and Madan Puri are Mashaal, Hero, Andhaa Kaanoon ... 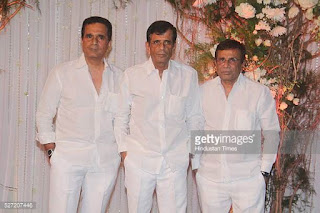 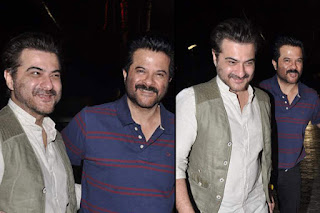 Boney is the eldest of the three brothers.He is a producer and Director,All the three never worked together in a film but  Anil Kapoor has worked together with his sibling, maker Boney Kapoor, in a few effective movies like Mr. India, Judaai, No Entry and Pukar,Sanjay Kapoor was introduced by Boney Kapoor from the film Prem in 1995 which was produced by  Boney.In 1999 again in Sirf Tum.
Randheer Kapoor Rishi Kapoor Chimpu Kapoor Posted by /bolywoodfiles.blogspot.com at 13:27:00 No comments: