Missing The Rhythm of Castanets 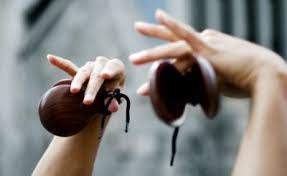 Today's generation may not be familiar with the sound of Castanets but once this instrument was used extensively by almost all music directors in the golden era of Hindi film music.

Recall the song "Hai Apna Dil To Awara" from Solva Saal, the song starts with the sound of Castanets immediately after the humming sound of Hemant Kumar.
Though the song is famous for the Mouth organ played in between by Sunder but the sound of Castanets is heard throughout the song.
Aaiye Meherban from Howrah Bridge is another song in which Castanets play a lead role and can be identified clearly in the song.
Castanets are relatively tiny instruments that fit into the palms of the two hands and were originally used in European music. They can be played quickly in continuous notes to create a roll type of sound, or they can be played with each click on the castanet being a discrete note.
When were Castanets were used for the first time in Hindi Film music is not traced but Music Directors of the 50s Naushad, S D Burman had used them in their songs in the 50s. The earliest song I discovered was "Lara Loo Lara Loo" and "Lo Pyar ki ho Gayi jeet" from the 1951 film Jadoo starring Nalini Jaywant and Suresh, The music was given by Naushad.
We all know O P Nayyar was the King of Rhythm, he used this instrument beautifully in the song " Aye Dil Hai Mushkil Jeena Yahan" from C I D in 1956 then "Aaiyee Meherban" from Howrah Bridge(1958)
Another song from Kashmir ki kali, once again O P Nayyar used this instrument wonderfully, the song is " Yeh Chand Sa Roshan Chehra"
Castanets may be called ‘side percussion, but their rhythm in songs and creative use of Castanets by many composers of the Golden Era made many Bollywood songs a lively and delightful treat for the ears.R D Burman also used Castanets extensively in his debut movie Chote Nawab in the delightful Matwali Ankhon wale.
While there are a number of songs that use Castanets but in this blog, I am posting only those songs where the sound of Castanets is prominent.

Posted by /bolywoodfiles.blogspot.com at 10:29:00 No comments: