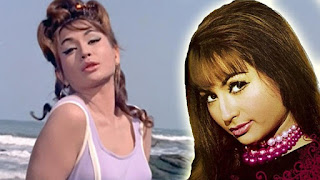 Started her career as a Chorus Dancer Helen became the first Dancing Diva of Bollywood. It was the dance song Mera Naam Chin Chin Chu from the film Howrah Bridge in 1958 made her the Cabaret Queen of Bollywood. She changed the entire scenario of dance in Hindi cinema from the early 50s to the late 70s to emerge many years later as a character actress in a few chosen films.
She was born in Burma (21 Nov), now Myanmar, to a Burmese mother and Anglo-Indian father. The famous dancing star Cuckoo was a family friend. She introduced her as a dancer in the chorus in Shabista in 1951.  She got  her first hit song-and-dance number in Baarish (1957), Mr John, Baba Khan ya Lala Roshandaan Jo Bhi Dekhe Mera Jalwa Ho Jaaye Qurbaan. 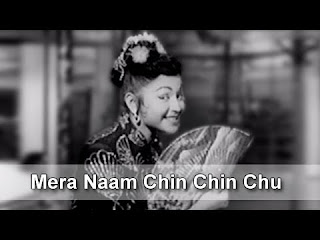 She was initially trained in the Manipuri style. Then she learnt Bharat Natyam from P.L. Raj, one of the leading choreographers of the time. Kathak followed this. She was the one who introduced the cabaret and the belly dance in Indian films.
Helen vamped three generations of men, Prithviraj Kapoor (Harishchandra Taramati), Raj Kapoor (Anari (1959)) and Rishi Kapoor (Phool Khile Hain Gulshan Gulshan (1977)).
Hindi cinema found many uses for Helen. Since she was an outsider in almost every sense – by name, by national origin, by heredity – she could be anyone. And so a million fantasies were pinned on to one single form. She could be an Italian countess (Prince (1969)) or a German one (Ek Se Badhkar Ek (1976)) or an Anglo-Indian gold-digger (Gumnaam (1965)) or a tribal (Baadal) or an aboriginal Maharashtrian Koli fisherwoman (Inkaar (1977)) or a Chinese woman (Howrah Bridge (1958)) or a Roman Catholic Jenny (Imaan Dharam (1977)). 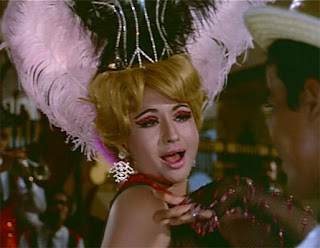 She was nominated for the Filmfare Best Supporting Actress Award in 1965 for her role in Gumnaam. She played dramatic roles such as the rape victim in Shakti Samanta's Pagla Kahin Ka (1970).It was  a role in Mahesh Bhatt's film Lahu Ke Do Rang (1979), for which she won a Filmfare Best Supporting Actress Award. In 1999 Helen was given India's Filmfare lifetime achievement award.
Helen officially retired from movies in 1983, but she has since then appeared in a few guest roles such as Khamoshi: The Musical (1996) and Mohabbatein (2000). She also made a special appearance as the mother of real-life step-son Salman Khan's character in Hum Dil De Chuke Sanam.. She also appeared in Humko Deewana Kar Gaye in 2006.

Helen was selected for the Padma Shri awards of 2009 along with Aishwarya Rai and Akshay Kumar.
Song of Baarish 1957

Posted by /bolywoodfiles.blogspot.com at 12:20:00 No comments: