Sunil Dutt-Much More Than an Actor 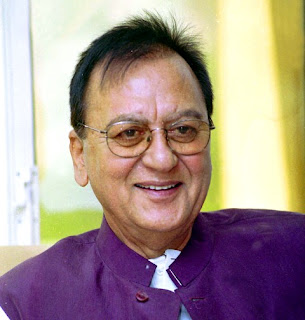 Life for him was one crisis after the other — his early struggles as an actor, bankruptcy as a producer, the death of Nargis, his wife, battle against son Sanjay’s drug addiction and, later, TADA arrest.He bounced back time and again from personal tragedies which would have pulled down a lesser man. In public life, Dutt  symbolises the never-say-die spirit.
With an ear to the ground and a hand on the pulse of the people, Sunil Dutt lived by his convictions and led from the front.He  arrived in Bombay at the age of 18 with two pairs of clothes and Rs 25 in his pocket, determined to bring back the good times for his family which had lost everything during Partition. Holding a clerical job with the Bombay Bus Service and sharing a room with six others, which often necessitated sleeping out, Dutt studied in Jai Hind College and made some extra money by anchoring cultural shows. He interviewed film stars over Radio Ceylon. His good looks and deep voice prompted producer Ramesh Saigal to offer him the hero’s role in the film Railway Platform.
The turning point came in 1956 when producer Mehboob Khan signed him to play the son of leading lady Nargis in Mother India. For Nargis, it was the role of a lifetime.As we all know that he rescued his leading lady from a fire in the sets, they discovered they were in love and got married. Three children followed. 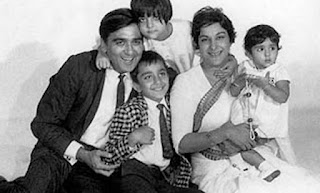 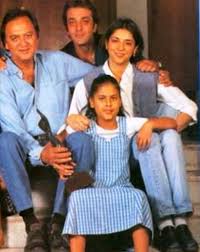 He was one of the major stars of Hindi cinema in the late 1950s and 1960s and continued to star in many successful films which included Sadhna (1958), Sujata (1959), Mujhe Jeene Do (1963), Khandan (1965) and Padosan (1967). His collaboration with B.R. Chopra proved to be successful in films such as Gumraah (1963), Waqt (1965) and Hamraaz (1967).
He admired Jawaharlal Nehru, who had suggested that the film industry should do something for the jawans. Dutt and Nargis formed the Ajanta Arts Cultural Troupe and, roping in leading actors and singers from the film industry, held stage shows at border areas.The Dutts donated Rs 1 lakh to the National Defence Fund and grew closer to the Nehru family. Nehru enjoyed watching Sujata, which dealt with untouchability. The Dutts bonded well with Indira Gandhi too. Nargis was nominated to the Rajya Sabha in 1980, and was urged by Indira to take up the cause of spastic children. The former actress became the chairperson of the Spastics Society of India. 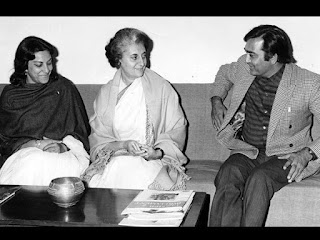 He was appointed the Sheriff of Bombay in 1981, Dutt was persuaded by the Gandhi family to enter politics and contest the Lok Sabha elections from Bombay Northwest. His reputation and clean image helped him win successive Lok Sabha elections, defeating formidable opponents like famous criminal lawyer Ram Jethmalani and Shiv Sena stalwarts such as Madhukar Sarpotdar.
In 1982, he set up the Nargis Dutt Memorial Cancer Foundation in New York which began to collect funds for cancer equipment in Mumbai’s Tata Memorial Hospital. In 1984 he was elected on a Congress ticket from Mumbai North-west to the 8th Lok Sabha.

Thereafter, barring one election, he contested from the same constituency and won convincingly, Shocked by the violence in Punjab, Dutt turned into a padyatri with no political agenda. During his 76-day, 2500-km walk from Bombay to the Golden Temple in Amritsar in 1987, Dutt overcame terrible heat, a bout of jaundice and blistered feet to address more than 500 roadside meetings. He stressed that violence would not help any cause. The police warned him that he was a target for terrorists but he shunned security and marched to the Golden Temple, where he was accorded a rousing reception.
The padyatra was repeated some time later, when protesting against the proliferation of nuclear weapons, Dutt Saab marched from Hiroshima to Nagasaki, demanding a ban on nukes. "Did God create the world for it to be destroyed by his own children?" he asked. "Each one of us should do our bit to fight nuclear proliferation.
Sunil Dutt was a recipient of numerous awards, including the Padmashree in 1968, the Maulana Abul Kalam Azad Award for National Integration and Communal Harmony in 1997, the Khan Abdul Gaffar Khan Award for International Peace, Communal Harmony, Unity and National Integration in 1997 and the Rajiv Gandhi National Sadbhavana Award in 1998.
In Congress politics, even while keeping away from different groups, he remained a trusted aide of Sonia Gandhi and was among the first ones to receive a ticket for the Lok Sabha poll. 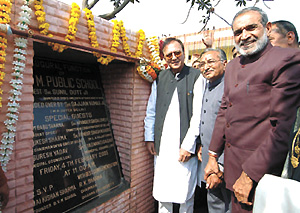 Dutt’s popularity cuts across party lines. He is equally at home with people from all sections of society, be they slum dwellers, glamorous film stars, professionals, Rotarians or the Page-three crowd. His appointment as Minister for Youth Affairs and Sports has been well received.He was a minister when he died on 25th May 2005 at his residence in Bandra, Mumbai.
Songs from Sunil Dutt's Films
Song from Mother India (1957)

Posted by /bolywoodfiles.blogspot.com at 10:35:00 No comments:

The Heritage Site used in a Bollywood Song 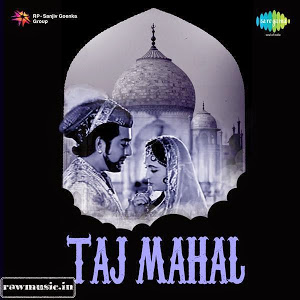 As a Film and music lover and listening to music then analysing its nuances is an important part of my day-to-day life.This time an idea came to my mind to search for the songs which were picturised on a heritage location.
India has about 35 such sites which are recognised by UNESCO as the world heritage sites/monuments. Including man made and natural ones.These heritage sites have been popular with Indian filmmakers. They have included these sites in various films by picturising songs or scenes in and around the known and not so known heritage sites. The first song comes in my mind is Dil ka bhanwar kare pukar picturised so beautifully on Nutan and Dev Anand inside Qutab Minar.It remains the only song shot inside Qutab Minar.Another beautiful song which is picturised in the premises of the Qutab complex.is  from Fanaa (2005).

Taj Mahal is among the 7 wonders It is the no 1 heritage site of India. Many songs were picturised at this location.

Here is one such song from “Leader” (1964). This song is sung by Rafi and Lata and it is picturised on Dilip Kumar and Vyjyanti Mala. The picturisation shows Tajmahal in its glorious splendour.

Do  Dil Mil Rahe Hain the beautiful song from Pardes was picturised beautifully at Fatehpur Sikri We can see the lovely architecture in this song picturised on Shah Rukh Khan.

Humayun's Tomb-Humayun’s Tomb (tomb of the Mughal Emperor Humayun), located at Nizamuddin in Delhi, is a popular tourist as well as filming location. In the film Kurbaan 2009 the song"Shukra Allah" was picturised at this beautiful location.

. Temples of Mahabalipuram (Mamallapuram) – Built in 700 – 728 AD by the Pallava Dynasty, they are also known as the 7 Pagodas. The temples are monolithic – carved out of one huge boulder. Here’s a romantic song picturised on the beautiful Sadhna and the flamboyant Shammi Kapoor from Rajkumar (1964)

Martand Sun Temple-a Kashmiri Hindu temple dedicated to Surya built during the 8th century . Martand is another Sanskrit name for Sun. Now in ruins, the temple is located five miles from Anantnag in the  state of Jammu and Kashmir.The Bismil song from Haider was shot here.

Chittorgarh Fort-One of the recent additions to the list of World Heritage Sites in India (2013), this place is famous for its unique Rajput Military Defense Architecture. It includes six majestic forts in Chittorgarh, Kumbhalgarh, Ramthambore fort, Gagron Fort, Amber Fort and Jaisalmer Fort. They’re located on the rocky Aravalli Mountain Range in Rajasthan. The sheer length and expanse of the forts is enough to portray the power and strength of the Rajputana rulers and chieftains. The fortifications of these forts are extremely strong.The song Aaj Fir Jeene Ki Tamanna Hai from Guide 1965 was picturised here.

Nalanda-Nalanda Archaeological Site in Bihar was a center of learning and a buddhist monastery from 3rd century BCE to the 13th century ,the popular song of 70s "Oh Mere Raja" from Johny Mera Naam was shot here.

Ellora Caves-The Ellora Caves are an important UNESCO World Heritage site and an archaeological site, ranging 29 kilometers Northwest of the city of Aurangabad. The Ellora Caves are well known for their Indian-rock cut architecture. There are about 34 rock cut temples and caves which can be dated to about 600 to 1000 AD,These were built by Hindu dynasties, such as the Rashtrakutas and and Yadav dynasty who built some of the Jain group of caves. Geet Gaya Pattharon Ne(1964) has a duet picturised on Rajshree and Jeetendra in Ellora caves.
Song from Geet Gaya Pattharon Ne(1964)

Mandu-an ancient fort city in Madhya Pradesh. It is located in the Malwaregion of western Madhya Pradesh, India, at 35 km from the Dhar city. In the 11th century, Mandu was the sub division of the Tarangagadh or Taranga kingdom .The song "Naam Gum Jayega " from the film Kinara 1977 was shot here.

Saint Augustine Church Goa-The 15th and 16th centuries mark the coming of the Portugese to India and they established themselves at Goa, along the Konkan coast in the South-western part of India. And the advent of the Portugese marks the introduction of Christianity in the Indian subcontinent. Hence, several churches and convents were built in Goa, as a way of evangelization. Due to their different, yet beautiful architectural forms, these churches have been included in the list of UNESCO World Heritage Sites in India.The famous song "Gumnam Hai Koi" from Gumnam  was shot at the ruins of St. Augustine in Old Goa.

Red Fort Delhi- Red Fort is named for its massive enclosing walls of red sandstone,Constructed in 1639 by the fifth Mughal Emperor Shah Jahan as the palace of his fortified capital Shahjahanabad earlier name of Delhi.There was a film in 1960 Lal Quila which was picturised here

Hampi-a village and temple town recognised as a UNESCO World Heritage Site, listed as the Group of Monuments at Hampi. in northern Karnataka, India. It is located within the ruins of the city of Vijayanagara, the former capital of the Vijayanagara

Chattrapati Shivaji Terminus(BombayVT Rly Station)-formerly known as the Victoria Terminus is the headquarters of Central Railway in Mumbai. It was built by Frederick William Stevens with the inspiration from Victorian Italianate Gothic Revival architecture and traditional Mughal buildings between the years 1878-1888, and gave Bombay the face of being the International Mercantile Port of India.

Song from Song from Aradhana 1969

Song from Song from Parineeta 2006

Posted by /bolywoodfiles.blogspot.com at 10:21:00 No comments: