G P Sippy- A carpet merchant to the maker of Sholay 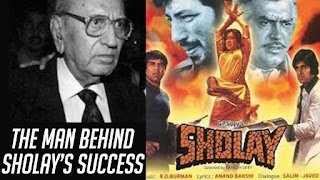 Gopaldas Parmanand Sippy started off as a carpet merchant, turned a construction magnate and then plunged into filmmaking in 1951 with the Dev Anand film Sazaa. In a career spanning over five decades, Sippy had produced 17 films and directed six. In his heydays, he was known as Mr Blockbuster. But Sholay remains his landmark best. 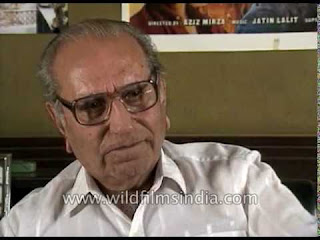 He made Shahenshah in 1953, which was India's first full-length Gevacolor film and India's third full-length colour film. The film was made at a budget of Rs. 3 million and was made in 14 months.. After that, he made 12 O Clock with Guru Dutt and Waheeda Rehman in 1958.
He got the real big success with Mere Sanam (1965). starring Asha Parekh, Biswajeet, Pran, Rajendra Nath and Mumtaz. The film was a hit at the box office, especially because of the musical score by Majrooh Sultanpuri, O.P. Nayyar and the Asha Bhonsle-Mohammed Rafi combination.
In 1968 released his super hit film The film stars Shammi Kapoor, Rajshree, Pran, Mumtaz, Jagdeep, Sachin and Asit Sen. The music was by Shankar Jaikishan. The film became a box office hit and won several awards, including Filmfare Best Movie Award
The next year in 1969 his another hit film Bandhan starring Rajesh Khanna and Mumtaz.released.
It received five out of five stars in the Bollywood guide Collections and grossed 2,80,00,000 at the box office in 1969.
The next milestone film was Andaz 1971, it was directed by his son Ramesh Sippy and with this film emerged Salim Javed. Followed this super hit film another super duper hit came to Seeta Aur Geeta in 1972, once again directed by his son Ramesh Sippy and screenplay by Salim Javed.
In 1975 released the magnum opus Sholay all-time hit film. Once again directed by Ramesh Sippy and screenplay by Salim Javed. It was a big budget film Ramesh Sippy said in an interview that he did not have enough money to finance the film at that time and had to depend on his father late GP Sippy for it. He added it was pure luck that he asked for Rs 1 crore and got Rs 3 crore as his dad had just had a hit with Seeta Aur Geeta.
He continued to produced films till Hamesha 1997, in between he gave us films like  Shaan (1980), Saagar (1985), Raju Ban Gaya Gentleman 1992. 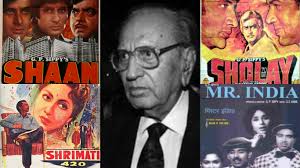 Posted by /bolywoodfiles.blogspot.com at 12:12:00 No comments: Links to this post

70s - The Decade Of Masala Movies 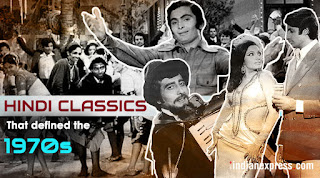 Bollywood has long been synonymous with all-singing, all-dancing, melodrama and masala. Masala means a spice mix of everything from action to romance, drama, comedy, and pathos thrown in one film.In Bollywood every decade has some thing special so the 70's was a decade of Action packed films.This was the decade when Amitabh Bachchan emerged as the King of Bollywood.This was the decade of blockbusters like Sholay, Amar Akbar Anthony, Deewaar,Zanzeer,Don and Yaadon ki Baaraat.
It was a time of some of the most fantastic Stories and Screen plays,over the top costumes (not to mention set design, makeup, art direction, and more), and a cinema that was, in every way, much larger than life. There was loads of action, lots of dhishoom-dhishoom.
The first half of this decade(upto 1974) was about love and Romance but after Zanzeer the action took over the romance.In 1969 after the release of Aradhana Rajesh Khanna emerged as Super star and became the new heart-throb. From1970 to 1972 was his Peak time,he gave one hit after another. In 1973 emerged Amitabh Bachchan with the release of Zanzeer. This year Bobby also released.The film began the phase of Teenage romance which was over shadowed by the action after the release of Deewar and Sholay in 1975.
In this period Indian film industry was introduced by the angry young man The Great Amitabh Bachchan who became a Living Legend. • While Dev Anand , Rajesh khanna,Jitendra and Dharmendra continued to bask in the glory of back to back hits , the actresses were not far behind.Right from the time of,Vyajanti Mala,Nargis,Sharmila Tagore to Hema Malini, Zeenat Aman,Sridevi, Rekha, Smita Patil became the main attraction of Indian film industry.
Dharmendra was another actor who gave many action films in this decade.Mera Gaon Mera Desh (1971),Yaadon Ki Baaraat (1973),Jugnu (1973),Sholay (1975),Charas (1976) and Dharamveer 1978 were few of the hit action films in this decade.
This decade saw the rise of Manmohan Desai who was known for his family-centered, action-song-and-dance films which catered to the tastes of the Indian masses and through which he achieved great success. His movies defined a new genre called masala films. A common theme in his films were the lost and found plot where family members would be separated and reunited. He was one of the directors who had a special working relationship with Amitabh Bachchan, He had a string of hits with Amitabh Bachchan in the 70s and early 80s which helped cement Bachchan's status as a superstar of Indian cinema. He worked with Amitabh on Amar Akbar Anthony, Parvarish, Suhaag, Naseeb, Desh Premee, Coolie, Mard and Ganga Jamuna Saraswati; all but the last were box office successes.
The decade had such stalwarts like Vinod Khanna, Shatrughan Sinha, Manoj Kumar and Shashi Kapoor operating at their peak while Rishi Kapoor and Amol Palekar but this decade was of Amitabh Bachchan who single-handedly bulldozed his way to the top. So final and enduring was his domination that he was dubbed “one man industry.”
Since the masala genre burst onto the scene in the 70s, it has evolved a great deal. The various elements portrayed in a masala film have enthralled audiences from various movie genres. Every age group in India has taken a liking to Masala films, and that’s the reason filmmakers love to get creative with this genre.
The success rate of masala movies has been exceptional. Many movies that belong to this genre have become blockbusters and superhits. This trend continued in 80s and even in 21st century Masala Movies like Dabang, Dhoom and many more like these films rule the Box Office.
While there has been criticism of masala movies being a mishmash of too many genres, the masses in India have enjoyed watching the variety of masala flicks over the years.

Posted by /bolywoodfiles.blogspot.com at 10:53:00 No comments: Links to this post