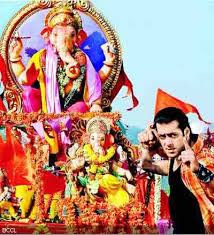 Ganesh Chaturthi is the Birthday of Lord Ganesha.Its an eleven days Celebration,it is one of the few festivals where many households install idol of Lord Ganesh at home, in addition to bigger idols installed in public places. After the end of the festival, all these Ganesh idols are immersed in  sea or in rivers, or ponds. On this auspicious day, devotees chant various religious mantras and songs related to Lord Ganesha Any sort of celebration is not complete without Bollywood tadka. Here we present you Hindi songs to celebrate this Ganesh Festival


He Ganpati Bappa Morya From Pujarin 1969

This is one of the oldest Bollywood song of Ganpati from Pujarin released in 1969,Starring Vijay Dutt and Rehana Sultan, the song is sung like a bhajan with actors playing cymbals and other hand-held musical instruments while worshipping a huge Ganesh idol in the foreground.
Song from Pujarin 1969

Mere man mandir mein tum bhagwaan rahe
This song is sung by Hariharan and chorus. The song is written by Anand Bakshi. Music is composed by R D Burman.

Ganpati Bappaa Morya, Pudhachya Varshi Lavkar Ya
This song is from the 1981 film ‘Saahas’. The lyrics are written by Anjaan and the music composition is by Bhappi Lahiri. The singing voices are of Bhappi Lahiri, Anwar and a chorus of singers. On screen, the song is performed by Bhagwan Dada, Mithun Chakravarty, Jagdeep, and Rati Agnihotri.

Sadda Dil Vi Tu (Ga Ga Ga Ganpati)
A modern Ganpati puja in Punjabi and  peppy beats with the desi feel of a Ganesh Chaturth.Hard Kaur ,the singer infused her rocking rapping essence to the Ganpati Aarti making it modern, without losing any of its devotional quality.

Posted by /bolywoodfiles.blogspot.com at 10:13:00 No comments: