S D Burman - A glimpse of his singing career 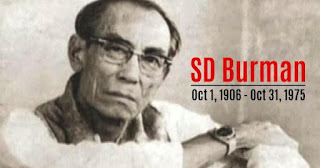 SD Burman started working as a radio singer on Calcutta Radio Station in the late '20s when his work as a singer-composer was based on Bengali folk and light Hindustani classical music. Consequently, his compositions were mainly influenced by his huge repertoire of folk-tunes from present Bangladesh and later other parts of India and around the world. His first record was also released in 1932
Not many of us know that he sang for other music directors also. He made his film debut singing in Yahudi ki Ladki (1933) but the songs were scrapped and re-sung by Pahari Sanyal. Then in 1934, he recorded some songs for the film ‘Seeta’ produced by the East India Film Co., under the music direction of KC Dey but the recording is not available. As early as 1941, he had rendered a song for a Hindi film under the music direction of Madhulal Damodar Master. This song happened to be his debut song for Hindi films.
The song is ‘Prem ki pyaari nishaani’ from TAJ MAHAL (1941). The film was produced under the banner of Mohan Pictures and directed by Nanabhai Vakil. S D Burman has rendered this song in slow tempo emphasising on phonetics of some words in keeping with the mood of the song. The song does not have any musical interlude.

In 1944, Burman moved to Mumbai, at the request of Sasadhar Mukherjee of Filmistan, who asked him to give a score for two Ashok Kumar starrers, Shikari (1946) and Aath Din. Staying close to KL Saigal, KN Singh and Manna Dey in Bombay, he would sing at private get-togethers with friends. And then on their suggestion, the song “Dheere Se Jaana Bagiyan Mein” was recorded and found immense success with the listening public.

Posted by /bolywoodfiles.blogspot.com at 12:37:00 No comments: Links to this post 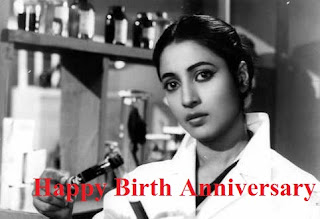 Posted by /bolywoodfiles.blogspot.com at 13:46:00 No comments: Links to this post 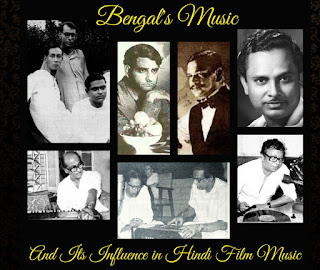 The music of India includes multiple varieties of Indian classical music, folk music, filmi and Indian pop. India's classical music tradition, including Hindustani music and Carnatic,The biggest form of Indian popular music is filmi, or songs from Indian films.
In the early years of Indian cinema, the music was mainly classical and folk in inspiration, with some Western elements. The most fascinating part of Indian film music is its evolution with time. In the mid 30s the influence of Bengali music was started with the film  Dhoop Chhaon. Nitin Bose along with his brother Mukul Bose and music directors RC Boral and Pankaj Mullick introduced play back singing with the song  Man ki aankhein khol  sung by K C Dey, Parul Ghosh and Suprabha Sarkar.

R C Boral and Pankaj Mallick not only introduced Bengali Bhakti Sangeet but also introduced Western orchestration in the interlude music. Another remarkable innovation of RC Boral and Pankaj Mullick was very long instrumental prelude to the main song, for example Ek bangla bane nyara. Its long instrumental prelude is as charming as the song.”
The music of Vidyapati, 1937. was a great hit,Kanan Devi with her typical Bengali lilt became the number one singer-star of New Theatres on par with K L Saigal with the popularity of Vidyapati’s songs. In Dhartimata (1939), Pankaj Mullick composed Duniya rang rangeeli baba, sung by KC Dey, Uma Shashi and K L Saigal. Another remarkable thing about ‘Duniya rang rangili baba’, which you can’t miss is that each antara is in a different tune – might be again the first of its kind.

In Bengali Music the  Rabindra Sangeet is the main along with folk and bhakti.Tagore’s composition was first introduced to Hindi cinema in 1941 by Pankaj Kumar Mullick for the film titled Doctor.K L Saigal was the first non-Bengali singer to sing Rabindra Sangeet. Mullick later used the tune of Kharo vayu vayu meghe in the film Zalzala popular song Pawan Chale Zor.The far reaching influences of the Rabindra Sangeet is apparent on several music directors and not all of them were Bengali.

In the 30s Anil Biswas came to Bombay established himself as a musical force in the film industry.with the success of Jagirdar (1937).He introduced Folk from North East, Boatman’s songs, farmers’ songs, palli geeti, Kirtan, Raag Pradhan compositions to Hindi films.
After Anil Biswas it was S D Burman who used Bengali sangeet in Hindi films.

Inspired by this song of Rabindra Sangeet

Hemant Kumar who was the greatest artist of Rabindra Sangeet.gained popularity in Mumbai as a playback singer.By the mid-1950s, Hemanta had consolidated his position as a prominent singer and composer.The poignant and heart rending Na jaao sainyya chhudake bainyya by Geeta Dutt is inspired from his own Bengali hit Oliro kotha shune bokul haashe although the two songs sound very different in mood.

RD Burman – recreated his creations, often his own records – the best example perhaps is Jete jete pathe holo deri, which Gulzar Saab had booked for himself the moment he heard it first. It turned into Tere bina zindagi se koi (Aandhi, 1975)– both songs are peerless.RD Burman camouflaged his Bengali tunes with such varied orchestration to make it sound different .For instance, notice the use of the typically Bengali instrument the maadol in Tere bina jiya jaaye na(Ghar, 1978), or the distinctly Bhakti sangeet beginning to a rocking fun song Kal kya hoga kisko pata (Kasme Vaade, 1978), in which Bhagwan Dada made a guest appearance complete with an ektara!
Jete jete pathe holo deri, by R D Burman

Bappi Lahiri – the softer compositions of Zakhmee (1975), Toote Khilone (1978) or Lahu Ke Do Rang (1979) are more in line with the Bengal genre of music.
The music of the Basu Chatterji film Apne Paraye (1980), based on a story by Sarat Chandra Chatterjee gave Bappi Lahiri an ideal opportunity to experiment with Bengal’s Bhaktigeeti and kirtan once more.
Rajesh Roshan was very much influenced by Rabindra Sangeet many of his songs were inspired by Bengali Music.One of his great songs Chhokar Mere Mann Ko from Yaarana was inspired by this song Tomar holo shuru, amar holo shara.

In the present Century of Indi Pop or Bhangra Music we can sometime hear  beautiful melody from Bengal."Piyu bole" from Pareenita 2005 is one such composition from Shantanu Moitra.And thus Bengal’s music continues to leave its lyrical and melodious stamp in Hindi film music…
Posted by /bolywoodfiles.blogspot.com at 10:32:00 No comments: Links to this post