The Great Thumris of Bollywood 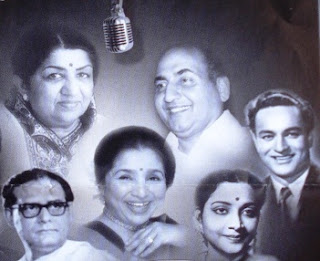 Thumri is a com­mon style of light classical music.  The text is romantic and devotional in nature, and us­ually revolves around a girl's love for Krishna.  The language is a dialect of Hindi called Brij bhasha. It arose in pop­ular­ity du­ring the 19th cen­tury. It was made popular among the common people by Hindi films.
Thumris have been used in films right from the very early days of talkies. Rajkumari had sung a number of Thumris in the 30s. K L Saigal had sung a popular thumri, piya bina nahi aawat, way back in 1935, in Devdas. And who can forget, Saigal’s Baabul Mora Naihar, in 1938 movie Street Singer.
Thumri is basically sung in a slow tempo, later a fast version of Thumri emerged called Lucknowi Thumri and another form Punjabi Thumri also emerged in Hindi films. There were many songs and singers in the 40s and 50s where Thumri became popular.
One name that truly epitomizes the Hindustani classical music of the 20thcentury is that of Ustad Bade Ghulam Ali Khan. Often touted as Tansen of the 20thcentury, this musical genius blended the best of classical music and created a unique style of his own. Some of the famous Thumri are ‘Yaad Piya Ki Aaye’, ‘Aaye Na Balam’ and ‘Prem Ke Phande Men’.
Begum Akhtar was another great singer who was known as the Queen of Ghazal but was also a great Thumri performer.
Here I am giving a few of the Thumris from the Hindi films:


Posted by /bolywoodfiles.blogspot.com at 14:40:00 No comments: Links to this post

Begum Akhtar - The soulful voice that sung Ghalib and Khusroo. 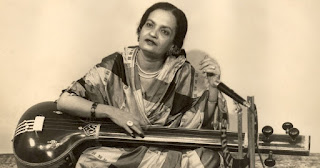 Akhtaribai popularly known as Begum Akhtar was born on 7th Oct 1914 at  Bada Darwaza, Town Bhadarsa, Bharatkund, District Faizabad U P.She showed interest in music at a very young age and was sent to train under the great sarangi player, Ustad Imdad Khan. Later, she learnt classical music from great exponents of this field like Mohammad Khan, Abdul Waheed Khan and Ustad Jhande Khan Saheb.
Her first public performance was at the age of fifteen.  Her first recording was done by the Megaphone Record Company at the age of Fifteen. The famous poet Sarojini Naidu appreciated her singing during a concert which was organised in the aid of victims of the 1934 Nepal–Bihar earthquake. This encouraged her to continue singing ghazals with more enthusiasm.
Begum Akhtar was very beautiful and her sensitive voice made her an ideal candidate for a film career in her early years. Those days only those actors were chosen who can sing also. Begum Akhtar was also approached by many people from Bombay to work in films. So she acted in a few Hindi films She was signed by East India Film Company as a singing actor. Her first film was East India Film Company’s ‘Ek Din Ka Baadshah’ (1933). This was followed by ‘Nal Damyanti’ (1933), ‘Mumtaz Begum’ (1934), ‘Roop Kumari’ (1934), ‘Ameena’ (1934), ‘Jawani Ka Nasha’ (1935), ‘Naseeb Ka Chakkar’ (1936) etc.. In all these films, she sang all her songs herself.
After staying at Bombay for a few years she came back to Lucknow, where she was approached by the famous producer-director Mehboob Khan, to act in Roti which was released in 1942 and whose music was composed by the maestro Anil Biswas.
In 1945, Akhtari Bai married a Lucknow-based barrister, Ishtiaq Ahmed Abbasi, and became known as Begum Akhtar. However, after marriage, due to her husband's restrictions, she could not sing for almost five years. In 1949 she returned back to the recording studios.She became a regular singer in Akashvani Lucknow Radio station.
Begum Akhtar was persuaded by Madan Mohan, a famous music director to sing in two movies "Daana Paani" (1953) and "Ehsaan" (1954). The songs "Aye Ishq Mujhe Aur to Kuch Yaad" and "Hamein Dil Mein Basa Bhi Lo" were absolutely melodious and were liked by one and all. Her last movie stint was that of a classical singer in Satyajit Ray's film "Jalsa Ghar". Begum Akhtar was a refined Ghazal singer and was called as Mallika-e-Ghazal or the Queen of Ghazals.
She received the Sangeet Natak Akademi Award for vocal music and was awarded Padma Shri and Padma Bhushan(posthumously) by Govt. of India. She was given the title of Mallika-e-Ghazal (Queen of Ghazals).

Begum Akhtar performed last in a concert in Ahmedabad. That day she felt that her voice was not up to the mark and raised her pitch. This put much stress on her and her health deteriorated. The situation became critical and she had to be rushed to the hospital. She breathed her last on 30th October 1974, leaving many fans disappointed and heartbroken

Posted by /bolywoodfiles.blogspot.com at 10:38:00 No comments: Links to this post