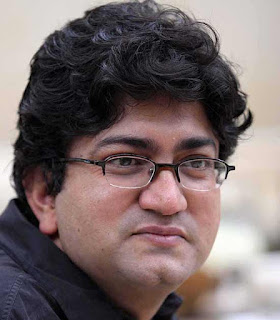 Prasoon Joshi (born 16 September 1971) is a renowned Indian lyricist, screenwriter and Ad-guru..
A house -hold name in the country, Prasoon is deeply respected for his major contribution in shaping the Popular Culture and public consciousness in India through his work and content creation across the fields of Advertising, Poetry, Songwriting and Cinema.
An Advertising and communication icon who's built Mega brands, a writer who's been honored with the prestigious National Award twice by the President of India, garnered glory at International Awards like Cannes, D&Ad, Clio, Media, Adfest, and plethora of others, he’s authored 4 books as well, his first at the age of 17.

Chand Sifarish from Fanaa
He made his debut as film lyricist with Rajkumar Santoshi's Lajja, a critical and commercial success, and this soon led to Yash Chopra's Hum Tum and a string of highly successful Bollywood films like Fanaa, Rang De Basanti, Taare Zameen Par, Black and Delhi 6. With Rang De Basanti (2006), he also became a dialogue writer.

Prasoon Joshi also wrote for Private Albums such as

Ab Ke Saawan
He has received Padma Shri in 2015, Filmfare Best Lyricist Award three times, twice consecutively: in 2007 and 2008 and again in 2014 for Hindi movie Bhaag Milkha Bhaag. Prasoon has also received the National Film Award for Best Lyrics twice, once for his work in Taare Zameen Par (2007), and Chittagong (2013).He was awarded Padma Shri, the fourth highest civilian award of India, in 2015
Prasoon met his wife Aparna, also an advertising professional, while working at O&M Delhi.They have been married for over a decade and have a daughter named Aishaanya.

SOME OF THE MOST POPULAR SONGS OF PRASOON JOSHI

Posted by /bolywoodfiles.blogspot.com at 09:15:00 No comments: