The title “Padosan”  brings a smile to every face. Produced by Mahmood and N.C. Sippy, the film is one of the best entertainers of all times. The film that immortalises Kishore Kumar and Mehmood as master entertainers. The film is also known for the behind-the-scenes rivalry in the song, “Ek Chatur Naar”, between Manna Dey and Kishore Kumar. The film was released on 29 th Nov 1968 and was a super hit. It is among the Top 50 classics of Hindi Cinema.
The film was based on a Bengali story, ‘Pasher bari' (next-door neighbour) written by Arun Chowdhury and adapted in Bengali in 1952, in Telugu as “Pakkinti Ammayi” in 1953, in Tamil as “Adutta Veetu Penn” in 1960 and again in Telugu as “Pakkinti Ammayi” in 1981.
The film was  Directed by Jyoti Swaroop. The movie stars Sunil Dutt and Saira Banu in lead roles. Kishore Kumar, Mukri, Raj Kishore and Keshto Mukherjee played the supporting roles. Mehmood as the South Indian musician and rival to Sunil Dutt is among the highlights of the film. It was considered one of the best comedy movies made in Hindi film history. Mehmood's portrayal of a south Indian music teacher was one of his noted performances and a key highlight of the film. Kishore Kumar's character of a comical theatre director was also well received.
The music of the film was composed by Rahul Dev Burman and the lyrics were written by Rajendra Krishan.R.D. Burman's hit music gave us all-time great songs like “Mere Samne Wali Khidki Mein” (Kishore Kumar) and “Ek Chatur Naar Karke Singaar” (Manna Dey and Kishore Kumar) not to forget “Main Chali Main Chali”, “Sharm Aati Hai Magar”, “Bhai Batur” (all Lata Mangeshkar), “Bindu Re Bindu” and “Kahna Hai Tumse Ye Pahli Baar” (both Kishore Kumar). 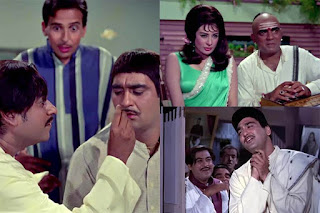 Padosan is a story of a simpleton named Bhola (Sunil Dutt) who falls in love with his neighbour Bindu (Saira Banu). To impress her he wants to sing to her. However, he isn't a good singer and so seeks the help of his friend, Guru (Kishore Kumar). Guru, a famous singer, agrees to help his friend.To impress Bindu, Guru sings in the background and Bhola mouths the words. Bindu is charmed by what she thinks is Bhola's singing. They become friends and fall in love. Bindu has a music teacher named Master Pillai/Masterji (Mehmood) who is also in love with her and keeps proposing to her. Bindu loves Bhola and hence refuses Masterji. One day Bindu finds out about Bhola's lie. She decides to marry Masterji instead. Bhola thinks of a way to get Bindu back. So on the wedding day, Guru gets an idea. He makes Bhola pretend to have committed suicide.
Guru goes and tells the news to Bindu. She is shocked. She leaves her wedding altar and runs to Bhola. She reads the note and starts to repent. Bindu then tries to wake Bhola up. Bhola wakes up and Bindu is delighted. She tells Masterji that she wants to marry Bhola and he agrees. Bhola and Bindu get married.
With brilliant performances and enduring songs, “Padosan” can be watched any number of times. 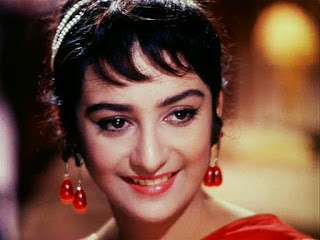 Saira Banu (born August 23, 1944) is the daughter of Naseem Banu, a well-known actress of the 1930's and 1940's and the grand daughter of the famous playback singer of the yesteryears Shamshad Begum. She is also the wife of actor Dilip Kumar. 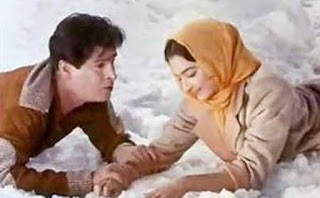 Saira Banu made her acting debut at 17 years opposite Shammi Kapoor in the 1961 film Junglee for which she earned her first Filmfare nomination as Best Actress. The famous song from this movie "Yaahoo!! Chahe Koi Mujhe Junglee Kahe" sung by Mohammed Rafi was a big success.

Her next film was Shadi(1962) opposite Dharmendra, She did one more film opposite Shammi Kapoor named -Bluff Master directed by Manmohan Desai. 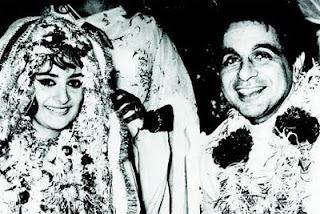 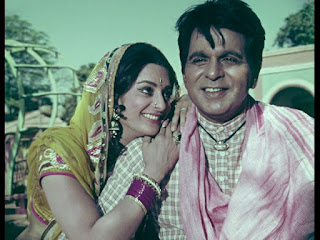 She married Dilip Kumar on October 11,1966. He was 44 and she was barely 22. Many eyebrows were raised and people were quick to forecast a failed marriage. How-ever, 50 years and the two have stuck by each other through thick and thin. And when the veteran actor was recently taken ill, Saira stood by him like a rock. 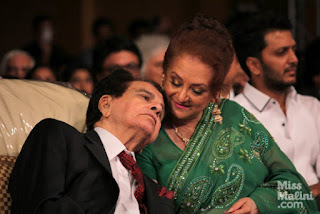 After her mairrage in 1966, her first film to release was Aman opposite Rajendra Kumar and she continued to act as the lead heroine till 1977. But it is said that the turning point of her career was the comedy and love story Padosan in 1968 opposite Sunil Dutt, which brought her to the top league of the successful actresses and she started receiving more offers.

She established herself as versatile actor, post her marriage, with her performances in Padosan, Victoria 203, Jhuk Gaya Aasman, Sagina, Chaitali - with each of them belonging to different genres.She got three  Filmfare nominations as Best Actress for Shagird (1967), Diwana (1968), and Sagina (1974).

She was paired with all the heroes of that time ,with Dharmendra she did Jwar Bhata, Aadmi Aur Insaan, Resham Ki Dori, Pocket Maar, International Crook, and Chaitali.She also did 'Pyar Mohabbat' with Dev Anand and did two films with Manoj Kumar, namely 'Poorab Aur Paschim' and 'Balidan'.

Her pairing with Sunil Dutt after Padosan continued to be good at box office with films like Nehle Pe Dehla being successful in 1976. The song Sawan Ka Mahina Aagaya became very popular in 1976.
She did 2 films with Amitabh Bachhan Zameer (1974) and Hera Pheri(1976) directed by Prakash Mehra and starring Amitabh Bachchan, Saira Banu, Vinod Khanna,Sulakshana Pandit, Shreeram Lagoo and Asrani. The film's music is by Kalyanji Anandji and the lyrics by Anjaan.This movie was a 'superhit' at the box office.

Her last film Faisla where she was cast opposite Vinod Mehra which was completed in 1976 released in 1988.

Nainon Me Darpan from Aarop

Thoda Sa Thero from Victoria No 203