DEV ANAND and His Heroines 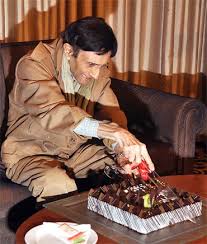 I believe that Dev Anand is probably the only Hero or one of the very few Actors who have
acted with all the leading actresses of his time starting from the late 40's to the 90s.Rekha was the only Actress with whom Dev Anand has not Co starred. 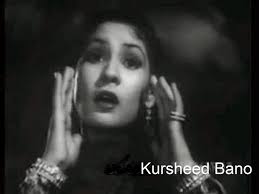 he was the second heroine of Dev Anand,Both of them came together in Ziddi 1948,This film launched the career of Dev Anand as the lead hero. The film helped establish its stars Dev Anand, Kamini Kaushal and Pran in Hindi films. The playback singers - Kishore Kumar and Lata Mangeshkar recorded their first duet - "Ye Kaun Aya Re" together in this 1948 film Ziddi.Both of them worked together in 2 films.The other film was Namoona released in 1949 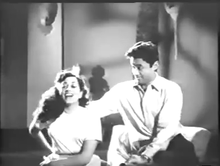 Song from Vidya 1948
She was the most popular singing star of the Indian sub-continent of her generation.  From 1948 to 1951, she became the singing superstar of Bollywood, earning more for her performances than all the performing actors of the times, male or female, including Dev Anand, Raj Kapoor, Dilip Kumar, Nargis and Madhubala. She received 1.5–2 lakhs rupees for her role per film, when top male actors were getting 50 thousand to 1 lakh Rs.
Still from Sanam 1951
In the late 1940s, she worked with Dev Anand. While shooting the film Vidya (1948), she became romantically involved with him. The two of them were paired in seven films together; Vidya (1948), Jeet (1949), Shair (1949), Afsar (1950), Nili (1950), Do Sitare (1951) and Sanam(1951), all of which were successful at the box office.

Song from Kala Pani 1958
She is also considered to be one of the most beautiful actresses to have worked in the industry, and is highly regarded as "The Venus of Indian Cinema" She received wide recognition for her performances in films such as Mahal (1949), Amar (1954), Mr. & Mrs. '55 (1955), Chalti Ka Naam Gaadi (1958), Mughal-e-Azam (1960) and Barsaat Ki Raat (1960). She was co starred with Dev Anand in 8 films.Their first film was Niraala released in 1950,The most popular movies of Madhubala and Dev Anand are Kala Pani, Armaan, Jaali Note

Song from Birha Ki Raat 1950
Regarded as one of the greatest actresses in the history of Hindi cinema, she made her screen debut as a child in Talash-E-Haq in 1935, but her acting career began in 1942 with Tamanna (1942). During a career that spanned from the 1940s to the 1960s, Nargis appeared in numerous commercially successful as well as critically appreciated films, many of which featured her alongside actor Raj Kapoor. Both of them worked together in 2 films,Both the films Birha Ki Raat and Khel released in 1950,After that they have not worked together 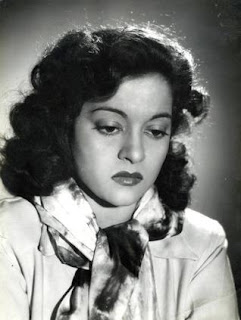 Song from Munimji 1955
In 1950, she garnered fame when she became a top star with her performances opposite Ashok Kumar in Samadhi and Sangram. Nalini remained an important leading actress through the mid-1950s, appearing in such films as Rahi (1953), Shikast (1953), Railway Platform (1955)), Nastik (1954), Munimji (1955), and Hum Sab Chor Hain (1956). The 1958 film, Kala Pani, directed by Raj Khosla, was Nalini's last successful movie, for which she won the Filmfare Best Supporting Actress Award. Dev Anand and Nalini Jaywant have worked jointly in 3 movies.The most popular movies of Dev Anand and Nalini Jaywant are Munimji and Kala Pani .Their first film was Rahi released in 1953 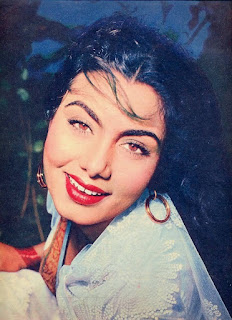 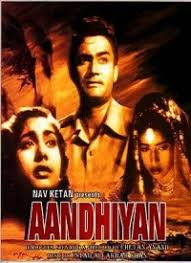 She gained popularity playing spirited village belle type characters, but has appeared in diverse genres such as fantasy and social films.She came into prominence from Barsat 1949,The film's popular title song Barsaat mein hum se mile tum as well as three other ever-green classics, Jeeya bekarar hai and Patli kamar hai were all picturised on Nimmi. She and Dev Anand worked together in 2 films,Sazaa 1951 and Aandhiyan 1952

Song from Baazi 1950
She was considered one of the more spontaneous and expressive stars of Bollywood in her acting.She made her debut as a heroine in Badnaami (1946).Before that she was a Child Actor.She  became a star in the 1950s with Baazi and Bawre Nain with Raj Kapoor.Geeta Bali and Dev Anand have worked jointly in 6 movies.The most popular movies of Geeta Bali and Dev Anand are Pocket Maar, Milap, Baazi . 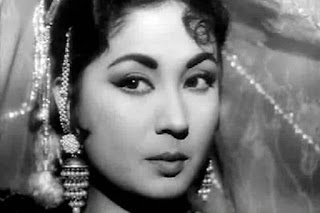 Song from Kinare Kinare 1963
Meena Kumari made waves as an actor beyond compare in the 60s, Kumari got the author-backed roles and her male co-stars were said to be wary of starring opposite her.[7] During a career spanning 33 years from her childhood to her death, she starred in about 92 films of a variety of genres, many of which have achieved classic and cult status today, such as Sahib Bibi Aur Ghulam, Pakeezah, Mere Apne, Aarti, Baiju Bawra, Parineeta, Dil Apna Aur Preet Parai, Foot Path, Char Dil Char Rahen, Daera, Azaad, Miss Mary, Sharada, Dil Ek Mandir, Kaajal, Chirag Kahan Roshni Kahan, Majhli Didi, Phool Aur Patthar, Bhabhi Ki Chudiyan, Yahudi, Halaku, Baadbaan and Kohinoor.
She did 4 films opposite Dev Anand. Baadbaan,Kinare Kinare and Sanam were prominent among them 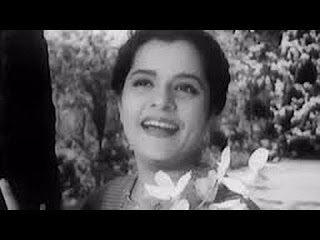 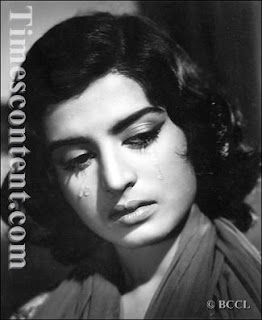 Song from Taxi Driver 1954
She was introduced to films by Chetan Anand of Navketan Films with the film Baazi in 1951. She co-starred with Dev Anand, whom she worked with in all her subsequent films. Her screen name - Kalpana Kartik - was given to her by Chetan Anand during this period. Baazi was Navketan's first super-success and also the film on whose sets Dev Anand secretly married Kalpana Kartik during a lunch break. Both of them starred together in  6 films,all the films were hit.,most popular were Taxi Driver,Nau Do Gyaarah and House No 44 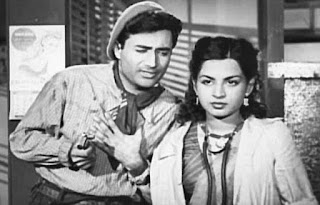 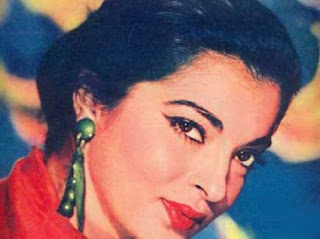 Song from Funtoosh 1956
She  was introduced into Bollywood by the film-maker Chetan Anand. She is known for her role in the movie Taxi Driver.She was the Heroine of Funtoosh 1956 opposite Dev Anand.Some of her memorable films were Teen Batti Char Raasta (1953) and Railway Platform 1955 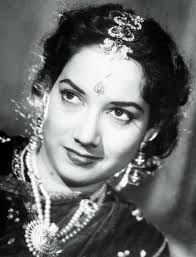 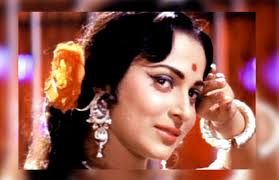 Song from Guide 1965
She is noted for her contributions to different genres of films from the 1950s, 1960s and early 1970s. She has received a Centenary Award for Indian Film Personality, a Filmfare Lifetime Achievement Award, a National Film Award for Best Actress and two Filmfare Awards for Best Actress throughout her career. Her first appearance in a Hindi film was in CID (1956). Later, she was seen in a series of successful films including Pyaasa (1957), 12 O'Clock (1958), Kaagaz Ke Phool (1959), Sahib Bibi Aur Ghulam and Chaudhvin Ka Chand (1961). Her other notable works include Solva Saal (1958), Baat Ek Raat Ki (1962), Kohra (1964), Bees Sal Baad (1962), Guide (1965), Teesri Kasam, Mujhe Jeene Do (1966), Neel Kamal and Khamoshi (1969).
Waheeda Rehman and Dev Anand have worked jointly in 7 movies.The most popular movies of Waheeda Rehman and Dev Anand are Guide, Baat Ek Raat Ki, Kala Bazar, Solva Saal ... 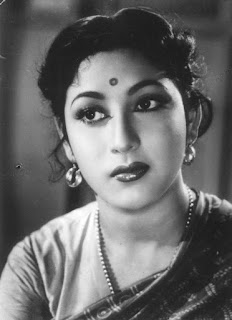 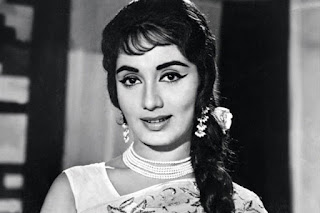 Song from Hum Dono 1961
She was one of the top actresses in 1960s, a period regarded as Bollywood's "golden era". She Was The Highest paid actress of her time.Her fringe haircut became popular during the 1960s and came to be known as "Sadhana cut"She paired with  Dev Anand with 3 films but one film was shelved.The other two Hum Dono 1961 and Asli Naqli 1962 were hits 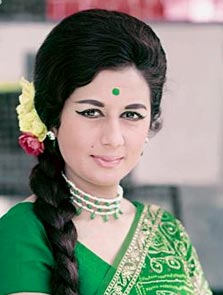 Song from Teen Deviyan 1965
Her career spans over 30 years and she is best known for her performances in Ittefaq, Gumnaam, Kanoon, Jab Jab Phool Khile, Chhoti Bahen, The Train, Hum Dono ,Shor and Prem Rog.She played supporting roles to stars like Dev Anand in Kala Bazar,later she did Hum Dono in 1961. she was among one of the Teen  Deviyan of Dev Anand in that film. 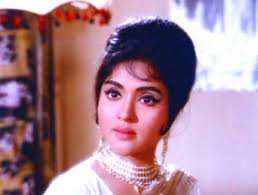 Song from Jewel Thief 1967
Vyjayanthimala was one of the biggest Bollywood stars with a career lasting almost two decades. She was the first South Indian actress to become a national star and "paved a way" for other south Indian actresses to foray into Bollywood.Following the success of Nagin, Vyjayanthimala established herself as one of Bollywood's leading actresses while making inroads in successful Tamil and Telugu films.Vyjayanthimala appeared in Devdas, playing Chandramukhi, the hooker with a heart of gold, in 1955. In her first dramatic role, she received her first Filmfare Award for Best Supporting Actress at the 4th Filmfare Awards, where she refused to accept.Vyjayanthimala and Dev Anand have worked jointly in 3 movies.The most popular movies of Vyjayanthimala and Dev Anand are Amardeep and Jewel Thief . 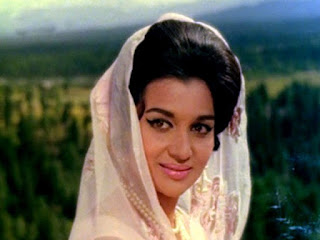 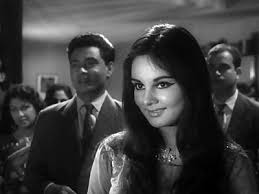 Song from Teen Devian 1965
She appeared with Shammi Kapoor in the 1962 film Professor, with Shashi Kapoor and Kishore Kumar in Pyar Kiye Jaa (1966), with Dev Anand in Teen Devian, 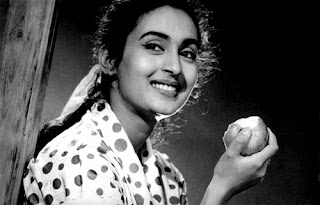 Song from Tere Ghar Ke Samne 1963
She appeared in more than 70 Hindi films in a career spanning nearly four decades. Regarded as one of the finest female actors in the history of Hindi cinema,The daughter of filmmaker Kumarsen Samarth and film actress Shobhna Samarth, Nutan started her career at the age of 14 in the 1950 film Hamari Beti, directed by her mother. She subsequently starred in such films as Nagina and Humlog (both 1951). Her role in Seema (1955) garnered her wider recognition and a Filmfare Award for Best Actress. She continued playing leading roles through the 1960s until the late 1970s and went on to win the award on four other occasions for her roles in Sujata (1959), Bandini (1963), Milan (1967) and Main Tulsi Tere Aangan Ki (1978). Some of her other films of this period include Anari (1959), Chhalia (1960), Tere Ghar Ke Saamne (1963), Saraswatichandra (1968),
Nutan and Dev Anand worked together in 4 films Paying Guest and Barish in 1957,Manzil in 1960 and Tere Ghar Ke Samne in 1963.Their Chemistry was unforgettable

Song from Johny Mera Naam 1970
Hema Malini first acted in a main role in Sapno Ka Saudagar (1968), and went on to feature in numerous Bollywood films, primarily as the lead actress. Hema Malini and Dev Anand have worked jointly in 9 movies.The most popular movies of Hema Malini and Dev Anand are Chhupa Rustam, Johny Mera Naam ...Most of their films were hit except the last 2 films Sachche Ka Bol Bala (1989) and Censor (2001) 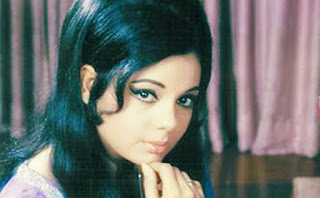 Song from Tere Mere Sapne 1971
As an adult, her first role in A-grade films was that of the role of the sister of the hero in O. P. Ralhan's Gehra Daag.It took Raj Khosla's blockbuster Do Raaste (1969), starring Rajesh Khanna, to finally make Mumtaz a full-fledged star.She won the Filmfare Best Actress Award for one of her favourite films Khilona in 1970 after she became one of the top heroines in the 1970s.She did 2 films with Dev Anand Hare Rama Hare Krishna  and Tere Mere Sapne in 1971 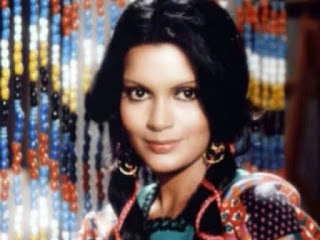 Her aunt was Bollywood actress Nargis Dutt, and her uncle was character actor Anwar Hussain. She acted in several movies such as Anokhi Raat (1968) with Sanjeev Kumar, Gambler (1971) and Prem Pujari (1970) with Dev Anand. After playing his heroine, she famously turned down the role of playing Dev Anand's sister, in cult hit Hare Rama Hare Krishna (1971),

Song from Heera Panna1973
She is popularly known as Raakhee Gulzar after her marriage to lyricist-director Gulzar. In four decades of acting, Raakhee won three Filmfare Awards and a National Film Award, among others. her first Hindi film was Jeevan Mrityu with Dharmendra.  in 1970.In 1971, Rakhee played a double role opposite Shashi Kapoor in Sharmilee, and in the same year she also acted in Lal Patthar and Paras; all three films were popular and she therefore became established as a major Hindi lead heroine. Rakhee and Dev Anand have worked jointly in 5 movies.She was the second heroine in 1973 film Heera Panna,Lead heroine in Banarsi Babu,Joshila and Lootmar in 1980,she was also there in Anand Aur Anand 1984

HEROINES  Worked In One Film 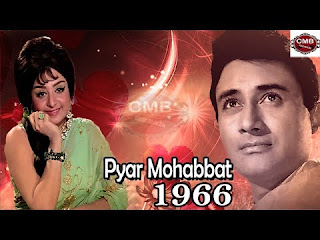 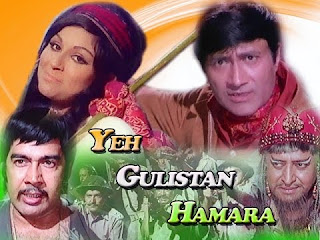 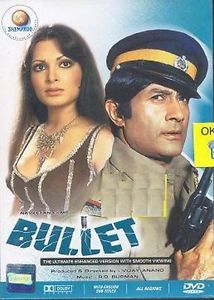 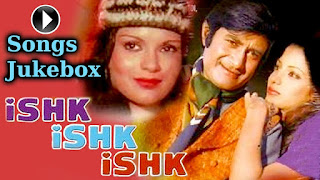 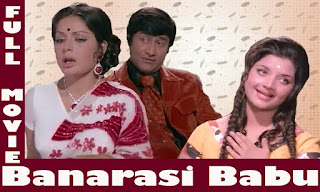 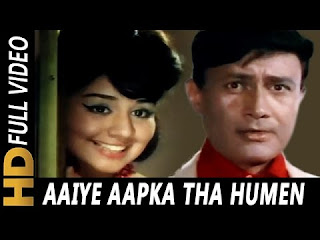 Posted by /bolywoodfiles.blogspot.com at 10:52:00 No comments: