SUMAN KALYANPUR-The voice often mistaken to be of Lata Mangeshkar 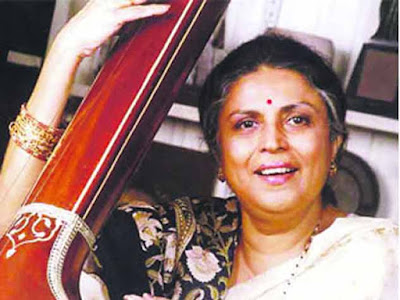 Remembering Suman Kalyanpur(Born on 28th Jan 1937) on her 80th Birthday today as a female Playback singer who was often mistaken by Lata's voice because of her uncanny similarity to Lata’s voice. Many of her songs are indistinguishable from Lata’s style
Suman Kalyanpur started singing in the Golden Era of Bollywood. This was also the time when female playback singing was dominated by the Mangeshkar sisters, more Lata than Asha (Bhosle). Though
she was diligent, sharp and had a lovely voice but never was the first choice of Music Directors or Producers.She used to get chance when  Lata was unavailable, or if the producers could not afford her rate of Rs 100 per song, or if the song suffered because of her refusal to sing with Rafi over royalty issues.There were rumours also that Mangeshkar sisters specially Lata didnt wanted that she should be given songs in the films, Lata would sometimes refuse to sing with composers who chose Kalyanpur, and they couldn’t afford to upset Lata.
Suman Kalyanpur sang two duets with Lata before her own songs became popular. Kabhi aaj kabhi kal in the Balraj Sahni-starrer Chand (1959) was a Hemant Kumar composition.
Suman Kalyanpur's father Shankar Rao Hemadi hailed from an elite Saraswat Brahmin family belonging to Mangalore, Karnataka. Hemmady is a village in Kundapur Taluk of Udupi District , Karnataka.Apart from father and mother Seeta Hemmady, there were 5 daughters and one son in the family with Suman being the eldest among her siblings.
In 1943, her family moved to Mumbai, where she received her musical training.After completing schooling from Mumbai’s famed Columbia High School, She got admission in the prestigious Sir J. J. School of Arts for further studies in Painting. Simultaneously, she started learning classical vocal from Pune's Prabhat Films' music director and a close family friend, ‘Pandit Keshav Rao Bhole’
In 1952 she was offered to sing a song in All India Radio,that was her first public performance.Latter on
she got a chance to sing for the Marathi film 'Shukrachi Chandni' released in the year 1953. At that time, Sheikh Mukhtar was making the film 'Mangu' whose composer was ‘Mohammed Shafi’. Sheikh Mukhtar was so impressed with her ‘Shukrachi Chandni’ songs, that he got her to sing 3 songs for the film ‘Mangu’. However, due to some unknown reasons, later ‘O.P,Nayyar’ replaced ’Mohammed Shafi’ and only one of her 3 songs, a lullaby “Koi Pukaare Dheere Se Tujhe” was retained in the film. Thus, she entered Hindi cinema,Though Mangu was the first film she signed to sing but it was the film "Darwaja" which released earlier in 1954.
In the same year (1954), Suman sang the film version of O.P.Nayyar’s hit ensemble song ‘Mohabbat Kar Lo Ji Bhar Lo Aji Kisne Roka Hai’ with Rafi and Geeta Dutt for the film ‘Aar Paar’.
She was 16 and a student at JJ School of Art when singer Talat Mehmood heard her sing at a college function and “gave a lot of shabaashi”. He then put her in touch with recording company HMV. Though HMV producers found her voice “amateurish”, Kalyanpur got a song in Darwaaza (1954) and debuted with Talat (Ek dil, do hain talabgaar). The song made the film industry sit up and notice. This was followed by Chhodo chhodo mori baiyaan (Miya Bibi Raazi, 1960), Na tum humein jaano (Baat Ek Raat Ki, 1962), Mere sang ga (Janwar, 1965), Aajhuna aaye baalma (Saanjh aur Savera, 1963), Tumne pukaara aur hum chale aaye (Rajkumar, 1964) and several others.
She recorded some popular duets with male singers Mohammed Rafi, Manna Dey, Mukesh, Talat Mahmood, and Hemant Kumar. Some of her memorable duets with Rafi are "Aajkal Tere Mere Pyaar Ke Charche", "Na Na Karte Pyaar", "Tumse O Hasina", "Rahen Na Rahen Hum", "Parbaton Ke Pedon Par Shaam Ka Basera He", "Ajahuna Aye Balama", "Tumane Pukara Aur Hum Chale Aye", "Bad Muddat Ke Yeh Ghadi Ayee", "Mujhhe Yeh Bhool Na", "Dil Ne Phir Yaad Kiya", "Tujhko Dilbari Ki Kasam" and "Chand Takata Hai Idhar". With Manna Dey, she sang the popular duet "Na Jane Kahan Ham The" under the music direction of Dattaram. With Mukesh she has sung many popular duets like `Yeh Kisne geet chheda', "Akhiyon ka noor hai tu", "Mera Pyar bhi tu hai", "Dil ne phir yaad Kiya", "Shama se koi Kehde" etc.
Suman married a Mumbai based businessman Ramanand Kalyanpur in the year 1958 and thus, became Suman Kalyanpur from Suman Hemadi. He accompanied her for every recording session after her marriage.She lived in the joint family of her husband which was very conservative,her husband never allowed her to sing Cabret Songs,she never attended filmy parties,nor appeared in stage shows even not given interviews to the media,even Veteran radio artiste Ameen Sayani had to chase her for close to 45 years before he could record a one-hour show with her in 2005.
Suman Kalyanpur's career started in 1954 and was very popular singer in the 1960s and 1970s. She recorded songs for movies in several languages besides Hindi, Marathi, Assamese, Gujarati, Kannada, Bhojpuri, Rajasthani, Bengali, Oriya and Punjabi.She was a bit unfortunate as she never won the National Film Awards or Filmfare Award for singing but is still considered among the popular singers of her prime time. She has sung a total of 857 Hindi songs.
Here are  some of my favourite Solo as well as Duets of Suman Kalyanpur
Here is one particular song in which I think she seems to have clearly overshadowed Lata.Its from the 1964 film FARIYAAD "Haal-e-dil unko sunana tha sunaya na gaya "

This Song has 2 versions,one a solo by Lata and a Duet with Suman Kalyanpur
Song from Mamta 1966

Posted by /bolywoodfiles.blogspot.com at 12:13:00 No comments: