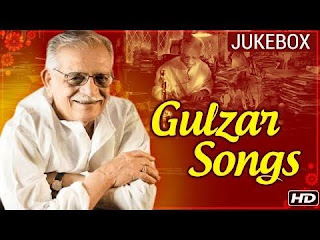 Gulzar (Born on 18th August 1934) became popular as a lyricist in the unusually worded song from Khamoshi in 1969 "Humne dekhi hai un aankhon ki mehakti khushboo/Haath sey chhoo ke ise rishtoon ka koi naam na do". .Though he penned his first film song "Mora gora ang laiy ley mohe shaam rang daiye dey/chhup jaoongi raat he mein mohe pee ka sang daiye dey." from Bimal Roy's Bandini released in 1961.
Gulzar, who began as an apprentice with Bimal Roy, joined Hrishikesh Mukherjee after his death. He wrote for Kabuliwala, Sannaata, Do Dooni Chaar Biwi Aur Makan etc. With Mere Apne (1971), he turned director.The success of his Mere Apne encouraged Gulzar to experiment with novel subjects. Next in the line came films like Koshish, Parichay, Achanak, Kinara and Aandhi.
In Aandhi, Gulzar wove a story of estrangement between a couple (Sanjeev Kumar and Suchitra Sen) against the backdrop of politics. Gulzar is at his sublime best in the song "Tere bina zindagi se shiqwa to nahin."The lyrics 3 the agony and regret of the choices made.
However, Gulzar's most successful songs as a lyricist were to come out later, of his association with Rahul Dev Burman who he described later as an anchor in his life.Few of his songs with R D Burman are Beeti Na Bitai Raina, Parichay (1972), Tere Bina Zindagi Se, Aandhi (1975), Aaj Kal Paaon, Ghar (1978), Do Naina Aur Ek Kahani, Masoom (1983), Mera Kuch Samaan, Ijaazat (1988).

Posted by /bolywoodfiles.blogspot.com at 10:07:00 No comments:

The Songs of Gulzar 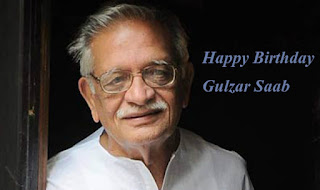 Gulzar, originally Sampoorna Singh Kalra started to work as a garage mechanic in Worli while writing poetry in his spare time. Gulzar, as any other dreamer who comes to Bombay for the first time, was bitten by the film bug. It is said that Gulzar's first song was Mora Gora Rang Le Le from 1963 film Bandini. that's not a true the first song written by him was from Kabuliwala 1961, "Ganga Aye Kahan Se" the Hindi translation of a Bengali song.sung by Hemant Kumar. After that Bimal Roy asked him to write songs for Prem Patra 1962 film.
He then began writing for films for directors like Hrishikesh Mukherjee and Asit Sen. Some of the films that Gulzar has written include Anand (1970), Guddi (1971), Bawarchi (1972) and Namak Haram (1973) for Hrishida and Do Dooni Char (1968), Khamoshi (1969) and Safar (1970) for Asit Sen.
With Mere Apne in 1971, he donned the role of a filmmaker. Gulzar went on to make Parichay (1972) and Koshish (1972). With Sanjeev Kumar, he made Aandhi (1975), Mausam (1975), Angoor (1981) and Namkeen (1982) He also made film with Jeetendra (Parichay, Khushboo (1975), Kinara (1977), with Vinod Khanna: Achanak (1973), Meera (1979) and Lekin (1990) and Hema Malini: Khushboo (1975), Kinara (1977), Meera (1979)
As a lyricist, Gulzar had a close association with the music director Rahul Dev Burman. Both of them gave some gems of the songs. Later he is associated with Vishal Bhardwaj  in Maachis (1996), Omkara (2006) and Kaminey (2009); A. R. Rahman in Dil Se.. (1998), Guru (2007), Slumdog Millionaire (2008) and Raavan (2010)
Rahman and Gulzar won the Academy Award for Best Original Song for "Jai Ho" at the 81st Academy Awards. The song received international acclaim and won him a Grammy Award (shared with Rahman) in the category of Grammy Award for Best Song Written for a Motion Picture, Television or Other Visual Media. Gulzar has written lyrics and dialogues for several Doordarshan TV series including Jungle Book, Alice in Wonderland, Hello Zindagi, Guchche and Potli Baba Ki with Vishal Bhardwaj.
Gulzar is married to actress Raakhee. The couple has a daughter, Meghna Gulzar (Bosky). Meghna Gulzar grew up with her mother and father and, after completing her graduation in filmmaking from New York University, went on to become a director of films such as Filhaal, Just Married, Dus Kahaniyaan and Raazi
He was awarded the Padma Bhushan in 2004 and the Sahitya Akademi Award in 2002. He has won a number of National Film Awards and 20 Filmfare Awards. He was also given Baba Saheb Phalke Award.

Posted by /bolywoodfiles.blogspot.com at 12:17:00 No comments: 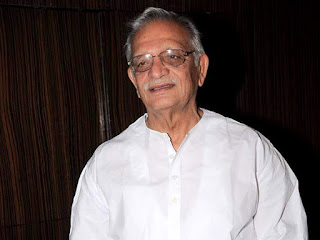 On the 83rd Birthday of Gulzar(18th Aug 1934 Born at Dina, Pakistan ),I look at the the songs and poetry he writes.His film journey started as a song writer with BANDINI(1963) with the famous song of Lata"Mora Gora Ang Layle"He is relevant even today.His songs are for every mood, and every occasion.He has hovered around in the background while you were at the nearest nightclub (Dhan Te Nan) or at the crossroads, worrying about your place in the big city (Ek Akela Is Shahar Mein...). He has helped you survive heartbreak (Mera Kuch Saamaan) and celebrate love (Aaj Kal Paon Zameen Par).
He is a magician of words,he presents a different side to every emotion, and brought new meaning to every situation. He can say very convoluted things in simple words and can make simple inscrutable. It's up to you, what you like.

.His lyrics however did not gain much attention until the 1969's Khamoshi, where his song "Humne Dekhi Hai Un Aankhon Ki Mehekti Khushboo" became popular. The song for the film Guddi(1971 )  "Humko Man Ki Shakti Dena" was a prayer which is still sung in many schools in India.His song "Jai Ho" from Slumdog Millionaire(2008) brought him the Oscar Award.The song received international acclaim and won him a Grammy Award (shared with Rahman) in the category of Grammy Award for Best Song Written for a Motion Picture, Television or Other Visual Media.

He never chased the spotlight; it was the other way around. Interestingly, the enigma of this 83-year-old poet-director is more or less intact. Gulzar’s respect among his fans is something that makes them overlook his cynicism.He is unique in bollywood.There’s no poetry on the silver screen of Hindi cinema like Gulzar’s

Song from Bandini 1963
.
Remember the song Mera kuchh saamaan tumhaare paas pada hai,from Ijaazat sung by Asha Bhosle,The song recalls the bitter-sweet moments the lovers shared: 116 moonlit nights, surviving a rainy walk under a single umbrella, complaints and promises, and a night wrapped in a letter I doubt there are many who haven’t lived what is described here, who haven’t remembered these described moments long after they’re dead, and who haven’t cried a little in memory.

Dil To Bachcha Hai from Dedh Ishqiya sung by Rahat fateh Ali Khan-A rare gem in a youth-obsessed industry, Dil To Bachcha Hai is all about the unpredictability of the heart and the fear of falling in love with someone "unsuitable".What a poetry
Dil sa koi kameena nahi
Koi to roke, koi to toke
Iss umr mein ab khaoge dhokhe
Darr lagta hai ishq karne mein ji
Dil to bachcha hai ji...

The journey that started with Mera gora rang lei le (Bandini, 1963) continues in all its glory, and in all possibility Gulzar’s repertoire is not yet short of deadly creations. Yes, we miss the director of timeless films such as Mere Apne, Koshish, Parichay, Mausam, Aandhi, Kitaab, Lekin, Ijazat and Maachis, but it’s fine as long as his pen is producing mesmerising songs.
Gulzar also wrote poetry, dialogues and scripts. He was awarded Padma Bhushan, the third-highest civilian award in India, the Sahitya Akademi Award and the Dadasaheb Phalke Award — the highest award in Indian cinema. He has won several Indian National Film Awards, 20 Filmfare Awards, one Academy Award and one Grammy Award.
Posted by /bolywoodfiles.blogspot.com at 13:26:00 No comments: 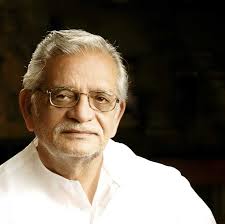 participant in antakshari and keen learner of shairis, he was inclined towards literature and

poetry right from his school days. That time his name was Sampooran Singh Kalra. 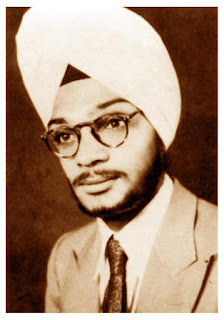 He took the pen name Gulzar Deenvi and later simply to Gulzar.Before becoming a writer, Sampooran took up lot of small jobs in Mumbai one of them was in a garage where he used to touch up accident cars by creating shades of paint.Writing was his passion,he used to write poetry whenever he get spare time in the car garage. Bimal Roy used to come to that garage for repairing his car.He met Gulzar there and read his poems there ,he asked him to leave this job and concentrate on writing.He made him one of his Assistant Director.In Bandini(1963) Gulzar wrote his first song that too on the reccomendation of Shailendra who wrote all the songs accept one" Mora Gora Rang Le Le" sung by Lata Mangeshkar.

From 1963 to 1968 he was assistant Director to Bimal Roy and Hrishikesh Mukharjee.Later on he started writing scripts and Dialogues for films.

He then directed Parichay and Koshish.starring Sanjeev Kumar and Jaya Bhaduri,both played deaf and dumb.This movie was highly appreciated.He was given National Award for the best Script.

In 1973, he directed Achanak inspired by the 1958 murder case later he directed Aandhi, based on the Hindi novel "Kaali Aandhi" by Kamleshwar.

In 1975 Khushboo directed by him starring Jeetendra and Hema Malini was released The film's music composed by R. D. Burman, with lyrics of Gulzar. Haunting song "O Majhi Re" sung by Kishore Kumar, was famous both for lyrics and melody. A couple of other songs like 'do naino mein aansoo bhare hain' and 'bechara dil kya kare' were also very popular.

In the same year his two more directorial movies Mausam and Aandhi released For Mausam he was given National Award for Best Feature Film and Filmfare Award for Best Direction.and nomination for Direction and Lyrics for Aandhi

In 1977 he wrote songs for Gharonda ,He was given Filfare Award for the song "Do Deewane Is Shahar Mein"

In 1980 he won another Filmfare Award for Aanewala Pal Jaane Wala Hain from Gol Maal directed by Hrishikesh Mukharjee.


In 1981 he once again won Filmfare Award for the song "Hazaar Raahen Mud Ke Dekhi" from Thodi Si Bewafai.
In 1982 he wrote and directed Angoor the film was based on Comedy of Error

In 1984 he was given Filmfare Award for the song Tujhse Naraaz Nahin Zindag from Masoom.

In 1988 he was given National Award for the song Mera Kuchh Saamaan from Ijazat and for the same song in 1989 the Filmfare Award
In 1988, Gulzar directed an eponymous television serial Mirza Ghalib starring Naseeruddin Shah and broadcast on Doordarshan. which was highly appreciated.


Gulzar was awarded the Padma Bhushan in 2004 for his contribution to the arts and the Sahitya Akademi Award in 2002. He has won a number of National Film Awards and 20Filmfare Awards

At the 81st Academy Awards, he won the Academy Award for Best Original Song for "Jai Ho" (shared with A.R.Rahman), for the film Slumdog Millionaire. On 31 January 2010, the same song won him a Grammy Award in the category of Grammy Award for Best Song Written for a Motion Picture, Television or Other Visual Media. Gulzar has won the most Filmfare Awards for Best Lyricist (11 in total) as well as four Filmfare Awards for Best Dialogue. He was also awarded the 2012 Indira Gandhi Award for National Integration.

Gulzar received the 2013 Dadasaheb Phalke Award, the highest award of the Indian cinema, on 3 May 2014 at the 61st National Film Awards. 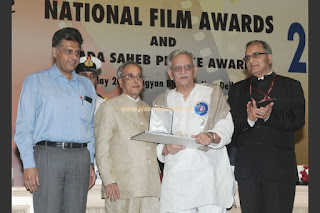 Gulzar is married to actress Raakhee. The couple have a daughter, Meghna Gulzar (Bosky).Meghna Gulzar grew up with her mother & father and, after completing her graduation in films from New York University, went on to become a director of films like Filhaal, Just Married , Dus Kahaniyaan and Talvar

This film was made by Samir Chowdhury (Salil's younger brother) and was produced by Padma Trivedi. Sanjay Kumar and Anjana were the main stars. According to Samir Chowdhury Sanjeev Kumar's acting was excellent. Lata and Mukesh were so impressed with this film that they wanted the film distribution rights for Maharastra and Rajasthan. Sadly the film and the soundtrack was completely destroyed

Posted by /bolywoodfiles.blogspot.com at 11:54:00 No comments: