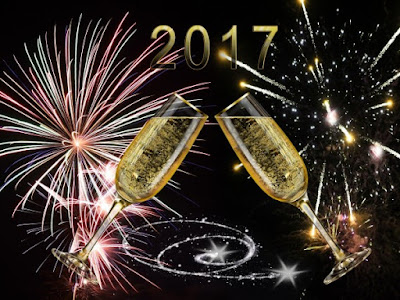 Music is probably the most wonderful expression of a celebration, coming from the human spirit. And the celebration of the change of year is the most universal event that occurs across the globe. As we are entering to 2017,let's celberate this day with some of the Bollywood New Year's Song

And here is wishing you all a very pleasing, successful, and a very HAPPY NEW YEAR to all friends and readers on this blog.
Sabko mubaarak naya saal
This song is very fast paced and racy, that will definitely set your feet tapping on the floor. The singing voice is that of Asha ji, The film was Samrat released in 1954. The music is composed by Hemant Kumar, supported by Ravi as the assistant music director.

Saal mubaarak saahib jee
This songis from the film Do Jasoos released in 1975,The singing voices are those of Mukesh and Mohammed Rafi, with a supporting chorus.

Happy new year to you This song is sung by Shailendra Singh and chorus. Hasrat Jaipuri and Raveendra Jain The song is picturised on Shailendra Singh, Moolchand, Kamal Kapoor, Raj Kapoor, Rajendra Kumar etc.The film is Do Jasoos released in 1975
Song from Do Jasoos

Naye Puraane Saal Mein Ek Raat Baaki Hai This song is from the 1981 film ‘Raksha’ produced by P Mallikarjun Rao under the banner of Bharati International, and is directed by Ravi Nagaich. The star cast includes Jeetendra, Parveen Babi, Ranjeet, Paintal, Prem Chopra,Music was given by R D Burman and sung by Kishore and Aasha Bhonsle

Posted by /bolywoodfiles.blogspot.com at 11:59:00 No comments: