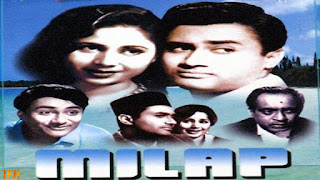 Could you imagine a film in which Dev Anand not singing a song? He once rejected the film Zanzeer (which later Amitabh Bachchan did) because there was no song for him in the script.  Hard to comprehend how Raj Khosla could pass a script where the hero does not sing a song. In fact, there is a very beautiful solo song by Hemant Kumar which was also sung by lata Mangeshkar as solo but Hemant Kumar version was not included in the film.
The film was released in 1955, the year that saw Dev Anand in great form. “Insaniyat” featured him with Dilip Kumar and he enjoyed hits like “House No 44”, “Munimji” and “CID”. A year earlier, “Taxi Driver” had showcased his acting talents.
Dev Anand had hits like “Ziddi”, “Baazi” and “Jaal” before “Milap” graced the screen and this was his sixth movie with the hugely talented Geeta Bali. 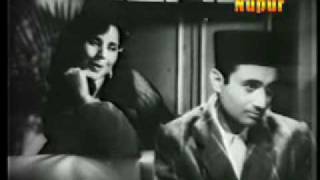 Dev Anand playing a dreamy-eyed villager, dressed in shirt-pajama, unthinkable and unacceptable, we miss his mannerism. Lovely and talented Geeta Bali is the heart and soul of this movie.KN Singh makes for a great, slimy, sophisticated villain as always but the Johnny Walker comedy act is a big, big weakness in the film. In particular, the tacky endless sequence with Johnny behind the wheel of the car just seems to go on and on and gets on one’s nerves after a while.
This film was the first film by Raj Khosla as a director, before that he was an assistant to Guru Dutt. The music was composed by Datta Naik, while Sahir Ludhianvi wrote the lyrics for the songs

Posted by /bolywoodfiles.blogspot.com at 14:41:00 No comments: 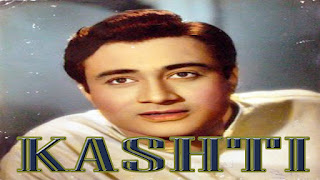 Ferry the film was released in 1954, produced and directed by Hemen Gupta starring Dev Anand and Geeta Bali
Ferry is very different from the usual (mainly romantic or noir) films of Dev Anand film. Dev Anand in a Dhoti Kurta and playing the Sarod is surprising to his fans. In this film, Dev Anand plays a widower and father of 8 years child named Raju, on an island off of Bombay's Gateway of India. Raju has not been told of his mother's demise and believes that she will return home by the next boat. He is looked after and abused by Vikas' aunt and manages to run away. 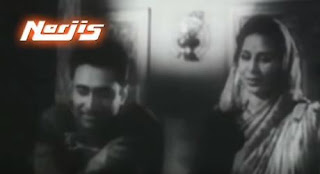 When Vikas goes to work one day, villagers find an unconscious female and bring her to his house. She is looked after, and Raju believes that his mother has returned. When Vikas returns, he decides to let this female, whose name is Juhi, live with them - little knowing that she is a runaway prostitute. 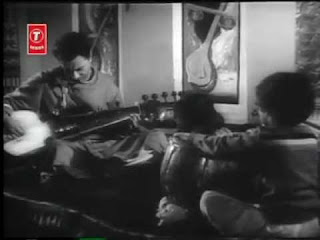 The most interesting in the film is an instrumental Jugalbandi by Geeta Bali and Dev Anand playing the Sitar and Sarod respectively (Originally played by Pt. Nikhil Banerjee and Ustad Ali Akbar Khan). Music by Hemant Da.

Posted by /bolywoodfiles.blogspot.com at 12:26:00 No comments: 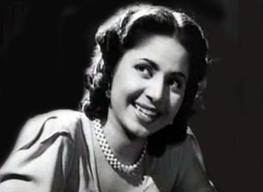 Geeta Baali started her film career as a child actress, at the age of 12, with the film The Cobbler. She made her debut as a heroine in Badnaami (1946).
Born in Sargodha, Punjab in 1930 as Harkirtan Kaur,  she lived with her parents and a sister in Amritsar.Their family moved to Mumbai sometime in the forties and a young Harkirtan Kaur started working in movies to supplement the family income, first as a child actor and later as a lead actress. 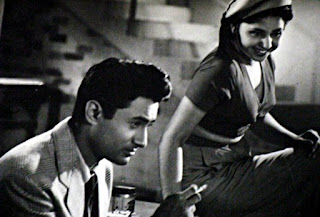 She became star with Baazi co starring Dev Anand.Before that her film Bawre Nain (1950) with Raj Kapoor was a hit and she got  rave reviews for her performance as a village belle".She also appeared in Anand Math 1952,The film starred Prithviraj Kapoor, Bharat Bhushan,  Pradeep Kumar and Ajit in the lead. Pradeep Kumar made his debut in Hindi cinema, as did the film's music director Hemant Kumar.
She became a star in the 1950s.She received a Filmfare Nomination as Best Actress for "Vachan" (1955) and another nomination as Best Supporting Actress for "Kavi" (1955). 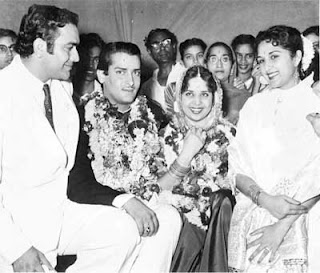 In 1955 she married Shammi Kapoor who was 2 years younger than her but not yet a star. Their passionate and romantic saga began in 1955 when Shammi and Geeta worked together in a film titled Rangeen Raatein. While shooting for it in Ranikhet ( a hill station) the two spent a lot of time together and soon fell in love.
She contributed a lot to the making of Shammi Kapoor. She gave him his confidence and his personality. If you see the way Shammiji danced... that was Geeta Bali's personality,Interestingly, her personal commitments did not affect her career. She continued acting even after marriage. And ironically it was during one of her professional commitments that she contracted small pox.  Unfortunately, she died on January 21,1965 merely 15 days after picking up the disease.Geeta Bali left behind her husband Shammi Kapoor and their two small children. Geeta Bali was only 35 years old.
Despite a short career (that spanned hardly some 15 years or so), she managed to carve a niche for herself
.Here are my favourite songs picturised on Geeta Bali, in no particular order. The list is restricted to 15 songs because of real life time constraints
Ye Raat, Ye Chaandani Phir Kahaan, Sun Jaa Dil Ki

Posted by /bolywoodfiles.blogspot.com at 10:41:00 No comments: