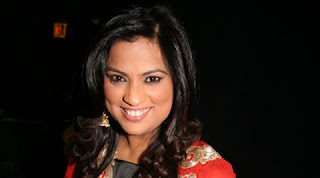 Richa Sharma (born 29 August 1980) a bollywood trained playback singer as well a devotional singer.In 2006,Under the tutelage of Pandit Aaskaran Sharma, Richa went on to get proper training in Indian classical and light music.Richa landed in Mumbai in 1994. She sang cover versions and bhajans to ensure she had her bread and butter and simultaneously continued her struggle in Bollywood.

She made her debut in Bollywood with Sawan Kumar's Salma Pe Dil Aa Gaya in 1996 and followed it up by a number of films until the big hit came by in the form of Taal where she sang for A.R. Rahman.

Another important song for Richa is  ‘Sajda’ (‘My Name Is Khan’)she won Zee Cine Award for this song.

She  has also done quite a few albums to showcase her talent. Albums like Ni Main Yaar Nu Sajda Kardi,Piya and Winds of Rajasthan (for Times Music released early 2004) have brought out the classiness and grace in Richa's voice and her variety as a singer.

Posted by /bolywoodfiles.blogspot.com at 09:02:00 No comments: