Javed Akhtar was born on 17th Jan 1945, His father was a  famous poet and Lyricist but he had to struggle in his early days in Bombay. He came to Bombay On October 4,1964  Within six days of his arrival he had to leave his father's home. He had 27 paise in his pockets. He had no certainty of either food or shelter.
He managed to write dialogue for a minor film for Rs100. Sometimes he gets some work as an assistant or otherwise but often even this work eludes him.
He used to write a few scenes for the producers as Ghost Writer, The credit went to the ScreenPlay writer of that film.For this, he was paid a meagre amount of Rs 100. 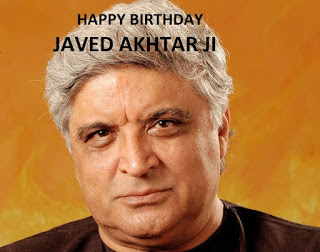 For a year he had been living in Kamaal Studio (present-day Natraj Studios). He slept wherever he fancy-sometimes in some verandah, sometimes in some corridor, sometimes under some tree. He also slept for few days at the Mahakali Caves (these ancient Buddhist Caves in crowded East Andheri near Kamalistan Studio were a part of a desolate landscape in those days where hemp smoking mendicants layabout).
For a few days he lived with a friend who was a gambler, he taught him the tricks of gambling. For a few days, the cards provided the means of survival. After some days a famous and successful writer called and offered him a job at Rs 600 per month. The work was to ghostwrite for him. There was a struggle of 5 years for him. At last in November 1969 he got some work which in film parlance is called a "break"..
He got a job as an independent scriptwriter on Yakeen which flopped. Akhtar then joined with his friend Salim Khan to develop the story for Adhikar.After that both wrote for G P Sippy for Andaz, the film was hit and after that Rajesh Khanna asked them to write the screenplay of Haathi Mere Saathi.
Their first big success was the script for Andaz, followed by Adhikar (1971), Haathi Mere Saathi and Seeta Aur Geeta (1972). They also had hits with Yaadon Ki Baaraat (1973), Zanjeer (1973), Haath Ki Safai (1974), Deewaar (1975), Sholay (1975), Chacha Bhatija (1977), Don (1978), Trishul (1978), Dostana (1980), Kranti (1981), Zamana (1985) and Mr. India (1987). They have worked together in 24 films including two Kannada films – Premada Kanike and Raja Nanna Raja. Of the 24 films they wrote, 20 were hits.Javed is an Urdu poet before writing songs for films he was writing poetry.It was Yash Chopra who insisted him to write songs for his film Silsila(1981). After that he gave us many memorable songs He won 5 National Awards for his songs and also 5 Filmfare Awards for lyrics. In 2013, he received the Sahitya Akademi Award in Urdu, India's second highest literary honour, for his poetry collection Lava.He was also nominated a Rajya Sabha MP.from Nov 2009 to Nov 2015.He married to Honey Irani, with whom he had two children, Farhan Akhtar and Zoya Akhtar, both film directors and actors. The father-and-son duo has worked together in films such as Dil Chahta Hai, Lakshya, Rock On!! and Zindagi Na Milegi Dobara with Zoya. He divorced Irani and later married Shabana Azmi, the daughter of eminent Urdu poet, Kaifi Azmi.Some of his Popular Songs