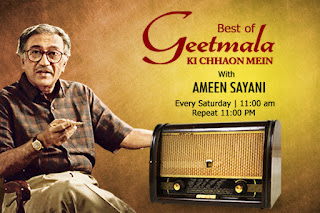 When we think of Radio Ceylon, only one name emerges in our brain and that of Ameen Sayani. He is definitely the most popular and most renowned radio announcer from India. He achieved worldwide fame, and especially in all across South Asia when he presented his hit countdown show Binaca Geetmala How can we forget  his signature address ‘Behenon aur bhaiyo…!’
His best-known radio show was; Binaca Geetmala, later renamed as Cibaca Geetmala which has been broadcasted since 1952 from Radio Ceylon, and later from Vividh Bharati, AIR – for a total of over 42 years.
Ameen Sayani (Born on 21 Dec 1932) started his career as an English broadcaster but when he went for an audition for AIR’s Hindi section, he was told after the test that there are hints of English and Gujarati in his accent and he cannot be recruited. But Sayani was not someone to be disheartened and went on to become one of India’s most loved radio presenters.
Ameen Sayani is from the family of Freedom Fighters, his mother was a close associate of Mahatma Gandhi. As advised by Mahatma Gandhi, his mother published The fortnightly, RAHBER (1940 to 1960), was simultaneously published in the Devnagri (Hindi), Urdu and Gujarati scripts – but all in the simple "Hindustani" language promoted by Gandhi. Sayani assisted his mother, Kulsum Sayani, in editing, publishing and printing a fortnightly journal for neo-literates.
He was introduced to All India Radio, Bombay, by his brother Hamid Sayani. Ameen participated in English programs there for ten years.
Beside announcer he has produced, compered (or spoken for) over 54,000 radio programmes and 19,000 spots/ jingles since 1951.

He has conferred the Padma Shri award in 2009. Besides this, Ameen Sayani has been felicitated with many awards:

Posted by /bolywoodfiles.blogspot.com at 14:00:00 No comments: 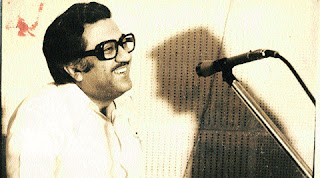 His style of addressing the crowd with "Bhaiyo aur Behno " (meaning "brothers and sisters") is still treated as an announcement with a melodious touch. He achieved fame and popularity all across South Asia when he presented his Binaca Geetmala, a countdown program of Hindi hit songs over the airwaves of Radio Ceylon on every Wednesday from1952 to 1988. He remains one of the most imitated announcers of India
His mother Kulsum Sayani was a social activist, recipient of Padma Shri and a disciple of Mahatma Gandhi. She edited, published and printed a fortnightly journal for neo-literates in simple language, on the instructions of Mahatma Gandhi. From his childhood, Ameen helped his mother in all the activities related to the journal, Rahber, which was published from 1940 to 1960.
In the early 1950s, All India Radio (AIR) had stopped broadcasting Hindi film music. It was a mad decision, which hit AIR very badly and Radio Ceylon, which was still finding its ground in the radio industry, came up because of that. Ameen Sayani joined All India Radio, Bombay, on a reference from his brother Hamid Sayani. There, Ameen did English programs for ten years. It was sad that AIR never recognized Ameen's talent, and he had to use Radio Ceylon all the time.
Between All India Radio (since 1951), AIR’s Commercial Service (since 1970) and various foreign stations (since 1976), Sayani has produced, compared (or spoken for) over 54,000 radio programmes and 19,000 spots/ jingles.

He was also a part of various movies throughout the years like Bhoot Bungla, Teen Devian, Boxer, and Qatl. He appeared in all of these movies in the role of an announcer in some event.
He has conferred the Padma Shri award in 2009.
In one of his interviews, the versatile presenter revealed that Amitabh Bachchan, who had wished to become a radio presenter before he tried his luck in Bollywood, visited the studios multiple times but failed to make the cut as Ameen Sayaani didn’t clear him.
Binaca Geet Mala

Posted by /bolywoodfiles.blogspot.com at 09:17:00 No comments: 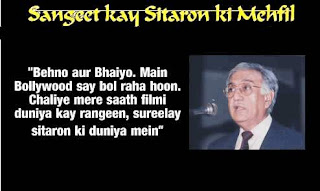 Ameen Sayani,Born on 21st Dec 1932 is  a popular radio announcer from India. He achieved fame and popularity all across South Asia when he presented his Binaca Geetmala program of hits over the airwaves of Radio Ceylon.
He was introduced to All India Radio, Bombay, by his brother Hamid Sayani. Ameen participated in English programmes there for ten years.He is one of the most imitated announcers even today. His style of addressing the crowd with "Behno aur Bhaiyo" is still treated as an announcement with a melodious touch.
He was conferred the Padma Shri award in 2009. Besides this, Ameen Sayani has been felicitated with many awards:Hisnflagship programme BINACA GEETMALA  commenced over the Commercial Hindi Service of RADIO CEYLON towards the end of 1952 and shifted to All-India Radio’s VIVIDH BHARATI network in 1989 upto 1992.
Besides radio anouncement he compered more than 2000 stage shows.He remains All Time Great Anouncer of India,no one can come to his stature.