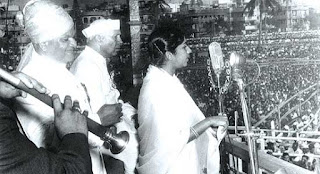 When the young generation film directors  of today blame Nehru for his so called ‘mistakes’, they speak out of ignorance, not knowing how great a visionary he was in laying for them the foundation of the largest film industry in the world.Nehru took cinema very seriously.
After independence when Nehru began to build the nation he deployed all available means in the process of nation building. That included using a vast pool of cultural assets to revive the glorious past of its various civilizations and communities.Cinema could become its powerful engine.
He wanted Indian Films to Flourish not only in India but also internationally.He started inviting foreign film personalities to India. he started the International Film Festival in India. The first International Film festival held in 1952. Films from the USSR, USA, UK, France, Italy, Germany and Japan were screened to audiences in Bombay, Calcutta, Madras and New Delhi. Leaders of the Indian film industry joined hands to support the effort.India’s first Prime Minister, Pandit Jawaharlal Nehru presided over the first Film Festival held in the auditorium of the National Physical Laboratory.
The first International Film Festival did not lay the foundation for holding international film events in the country. However, it did leave an indelible impact on the Indian film industry.
It was Nehru who insisted to establish an Institute for training of various aspects of cinema.The Film Institute of India was opened in 1961.He also constituted Acadmies for arts, literature and music with a similar one in mind for Indian cinema. He asked the Sangeet Natak Academy to organize a national seminar on Indian Cinema. Indira Gandhi was made the Secretary for this seminar. Prithviraj Kapoor and Devika Rani were appointed directors, representing the film industry.
It was his dream that Indian films to be seen all over the globe.A seminar on Development Of Indian cinema was organised in 1955 which was inaugurated by Nehru Ji .On his innaugral speech he said-
‘I see a great future, a glorious future, for Indian films. Before long I expect Indian films to be exhibited to crowded houses all over the world, and they will earn not only money for our country but also a reputation for beauty, goodness and truth. India must, and will make a distinctive contribution to the film art of the world and I am confident, it will’.
Nehru did not see many filmsduring his lifetime. We know that he did see the long feature documentary film on Netaji’s Subhash Chandra Bose’s struggle in Burma and Malaya as a fighter for India’s freedom. This documentary had been smuggled into India by Vallabhbhai Patel for an early morning winter screening in the local Regal Theater in Delhi.
Nehru Ji wanted a feature film on Gandhi.Do you know that before Richard Attenborough's dream project,  in 1952, Gabriel Pascal, a Hungarian film producer and director had secured an agreement with the Prime Minister of India at that time, Pandit Jawaharlal Nehru to produce a film on Mahatma Gandhi's life. However, Pascal passed away in 1954 and the film could not be made.
Nehru saw Achhut Kanya, Doctor Kotnis Ki Amar Kahaniin 1949. In 1955, he saw the Japanese filmThe Last Warbased on the effects of nuclear warfare and Battleship Potemkin. He was the Chief Guest at the Bombay premiere of Charlie Chaplin’s film Limelightin New Excelsior cinema. He also saw Mehboob Khan’s Mother India,Bimal Roy’s Sujata,Abbas’s Munnaand Satyajit Ray’s PatherPanchali. He was a great fan of Devika Rani.He even wrote a fan letter to Devika which finds mentionin Khwaja Ahmad Abbas’sI am Not anIsland: An Experiment in Autobiography.
As we all know that it was Lata Mangeshkar's patriotic song Aai mere watan ke logon...that made our first Prime Minister of India, Pandit Jawaharlal Nehru cry but it may come as a shock to you that even before Lata Mangeshkar sung this song in 1963, long before in 1948
a Mohammad Rafi song had such overwhelming effect on Pandit Jawaharlal Nehru that tears rolled down his cheeks!The song was Suno suno aye duniya walo bapu ki yhe amar kahani...'written by Rajendra Kishen and music composer Hussan Lal Bhagatram.
In 1957 Raj Kapoor produced Ab Dilli Dur Nahin  in search of justice a boy Ghaseeta decides to go to Delhi with Rattan to plead Hariram's case before Pt. Nehru. Similarly in 1967 film Naunihal a song was picturized over the funeral procession of Prime Minister of India, Jawahar Lal Nehru.

Posted by /bolywoodfiles.blogspot.com at 12:13:00 No comments: