Moushumi Chatterjee (born 26 April 1948) is an actress who is recognized for her work in Hindi as well as Bengali cinema. She made her film debut in the Bengali hit Balika Badhu (1967), and debut as heroine in the Hindi film Anuraag in 1972. Since then she has acted in more than 100 films as the main lead or a character role.
In this blog, we look into some of her memorable roles from Bollywood to Bengali films. She became a household name with the Bengali film Balika Badhu, directed by Tarun Majumdar. She played a child bride in the period drama, which became a platinum jubilee hit with a run of 75 weeks at the box office. In her next film a Bollywood film" Anurag", she played a blind young woman, Shivani, who wants to learn sculpting.
Balika Badhu (1967) - The film was based on a novel of the same name by Bimal Kar. The film was remade in Hindi as the same name in 1976 also directed by Majumdar. The movie is about child marriage, a custom that still prevails (illegally) among various Indian societies. Set during British Raj in India, the movie tells the story of a village schoolboy Amal, who is married to a younger girl named Rajni. Left together for a few days, as a part of the ritual, the two develop friendship and love. Shortly, Rajni must return to her parents’ house, while Amal continues with his studies at home with Masterji, an elderly teacher. His life is enlivened occasionally when Rajni is permitted to visit.For this role she was given Best Actress for her debut by BFJA 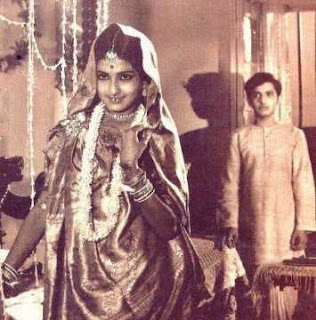 Anuraag (1972) -  is a 1972 Hindi film, directed by Shakti Samanta. The film stars Moushumi Chatterjee and Vinod Mehra in lead roles. Moushumi plays a blind sculptor in this film. She stays in an ashram and makes friends with a small boy (Satyajit), who is suffering from cancer. She falls in love with Rajesh (Vinod Mehra). Rajesh asks his parents to permit him to marry her, to which his mother agrees, but his father refuses under her present condition. Then, an eye specialist reveals that an eye replacement would cure her. Later, as a dying wish, the young boy donates his eyes to her, thus granting her eyesight for the first time in her life.
The film became a semi-hit while doing extremely well in big cities and won the Filmfare Best Movie Award for the year. Moushumi was nominated for the best actress award.

Roti Kapada Aur Makaan (1974) - was written, directed, and produced by Manoj Kumar. The film is about a family for which Bharat (Manoj Kumar) attempts to provide for after falling into a financial struggle. The film also stars Amitabh Bachchan as Vijay, the brother of Bharat, and stars Zeenat Aman as Sheetal, Bharat's love interest, Moushumi Chatterjee as Tulsi, a friend of Bharat in poverty, and Shashi Kapoor as Mohan Babu, a wealthy businessman. Moushumi was nominated as Best Supporting Actress for this film. 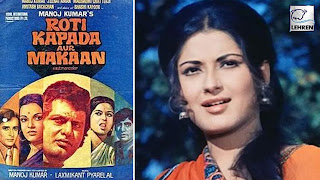 Angoor (1982) - Moushumi Chatterjee got the chance to hone her comedic skills and timing opposite Sanjeev Kumar. She played Sudha, wife to Sanjeev Kumar’s Ashok. She meets his well-behaved twin, also named Ashok, and mistakes him for her husband. Sudha tries her best to win him over and gives into her husband’s demands, much to the merriment of the audience. As the clueless wife, she hit every note right. 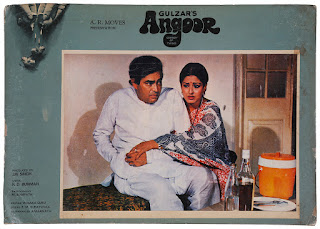 
Goynar Baksho (2013) -  horror-comedy, directed by Aparna Sen, involved three generations of women with a priceless box of jewels that links them together. The film starred Moushumi Chatterjee, Sen’s daughter Konkona Sensharma and Srabanti Chatterjee.
Moushumi played a ghost in this comedy film. She won a Filmfare East award for Best Supporting Actress for the part, while Konkona Sen Sharma won Best Actress.