Born on 8th Feb 1941 to simple parents in Sri Ganganagar, Rajasthan, Jagjit Singh was initially named, Jagmohan at birth, by his devout Sikh father. At the age of 24 without the knowledge of his family,Singh moved to Bombay to try his luck as playback singer in Bollywood. 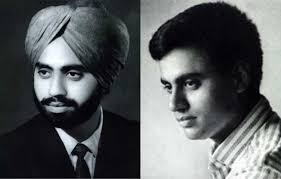 Initially he started as a singer of advertising jingles and later progressed to playback singing. However, what is little known about Singh's connection to Gujarati songs is that he sung his first Gujarati song in 1968, at Bharatiya Vidya Bhavan for Avinash Vyas's composition. This song was sung for Bhavan's 'Song of the Month' produced by Purshottam Upadhyay who paid Singh a sum of Rs250.
'Laagi Ram bhajan ni lagani, ke Ramna... ke Ramna thayi gayi che rag rag ni re bhu…'. This Gujarati song marked ghazal maestro Jagjit Singh's entry into the playback singing world. It was featured in producer Suresh Amin's film Bahuroopi and composer Ajit Merchant gave Jagjit Singh this first break in 1969.The success of this song,Jagjit Singh is said to have sung many songs in Gujarati, so much so that during his performances in Ahmedabad or any other city of Gujarat, tears were found rolling down women's cheeks. He was known to bring words to life as he sang, but when he sang Gujarati bhajans, he was known for connecting people of Gujarat to the Almighty.
In 1969 he married Chitra Dutta and both started singing together.The Unforgettable, which was the couple's first LP, was an unconventional recording and it turned them into stars. The song "Baat Niklegi" from the album achieved great popularity for the Singhs.It was the first time Western Instruments were used in Ghazals.Thereafter, the couple worked both on solo and joint musical projects and performed concerts worldwide.
The popularity of the couple attracted Hindi film Industry.The couple sang for the first time in the 1973 film Awishkar b kar do:ut Jagjit Singh got famous among Hindi Film Audience with the song Hontho se chhoo lo tum mera geet amar from the 1981 film Prem Geet in which he gave the music also.In 1982 he sang in 2 films,Saath Saath and Arth.The song "Tum Ko Dekha To Yeh Khayal Aaya" and"Tum Itna Jo Muskura Rahe Ho" were very popular.His compositions for the TV serial Mirza Ghalib (based on the life of the poet Mirza Ghalib), remain extremely popular among ghazal aficionados.
Besides ghazals, Jagjit Singh has also sung Bhajans and Gurbani(Hindu and Sikh devotional hymns respectively). Albums such as Maa, Hare Krishna, Hey Ram...Hey Ram, Ichhabal and also Man Jeetai Jagjeet in Punjabi, put him in the league of Bhajan singers such as Mukesh, Hari Om Sharan, Yesudas, Anup Jalota and Purushottam Das Jalota.
With a career spanning five decades and a repertoire comprising over 90 albums, "The Latest" by Sudarshan Faakir was the best selling album with his lifetime hit "Woh Kagaz ki Kashti...Woh Baarish ka Paani". It was the first album by the duo with poetry of only one Poet. In 1990 their son died in a road accident. Chitra felt unable to sing following this event.
He was awarded the Padma Bhushan by the government of India in 2003. In February 2014, Government of India released a postal stamp in his honour.He was regarded as one of India's most influential artists. With sitar legend Ravi Shankar and other leading figures of Indian classical music and literature,
in 2011 he  was due to perform with Ghulam Ali in Mumbai[5] but suffered a brain haemorrhage on 23 September 2011. He was in a coma for over two weeks and died on 10 October at Lilavati Hospital, in Mumbai.

Most Popular Ghazals from Hindi Films

Posted by /bolywoodfiles.blogspot.com at 11:14:00 No comments:

Vani Jayaram  with her crystal clear voice took the Hindi Films audience to a different world by rendering superhit Hindi numbers such as “Humko Manki Shakthi Dena…” and “Bole Re Papihara…’, both from Jaya Bhadurai-starrer ‘Guddi’.
Vani Jayaram was born(30th Nov 1945) in Vellore in Tamil Nadu, in a family of musicians.She was considered to be a child prodigy,She recognized the different ragas of Indian classical music before the age of five. Her voice was first heard on All India Radio, Madras, at the age of eight.
Vani Jayaram studied Carnatic music under the tutelage of Kadalur Srinivasa Iyengar, T. R. Balasubramanian and R. S. Mani. Her Hindustani classical music guru was Ustad Abdul Rahman Khan.After her marriage to Jayaram she settled in Mumbai, where she realized her dream.
She got her break in Hindi Films by  music director Vasant Desai in Guddi.She recorded three songs for Guddi, and "Bol Re Papi Hara," a song based on the Hindustani raga "Miyan Malhar", instantly made her an household name in India. For that song she was awarded the Tansen Samman (for best classical-based song in a Hindi film),
She went on to sing a few songs each for music directors of Hindi cinema, including Chitragupt, Naushad (a classical song in Pakeezah and a duet with Asha Bhosle in Aaina), Madan Mohan (a duet with Kishore Kumar in the film Ek Mutthi Aasmaan), O.P. Nayyar (several songs from the film Khoon Ka Badla Khoon including duets with Mohammed Rafi and also with Uttara Kelkar and Pushpa Pagdhare), R. D. Burman (a duet with Mukesh in Chhalia), Kalyanji Anandji, Laxmikant Pyarelal, and Jaidev (a duet with Manna Dey in Parinay and a solo in Solwa Saawan). Her songs in Meera (1979), composed by Pandit Ravi Shankar, won her the Filmfare Award.
Besides Hindi and Tamil, Vani Jayaram has recordings in other languages of India. These include some songs in Gujarati, Marathi, Marwari, Haryanvi, Bengali and Tulu, and a huge repertoire in Malayalam, Kannada, Telugu and Oriya. For her work in some of these languages, she has been awarded many prestigious awards. Vani won the National Film Awards for Best Female Playback Singer three times.

A Classical Song from Pakeezah (1972)

A Duet with Kishore Kumar  from Ek Mutthi Aasmaan (1973)

A lovely Duet with Manna De from Parinay (1974)

The Award Winning Song from Meera (1979)

Posted by /bolywoodfiles.blogspot.com at 10:36:00 No comments: 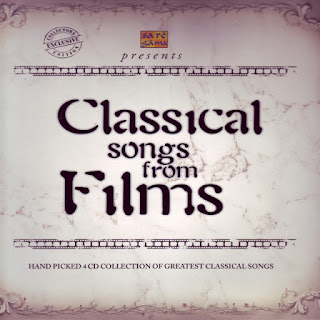 Among all genres, Hindustani classical music has had arguably the greatest impact on Hindi film music. Thousand of songs have been composed based on Hindustani ragas.There are some such songs those were sung by the Great Classical vocalists in Hindi films other than our great playback singers.
Great Hindustani vocalists, right from Pandit D V Paluskar to Ustad Bade Ghulam Ali Khan and Ustad Amir Khan,Pt Bhimsen Joshi,Kishori Amonkar,Pt Jasraj, Nirmala Devi have lent their voice to the Hindi films occasionally.
Some of these songs  are  Aaj gawat man mero in Baiju Bawra by Pt D V Paluskar and Ustad Amir Khan;  jhanak jhanak payal baje by Ustad Amir Khan from the movie Jhanak Jhanak Payal Baje, the title song in Geet Gaya Pathoron Ne, sung by Kishori Amonkar; and Humein Tumse pyaar kitna in Kudrat sung by Begum Parveen Sultana are known to one and all. A few others–such as prem jogan banke by Ustad bade Ghulam Ali Khan from Mughal-E-Azam and Ketaki Ghulab Juhi by Pt Bhimsen Joshi in Basant Bahar–are well-known .
Though these songs were not hit or popular among masses but they are precious gems.The trend of Classical Songs has diminished in our films but still there are some Music Directors who take the services of Hindustani Classical Vocalists. Vishal Bhardwaj in Maachis  composed a song with  Sanjeev Abhyankar. In this blog I have taken the songs sung by these great Classical singers.