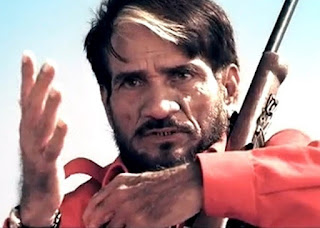 We all know him as Sambha of Sholay,We forget that he did 100 films before that.He came to Mumbai to become a cricketer, but joined theatre and became a Bollywood actor. He learned acting in the Filmalaya School of Acting in Mumbai.He  started his Hindi film career as an assistant with director Chetan Anand, before making his debut as an actor in his film, Haqeeqat in 1964.
Mac Mohan(24 April 1938 – 10 May 2010) acted in 218 films and remained popular as a rather sympathetic villain through the 1970s and 1980s with films such as Don, Karz, Satte Pe Satta, Zanjeer, Rafoo Chakkar, Shaan and Khoon Pasina,
He was Sunil Dutt's classmate in Lucknow, from where he hailed. Mac Mohan's wife Minny is an Ayurvedic Doctor. married  in 1986 and they had two daughters; Manjari Makijany, Vinati Makijany and a son Vikrant Makijany. He was the maternal uncle of actress Raveena Tandon.
He was particular about his clothes before getting into the industry. People would often call him ‘Kadak Ram’ because his clothes were always on point, well ironed and fitting perfectly. His sense of style was reflected on screen and he had a big contribution to his looks in his films.In all the films he appeared with the well trimmed beard
He was known for his unique style and physique from his college days. It was during his training at the Filmalaya acting school that he got noticed. He was picked to do a cameo in Aao Pyar Karen (1964) and you can see him without his beard, dancing in the song ‘Jhuki Jhuki Nigahen’. It is one of the few films in which you will see him without a beard.

Song from Aao Pyar Karen.1964
It was phenomenal to see the dedication he had for all his films, whether it was Sholay (1975), Don (1978), Kaala Patthar (1979), Shaan (1980) or television, documentaries, shorts, or the international and regional films he worked in. He approached all his work with the same amount of dedication and freshness.

Posted by /bolywoodfiles.blogspot.com at 11:47:00 No comments: