The Great Dacoit Films of Bollywood 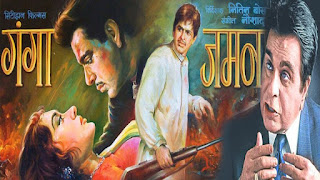 Nowadays dacoit films are not being made. This does not mean that dacoits have disappeared. They are very much there but they are not living in Chambal any more. Today's dacoits do not sit on top of a horse with a gun wearing the costume, black tilak marked on the forehead which we are familiar with.
In the '60s, '70s and '80s, this was one genre that guaranteed and spelt sure shot success. On my research, it was found that K L Saigal played the role of a dacoit in 1934 film Daku Mansoor.
The significant dacoit film of this decade was Paan Singh Tomar released in 2012, a biopic had Irrfan Khan in the role of the bandit who was finally killed in a police encounter in 1981. Here are a few dacoits films that are worth mentioning. 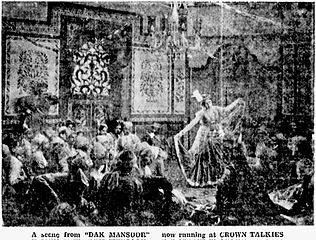 The film was produced by New Theatres Ltd. Calcutta and the music director was R. C. Boral.The cast of the film included K. L. Saigal, Uma Shashi, Prithviraj Kapoor, Husnbanu, Pahari Sanyal and Nemo. Daku Mansoor was actress Husn Banu’s debut film.The film was based on a Bengali folktale and involves the dacoit Mansoor (K. L. Saigal) and his love first for Paribanu (Husn Banu), and then for Meher (Uma Sashi), and ultimately the rejection of his way of life. 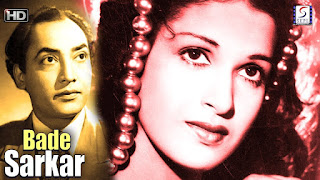 It is a 1957 Hindi romantic action drama film, directed by Kishore Sahu. The film starred Kishore Sahu, Kamini Kaushal, Durga Khote, Agha, Gope and K. N. Singh. The story told in a flashback by an elderly lady (Kamini Kaushal), involves a masked man called the Black Bandit (Kishore Sahu), who robs the rich in order to help the poor peasants. The masked man turns out to be the cruel Zamindar's
(landowner) son. 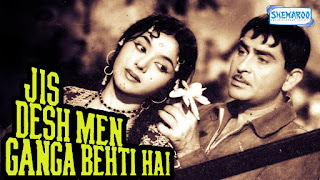 is a 1960 Hindi film directed by Radhu Karmakar and produced by Raj Kapoor. The film stars Kapoor, Pran and Padmini in lead roles.
Raju (Raj Kapoor) is a poor, friendly orphan who wins his bread by singing songs. One day, he sees an injured man and helps him. Later, he is kidnapped by a few bandits who mistake him to be an undercover policeman. Pran plays a Daku who  kills the Sardar and takes over; he wishes to forcibly wed Kammo. When Raju tells all the truth to the police, they decide to confront and kill the bandits. Raj begs the police to not kill them but is shunned. 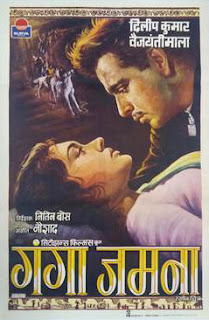 It is a 1961 Indian crime drama film, written and produced by Dilip Kumar, and directed by Nitin Bose, with dialogues written by Wajahat Mirza. The film stars Dilip Kumar (Muhammad Yusuf Khan), Vyjayanthimala and Nasir Khan in the lead roles. Set in rural Northern India, the film tells the story of two impoverished brothers, Ganga and Jamna (played by real-life brothers Dilip Kumar and Nasir Khan), and their poignancy and sibling rivalry on opposing sides of the law, one a dacoit criminal and the other a police officer. The film was also notable for its Technicolor production, use of the Awadhi dialect, and its rustic setting, and it is a defining example of the dacoit film genre. 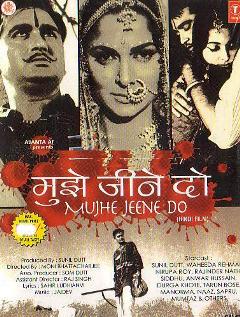 It is a 1963 Hindi film, directed by Moni Bhattacharjee and written by Aghajani Kashmeri. This dacoit drama stars Sunil Dutt, Waheeda Rehman, Nirupa Roy, Rajendranath and Mumtaz.
Shot in the Chambal Valley ravines of Bhind-Morena under police protection in Madhya Pradesh state, and Mohan Studios, Mumbai the film highlights the acting talents of its star cast; Waheeda Rehman and Sunil Dutt, The film was a major success. 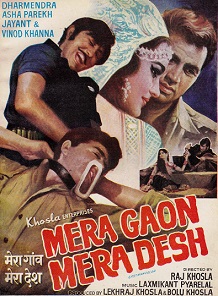 It is a 1971 Indian film, directed by Raj Khosla.starring Dharmendra in the lead role and Vinod Khanna as a dacoit. Dharmendra plays Ajit who meets Anju (Asha Parekh - lead female) and both fall in love. Ajit comes to know of Jabbar Singh (Vinod Khanna) a dacoit who is terrorizing the surrounding community, and Ajit decides to take on Jabbar. In retaliation, Jabbar abducts Anju, and instructs Ajit to come unarmed. Ajit decides to follow these instructions, however, as soon as he reaches Jabbar's hideout, he too is captured, and at the mercy of Jabbar and Munni (Laxmi Chhaya), who has been scorned by Ajit, and it is now up to her to decide Ajit's fate. 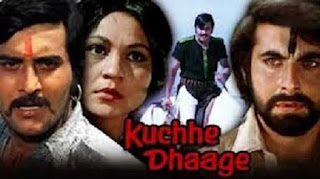 It is a 1973 Bollywood action film directed by Raj Khosla. The film stars Vinod Khanna, Moushumi Chatterjee and Kabir Bedi.The film is about dacoits, particularly in the Chambal Ravine there are abundance of bandit gangs, chiefly consisting of Brahmans and Thakurs, both carrying on their age-old rivalry and hatred for each other from generation to generation. Our story revolves around Brahman Pandit Tulsiram who betrays Thakur Bahadur Singh to the police, and as a result Bahadur is sentenced to be hanged. Widowed, pregnant and devastated, Bahadur's wife swears that she will raise her child to hunt down and kill Tulsiram at any cost. She gives birth to a son, names him Lakhan, and lets the bandits teach their way of life. As soon as Lakhan grows up, he kills Tulsiram. Hearing of his father's death, army-man, Roopa, resigns and openly swears to kill Lakhan. 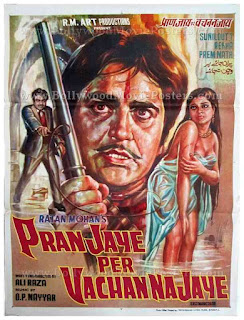 It is a 1974 Hindi film produced by Ratan Mohan and directed by S. Ali Raza. The film stars Sunil Dutt, Rekha, Iftekhar, Premnath, Jeevan, Bindu, Madan Puri, Ranjeet and Jayshree T. Raja Thakur(Sunil Dutt) is a bandit, but a bandit with a difference. He is principled, he has respect for women, and is a man of his word. So when he assures Seth Dhanraj that he will deliver his missing daughter, Sheetal, to him even if he has to sacrifice his life, one can do nothing but believe in him. Raja Thakur does find Sheetal, only now she is known as Janniya(Rekha), a dancing courtesan. 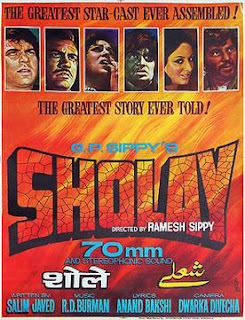 It is a 1975 Indian action-adventure film, written by Salim-Javed, directed by Ramesh Sippy, The film is about two criminals, Veeru and Jai (played by Dharmendra and Amitabh Bachchan, respectively), hired by a retired police officer (Sanjeev Kumar) to capture the ruthless dacoit Gabbar Singh (Amjad Khan). Hema Malini and Jaya Bhaduri also star, as Veeru and Jai's love interests, respectively. Sholay is considered a classic and one of the best Indian films. It was ranked first in the British Film Institute's 2002 poll of "Top 10 Indian Films" of all time. In 2005, the judges of the 50th Filmfare Awards named it the Best Film of 50 Years. 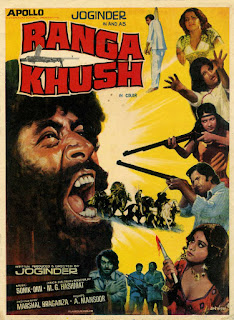 This film was released in January 1975 in the banner of Apollo International.It was acted,directed and produced by Joginder.Ranga, the bandit chief terrorises many villages and the police cannot catch him. A poor villager Sultan Singh lives with his son Karma and daughter Devi. Ranga kills Sultan and kidnaps Devi. Karma tries to organise the villagers against Ranga and his gang of dacoit to save his sister. 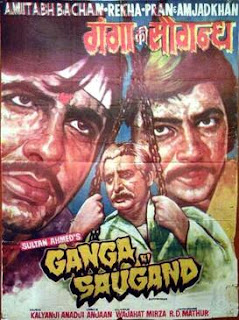 It is a 1978 Hindi movie. Produced and directed by Sultan Ahmed, this film stars Amitabh Bachchan, Rekha, Amjad Khan. This movie is set in a village setting where Amjad Khan is a tyrant. Amitabh plays a very naive young man, and becomes a dacoit to avenge the death of his mother. Amitabh is thrown out of the village when he is unable to offer a satisfactory explanation for the death of the cow. He forms a group who work in throwing Amjad Khan off his high throne. 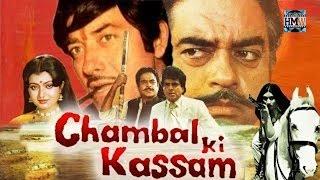 Chambal Ki Kasam is a 1980 Hindi action movie directed by Ram Maheshwari. The film stars Raaj Kumar, Pradeep Kumar, Shatrughan Sinha, Moushumi Chatterjee, Farida Jalal, Amjad Khan, Bhagwan and Nirupa Roy. The film is about the life of a dacoit, Thakur Suraj Singh (Raaj Kumar). He was the son of a zamindar, but his parents were killed by the dacoit Zaalim Singh. In the confusion, Suraj got separated from his brother and sister. When he grew up, he becomes a dacoit in order to take revenge upon his parents killer. After Suraj killed his parent's killer, the dacoit Zaalim Singh's son (Ranjit Singh) tried to take revenge on Suraj. 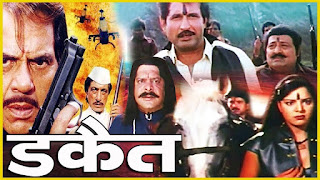 Dacait is a 1987 Indian film directed by Rahul Rawail.The movie stars Sunny Deol, Meenakshi Sheshadri, Raakhee and Raza Murad. It is based on how a simple-living guy transforms into a dacoit after being oppressed by the Zamindars of the area. The plot is based in the Chambal area, which is the confluence of three states UP, MP and Rajasthan and has been ignored for development since independence. 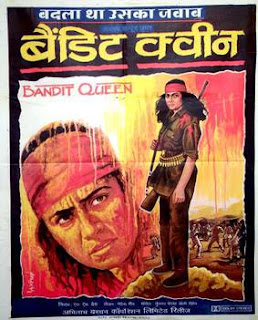 It is a 1994 Indian biographical film based on the life of Phoolan Devi.  It was directed by Shekhar Kapur and starred Seema Biswas as the title character. The music was composed by Ustad Nusrat Fateh Ali Khan. The film won the National Film Award for Best Feature Film in Hindi. Seema Biswas who played the role of Phoolan Devi got the National Award for Best Actress. The film was premiered in the Directors' Fortnight section of the 1994 Cannes Film Festival and was screened at the Edinburgh Film Festival. The film was selected as the Indian entry for the Best Foreign Language Film at the 67th Academy Awards but was not accepted as a nominee. 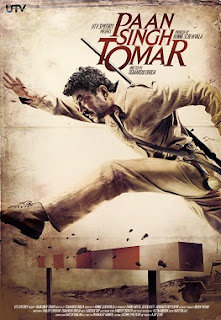 It is a 2012 Indian biographical film based on the true story of the athlete of the same name. A soldier in the Indian Army, he won a gold medal at the Indian National Games but was forced to become a bandit. The film is directed by Tigmanshu Dhulia and produced by UTV Motion Pictures. Irrfan Khan plays the title role, with Mahie Gill, Vipin Sharma and Nawazuddin Siddiqui in the supporting cast. The film won the Best Feature Film and Best Actor in the 60th National Film Awards 2012.

Here we present to you some of the famous Dakuus/Dacoits/Bandits of Hindi cinema other than above films. 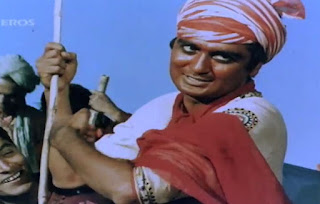 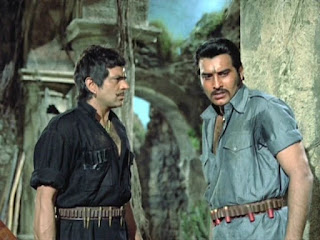 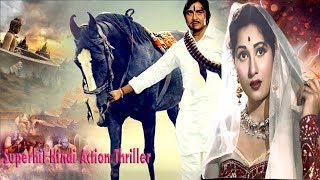 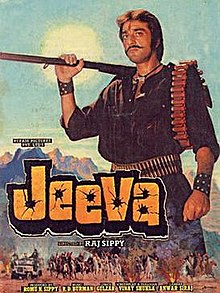 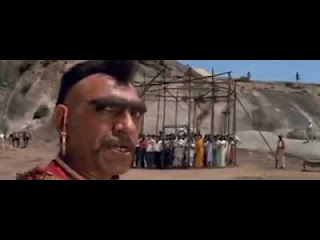 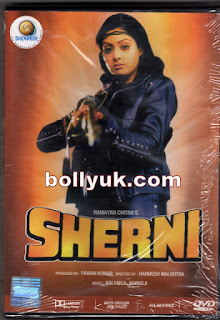 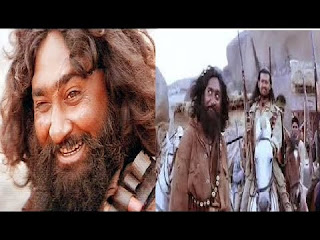